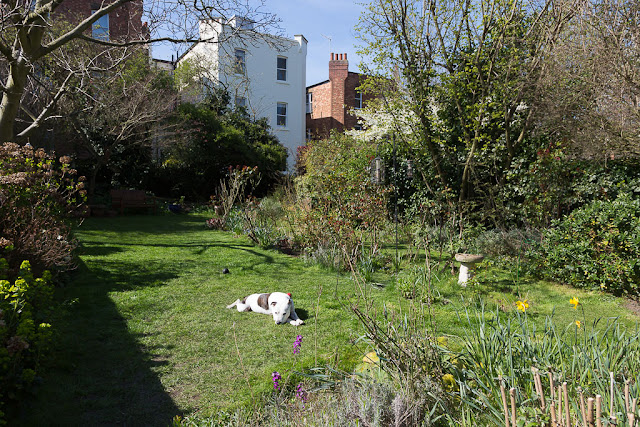 I spent a lot of time in the garden yesterday, both working and relaxing. For one thing, I gave the lawn its first mowing of the year. It seems a little early, but the grass was very shaggy and the ground was dry enough, so why not? I think the natural world is slightly ahead of its usual spring timetable because we had such a mild winter. 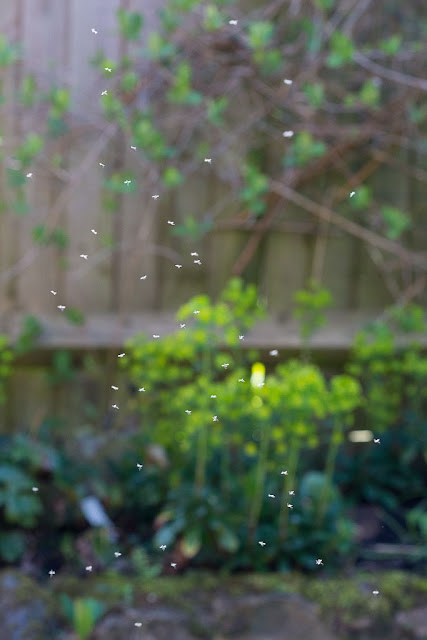 The harmless little flying bugs that congregate in airborne clouds are out already. I have no idea what they are, but photographing them was an interesting challenge! We love watching them fly when the weather gets warm. I try to make our chemical-free garden a haven from the "insect apocalypse" facing the rest of Europe and the planet. 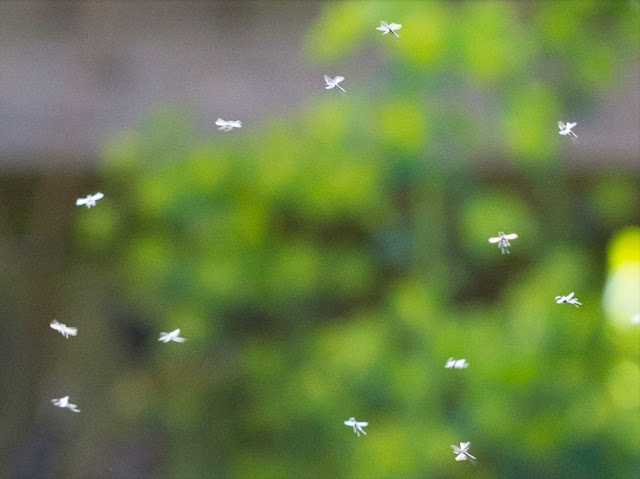 With Olga's dog-walker no longer able to come because of the lockdown, and us only allowed out once a day for exercise, I held off on walking her until the afternoon. We went up to the high street just to see what's going on. There were a surprising number of people out, all things considered, some carrying takeaway coffee, or sitting on benches with a companion. (I'm assuming they're sitting with people they live with, and not visiting with friends. Let's give them the benefit of the doubt.) 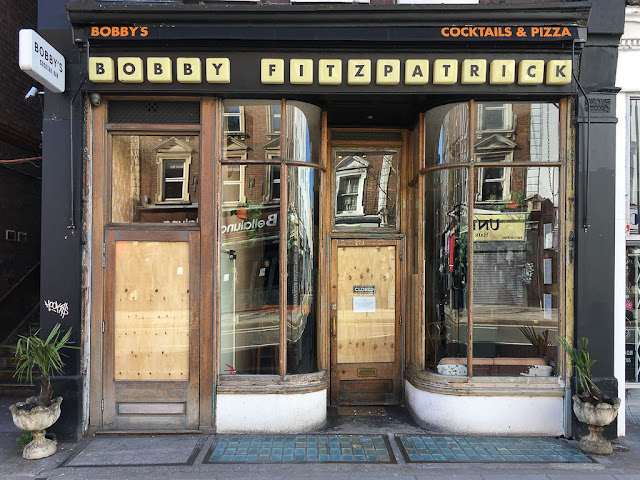 Some shops were open, even one or two that don't seem very essential. (Cookware, anyone?) But other establishments are boarded up. 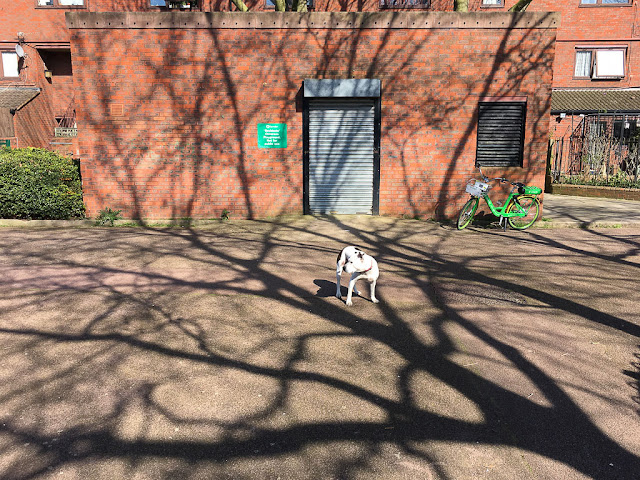 We had some very dramatic sun-and-shadow photo opportunities. 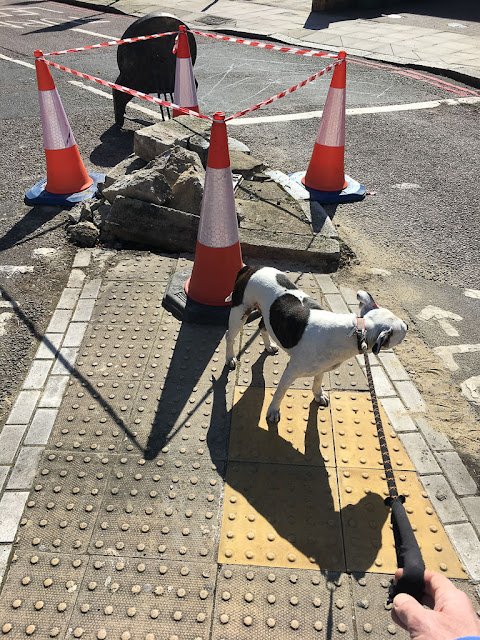 Olga got a little stroppy. She knew something was different and wanted to go to the cemetery, but I didn't want to take a longer outing right away. I'm still not sure what I'm allowed to do and what I'm not under these new rules. So we stuck to the neighborhood and kept our distance from everybody.

Then I took a pair of clippers down to the once-viney tree and pruned the new sprouts of hops vine from around its base. I am going to kill that vine if it's the last thing I do.

I also had a chat with Mrs. Kravitz, she standing on her upstairs balcony and me in our side yard. She started badgering me again about replacing the fence. I pointed out that the landlord has just replaced the side gate and trimmed the tall cypresses in the front garden, both things she'd complained about. Nonetheless, she said she's going to write a cranky e-mail to our property managers. You do that, I thought. I'm staying out of it. (It's not like we all have bigger problems to worry about at the moment, right?!)
Posted by Steve Reed at 6:29 AM

Bless Mrs. Kravitz' heart. She needs to hook up with my ex and his attorney.

Does Dave know that you were sweet talking with the delectable Mrs Kravitz? As for the nameless flying insects, they are not nameless at all. The top one is Frank. Then there's Jeff, Doug, Tim, Ginger, Lucy, Muhammad I, Muhammad II, Muhammad III, Lloyd, Harriet, Willy, Sigmund, Winston, Bruce, Noddy, Donald, Sylvester, Mary, Tamara, Vera, Violet and the bottom one with the skinny legs whose name is Stephen.

Ooh, so sorry you have to deal with Mrs. Kravitz. Maybe she should just put up her own fence. Our restrictions are much more clearly defined, which does make it all a bit less stressful. Right now your sunny garden looks like the Costa del Sol and our dreary, rainy one looks like England.

Well, isn't she special? The queen of stroppiness. (and no, I'm not talking about your dog).

My,my. What a big garden you have. And thank goodness, too, since you have Olga.
I could be uncharacteristicaly charitable and say Mrs. Kravitz is venting her worry about the virus by fussing about the fence, but in reality she's more likely just being her usual fusspot.

Stellar Work In Olga's Garden There - And Beautifully Captured Flying Whatevers - On My Ride Yesterday, Wish I Could Have Captured Them Like You Did - Tons Of Them - They Make Unusual Sounds When Bounce Off My Helmet - Keep Walking And Snapping Off Photos - They Are A Real Gem

I'm thinking we'll have our second mow of the season this weekend. Unless Mike goes wild & does it while I'm at work :)

A neighboring county (the one with Charlotte in it) just issued a shelter in place order, but apparently my job is still considered essential even in that order (our county hasn't issued anything, but I was curious so I checked it out). I don't actually think I AM essential, and I think I could do a lot of work from home. But we're trying to be careful, and I'm not going anywhere else.

Mrs. Kravitz is a piece of work isn't she?

I was just noticing the little swarms of flying bugs in our yard yesterday. I may have to try and photograph them. Not something I had ever considered before. Well even in a time of incredible stress and crisis, a global pandemic, it's interesting to find that some people maintain their ridiculous unneighborly ways.

You did a great job photographing those flying insects. I remember seeing those in the spring when I lived in a different climate. I agree about your neighbor. There are many more things to worry about than a fence.

I think for the time being we have to follow the rules even if we don't like it. we are allowed to be out but keep the 2 m distance.

Your garden looks wonderful. Olga seems to approve of it too. Mrs. Kravitz is just being Mrs. Kravitz. I'm glad you are being careful. You have a wonderful day, hugs, Edna B.
p.s. Amazing photo of the little flies.

Not to be pedantic, but Mr. Pudding got the flying insects mixed up. The top one is Jeff, and *then*there's Frank. People always get those two confused because they both have the same wingspan.

Here in America, Fox News and the Lt. Gov. of Texas (age 63) are urging older Americans to die in order to save the economy. I'm 64 but I'm not shuffling off the mortal coil until I get to see BTS in concert and I don't give a damn if millionaires have to do without a dividend or two.

My apologies Vivian. You are of course quite right. Jeff has a little scar over his right eye that he acquired in a schoolyard incident. BTS? You mean the South Korean boy band? There is no accounting for taste.

Olga seems to be pondering, "Where is everyone?"

Oh, we're all going to get very touchy about things here very soon, I believe. Simply because we can't wrap our heads around the BIG thing. But of course Mrs. K. has always leaned that way so this is nothing new for her. She's just contrary. It occurs to me that such things don't bother me in the least. Life must be very difficult for people like that.

Good job on the garden furniture! I just checked in! Beautiful. Your little bugs are amazing, how you captured them is magic , If the lock down -stay home is supposed to go as planned it will last right up into summertime. I don't mind at all, especially not having a pooch to worry about. Stay well

I think it's a wonderful thing to have a garden right now. To walk out your door and have grass underfoot and the sky overhead. And no covid.

The grass with its new haircut looks great. Love the photo of the bugs flying. Elizabeth's comment made me snort with laughter - thanks, Elizabeth :)

YP: Dave retreats indoors whenever Mrs. Kravitz appears, like Juliet, on her balcony. Thank you SO MUCH for clarifying the individual identities of all our little gnats!

Mitchell: That was exactly what I said on one of your recent posts -- my comment that somehow disappeared. We've swapped weather! The fence IS our responsibility, apparently, but the thing is, it doesn't NEED to be replaced. It's perfectly fine.

Marty: Yeah, she'd be saying all this even without the virus -- although I DO think she's channeling some omnipresent inner angst.

Padre: Do you ever make Go-Pro films of your rides? I'd love to see one. And I bet you could capture footage of some insect activity then!

Bug: The determination of who's essential and who's not all seems very arbitrary. I wonder if you could arrange to work from home, whether your office is closed or not? Seems like they'd allow it if it's possible.

Robin: It's fun to try to make the camera do things you haven't thought of before!

Sharon: I love how nature's cycles are intact, even in the midst of all this craziness.

Red: Yeah, that's basically the rule here -- we're allowed out once for exercise and also to shop, and that's it.

Edna: Thanks for the kind words!

Vivian: Hopefully you're living for more than BTS! Ha! But yeah, talk like that is not going to win fans among senior voters (who, I would guess, are largely Republican).

Catalyst: I wonder if she notices any difference at all in life on the streets? She knew our walk wasn't long and we took our morning route in the afternoon, which seemed to weird her out.

Ms Moon: I think she creates a lot of misery for herself and everyone around her.

Linda Sue: In some ways, this lockdown is kind of fantastic. I'm getting a lot done around the house!

37P: YES! The garden makes a big difference, although to be honest, even some sunny windows would probably be enough.

Jenny-O: Thanks! And the bugs say thanks too!

great pics of the little gnats. everything is early here to. and confused it seems.