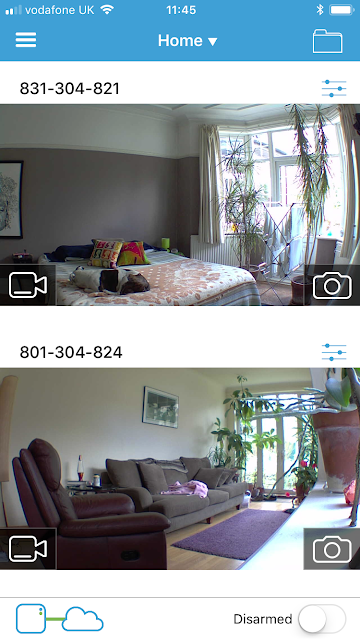 You might remember that a couple of years ago we installed "Olga cams" in our flat, to keep an eye on the dog while we're away. Well, those cameras stopped working when we got our new Internet router -- somehow they're not compatible with the new technology, and don't ask me why.

So Dave bought a couple of new cameras. This (above) is what I see when I check them on my phone.

On one hand, they're smaller and more mobile than the older ones. That top camera, for example, isn't usually in the bedroom -- I just put it there on this particular day. (And how fortunate I did, because Olga, as you can see, decided to spend the morning in bed!)

But the pictures they produce are much smaller and I'll be darned if I can find a way to enlarge them.

See that little control at lower right -- the one that says "disarmed"? If I tweak that button, it arms the cameras for motion activation. Then it produces an image or a short movie whenever someone or something moves around. I tried it yesterday, and it filmed Olga's dog walker picking her up for her walk. (Almost literally picking her up -- she didn't want to get off the couch.)

And then, because I forgot to turn it off and Dave got home before I did, it filmed about a hundred ten-second clips of Dave sitting in his recliner, eating chips and watching "Star Trek: The Next Generation":

Such exciting lives we lead.
Posted by Steve Reed at 7:18 AM