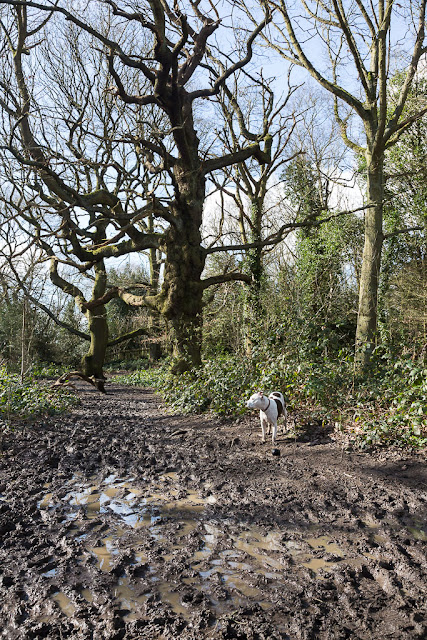 The ever-mercurial English weather gave us a sunny day yesterday, so Olga and I went to the Heath. Predictably, given all the rain we've had recently, it was a mud bog. I had to very carefully pick my way through some slippery quagmires, but I managed not to fall. Fortunately I wore an old pair of shoes, and they'll never be the same! 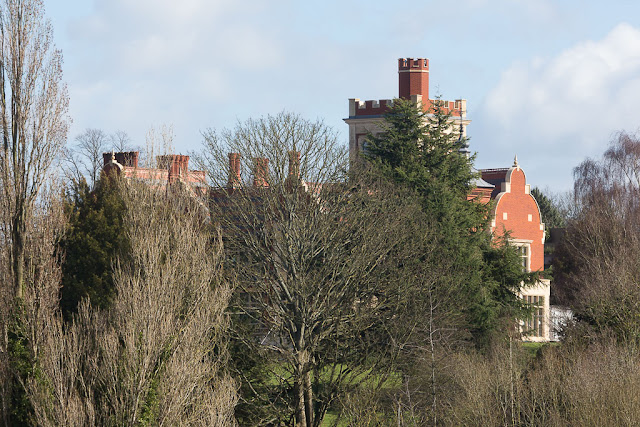 Remember how Athlone House used to be covered by a giant shed? Well, the shed is gone now. The trees block a clearer view of the end result, but it looks pretty nice! 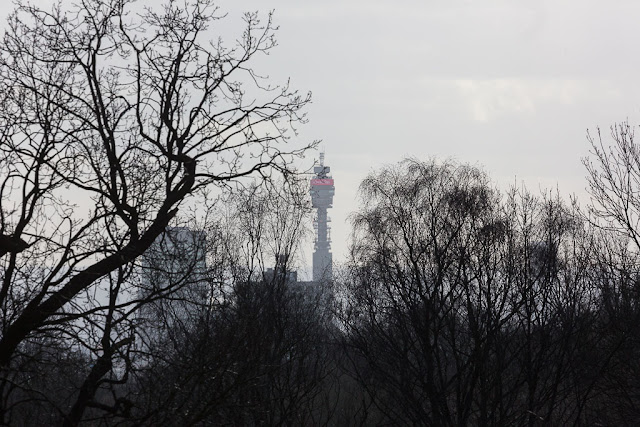 From a hilltop near Kenwood House, we could see the BT Tower, a red band circling the top for St. David's Day. 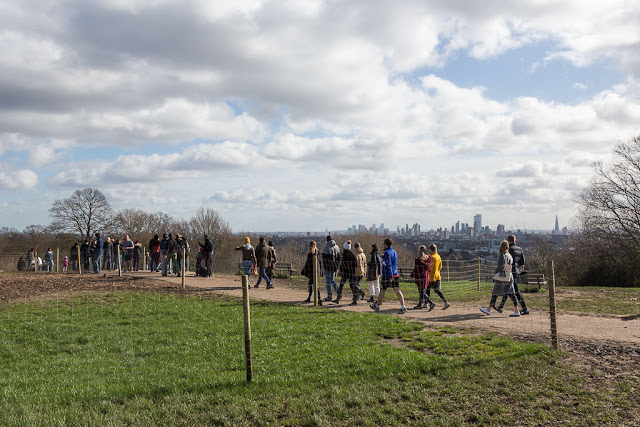 On Parliament Hill, fences have been erected along the paths and at the top, I assume to prevent the crowds from trampling the grass. It's easy to damage the turf with too much foot traffic at this time of year, when it isn't growing and the ground is soft.

A guy was sitting alone on a bench nearby, wearing headphones and singing at the top of his lungs. Everyone took it in stride. Further on, a woman was talking on the phone, telling someone where to find her. "I'm by the singing man," she said. 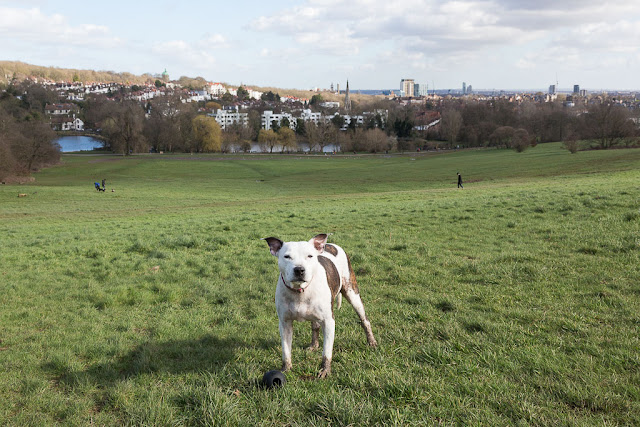 Olga seemed to be listening intently!

After we got home, the washing machine repairman showed up. He liberated our t-shirts and ordered a new door latch, which should arrive in a few days. He'll install it at no additional cost, and we'll be able to do laundry again. Woo hoo!
Posted by Steve Reed at 6:13 AM

I remember trying to get through some mud like this on a walk years ago up on the downs. The mud sucked my foot down and I left my shoe behind, lol. We were young then and thought it was really funny, couldn't stop laughing. Not sure if I'd be the same now that I'm old and grumpy, lol
Briony
x

I am not a fan of slippery mud on public footpaths. It can be treacherous. No matter how careful you are, it is very easy to fall down. Roll on the days when our paths are dry again!

Oh, Olga! I’m in love with that pooch. I hope Singing Man didn’t stop singing before the woman’s friend found her. I remember those muddy walks in Connecticut. We bought ourselves knee-high rubber boats that we would hose off. We had to be careful though not to let the boots be sucked off our feet by the mud.

So did Olga need a bath after the repair person departed?

Trying to imagine a repair person in the US making two home visits for the price of one...nope. Can't imagine.

Love the photo of a very intent Olga.

I Really Enjoy The Olga Photos And Love The One Of Here And Her Blanket From A Few Post Ago - Speaking Of Which, Dig The Ray Bradbury Post As Well - Enjoy The New Month

So many people out walking!
And yes, that construction on Athlone House turned out beautifully! At least from that angle.
"By the singing man." That's perfect.

gotta love that kind of self confidence, singing out loud in public to music only you can hear.

That is a lot of mud! I'm glad you managed it without falling. I love all the views from the top of hill. I wonder if that singing guy is a regular since he was being used for directions.

You would be quite a mess if you fell in that mud puddle.

I wonder if the lost lady was found sitting near the "singing man." I love it! I imagine Olga needed to soak for a while in the tub to get all the mud off her. I love the photos. I never heard of a shed over a house. Interesting. You have a wonderful day, hugs, Edna B.

Did you acquire Olga in England? As a puppy? I don't recall ever hearing her life story.

Can you help me understand what I'm seeing in the first photo - it looks like a smaller tree is growing out of the footpath (to the left of the larger tree). I've enlarged it but still can't make sense of that part.

It's always helpful to have a pair of old shoes around for mud walking days, although looking at those paths, boots would seem more useful. A repair person who didn't charge is quite an unusual occurrence in any country.

Am I right that the repair person came on a Sunday? That's the really unusual thing to my mind. I assume he charged for the initial call; it will probably take him 30 seconds to put the latch in.