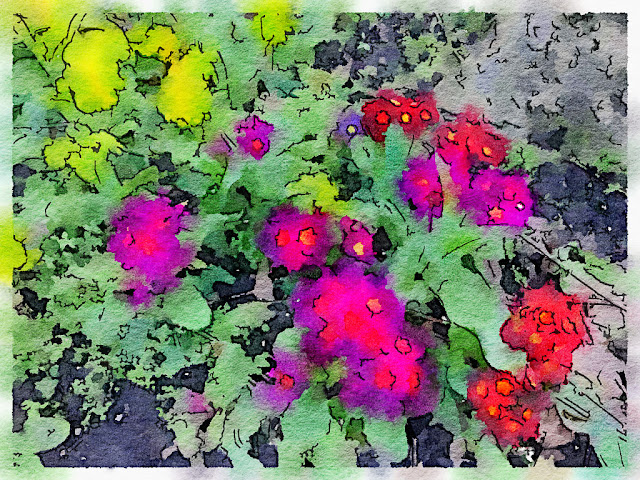 Last week I took a photo of some primroses in a flower bed on the high street, and ran it through my Waterlogue app. This is what emerged. It's a little scary how easy it is to produce impressive "art" with modern technology!

Library madness continued yesterday -- a steady stream of customers. I seriously think I may be the one person in the entire school who has contact with the most other people. Parents come with their kids and see each other and wander around the building and collect belongings and those in music classes have to pick up instruments. But virtually everyone comes to the library, and winds up at my desk.

As I told one mother, it will be a freaking miracle if I don't contract this virus, based on my number of contacts alone. We were joking -- gallows humor -- but I do worry a little about it. I even took to wearing latex gloves yesterday, not only to protect me but to protect everyone from me. I mean, what if I'm one of these people who has it but isn't symptomatic? I could be Typhoid Mary sitting there.

Anyway, here are the numbers to back me up. Last Monday and Tuesday -- normal school days -- we logged 231 circulations, including 87 involving equipment (computer or phone chargers, calculators or headphones). But over the last two days, we logged 1,233 circulations -- more than five times as many as the previous week -- and they were all books, except for 32 board games.

(I'm unclear on whether "circulations," as logged by our library system, means just checkouts or both checkouts and check-ins, but never mind. We haven't checked in much this week at all.)

Obviously that doesn't mean I've dealt with 1,233 people, because one person often checks out a big stack of items. But still. I've certainly seen dozens of people, and probably more than 100. 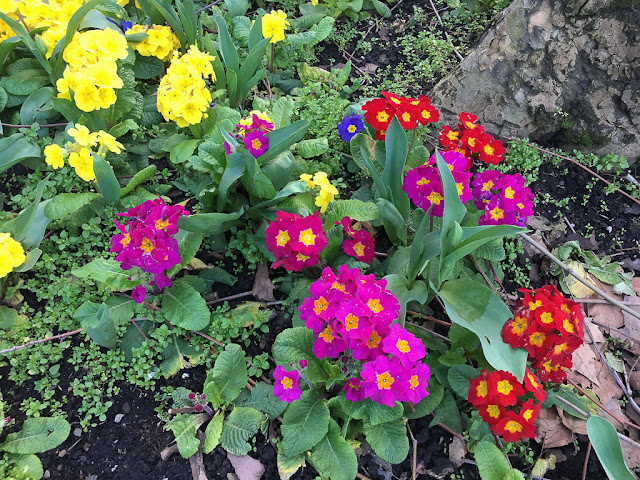 Anyway, I have one more day of library duty, and today I'm splitting my shift with a co-worker so I don't have to go in until 11:30 a.m.

The world has always been full of risk, though. I came across this little item online yesterday evening, a list of the things that killed people in London back in 1721: 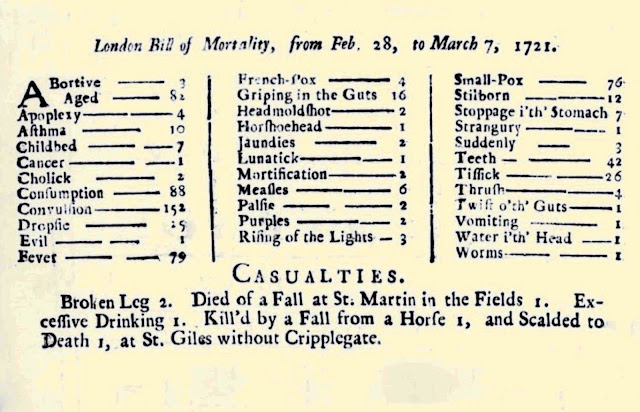 Apparently these "bills of mortality" were published regularly in newspapers nationwide. They began as a way to keep track of plague deaths, and then continued in this form in subsequent years. They focused solely on Church of England burials in London, so they're not a comprehensive snapshot of the country as a whole, but they're still interesting. Look at all those bizarre maladies!

Here is a fascinating blog post from the University of Nottingham that explains some of the terminology. I doubt dying from "Rising of the Lights" was as nice as it sounds.
Posted by Steve Reed at 6:10 AM

Give me the real photo anyday!!

Spare a thought for my youngest son who is a theatre sister in a hospital. They have just had a talk and been fitted with the masks that they 'may' need. He's not a happy bunny because it means he may be pulled away from his hospital to go to the larger one and work on people on respirators. He is in the front line to catch this thing but can't stop work, likewise paramedics etc.
The flowers are beautiful, if you had said you had painted them I would have believed you, thus, don't believe everything you see and read these days.lol
Keep safe
Briony
x

I see that one human died of "Evil". Fortunately I have been inoculated against evil which lurks round every corner with his sidekick - COVID 19. It was nice to find you referring to computer chargers once again. You had not mentioned them in quite a while and I was missing them.

Your photo is beautiful, but your "watercolor" is gorgeous. I was surprised to see that the most deaths were from convulsions. Very interesting. Take care, maybe you need a mask? You don't want to catch anything. You have a safe, wonderful day, hugs, Edna B.

I believe "lights" were lungs.
A lot of people died due to "teeth." How very strange.
I'm so glad that soon you won't have to be dealing with so many people. That scares me for you, Steve.

Both photos are beautiful, the original and the watercolor.
You really are dealing with a lot of people, a scary thing to be doing right now. I think a mask is a good idea. Please take care there and stay well and healthy.

I look forward to reading the terminology explanations and learning a thing or two. So often, in reading, I come across old terms for illnesses and have no idea what they are.

Gorgeous photo and "water colour." You can even print it on water colour paper. We behave as if we're already infected to make sure we don't put anyone else at risk. But, at this point, there aren't many anyone elses to worry about... at least not very often. And we are being so careful. When a package is delivered... left at the door, I unwrap it, safely discard the wrappings, and wash my hands thoroughly. Stay well!

I love the 'water color'. It really does look as thought it's actually painted. Lot's of activity in the library. I suppose parents are trying to think of everything their kid will need while they are at home. That mortality list is quite sobering. I wonder how the name "rising of the lights" came about.

I wonder what Lunatik and Purples is. You are right to be concerned especially with Dave being compromised. the gloves is a good idea. so far no confirmed or suspected cases in my county but I'm still staying home.

Half of those reasons for death I've never heard of and I'm very,very old!

I love the watercolor! I might have to get that app - it's very soothing. I hope you're able to dodge this virus, but my goodness that's a lot of contact! I'm off to read about the illnesses. I'm really interested to see what some of these are!

It took me a while to realize that the "f's" are actually "s's" and thus to realize that the 152 people died of convulsion. I was horrified by the various causes of death but then comforted by reading that only one person met his maker as a result of excessive drinking.

What a fascinating list--dying of mortification, evil, or suddenly, and yes, rising of the lights, what on earth does it mean?

Looking forward to reading the link about old terms for illness, but in the meantime I just wanted to say that every time I look at "Excessive Drinking" it looks more like "Effective Drinking" to me. lol

The primroses are beautiful in either picture. I generally prefer my photos straight up, but this watercolour transformation is pretty nice as well.

Briony: Oh, absolutely. I don't mean to imply with my whining that there aren't people who are in much more challenging circumstances than I, professionally. I'm sure your son will be OK, though, with all that training and equipment. Our health care workers deserve a huge round of applause and bonuses for dealing with this crisis.

YP: "Evil" was apparently a term for scrofula, or tuberculosis that takes root in the lymphatic system. It was called the King's Evil, or something like that. Who knew?!

Edna: Yeah, and who knows what that means. Any number of things could make someone collapse -- strokes, heart attacks, fevers. I suppose convulsions could be any of those.

Robin: They say masks are ineffective anyway. I don't want to freak the kids out by sitting there with a mask. I just washed my hands CONSTANTLY.

Mitchell: It's good to be careful! I'm doing the same, at least as much as my job allows. (And now I'm home so my contact will be VERY limited.)

Sharon: I don't know what the "rising" bit is about. Maybe pneumonia or something, breath becoming shallow? Who knows.

Ellen: I don't know what "lunatik" is, but syphilis can cause dementia, so maybe it's that. "Purples" was apparently an illness that caused blood vessel damage -- can't remember if it's a fever or convulsions or what.

Bug: It WAS a lot of contact. Fingers crossed.

Padre: Wasn't that bizarre? "Horfehoehead" is actually "horseshoehead," which apparently has to do with deformity of the skull while delivering a baby. Or so I read.

Catalyst: I'm guessing a LOT of them met their maker through excessive drinking, with that root cause obscured by some other more transient illness. (Like now!)

37P: "Suddenly" is the one I don't get. Does that literally mean just dropping dead, suddenly? (And presumably without explanation?)

Jenny-O: Effective drinking! LOL! That's a SOLUTION, not a problem!