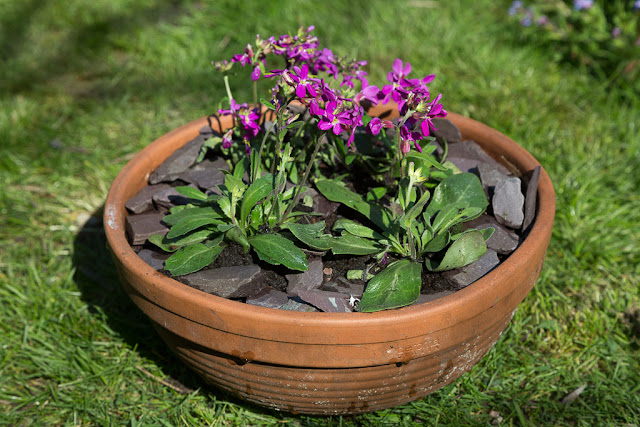 For me, yesterday was kind of like the movie "Groundhog Day." I was back at Sainsbury's in the morning, because of course I forgot some stuff when I went the day before. I like the orderly, crowd-controlled way we're all doing our shopping now. It's nice to stand in a well-spaced line and walk through aisles that aren't packed with people. Anyway, I got my eggs and potatoes and Dentastix and then decided to drop by Homebase on the way home.

Only...Homebase was closed. Apparently some time between Wednesday evening and Thursday morning they decided they weren't an essential retailer after all. Not only were they closed, but they were giving away all their seasonal plants in front of the store. I saw people leaving with carloads of primroses, pansies, and hanging baskets. Now that £1 I paid for a flat of primroses the day before looks like a rip-off! Everything's relative, right?

Anyway, I picked up another polyanthus and a flat of something called Arabis, or rock cress (above). I've never heard of it, but I like it. I also grabbed a pot of sad-looking daffodils that I figured no one else would want. 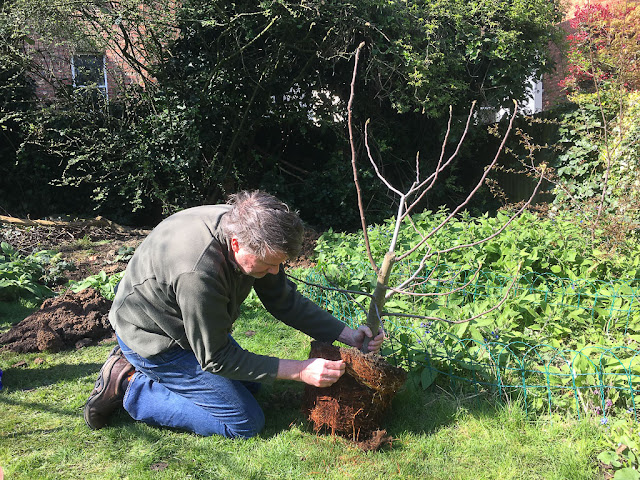 While I was doing all this, Dave was planting our little fig tree. You may remember I rescued it several years ago, and it's been living in a big pot on our patio, but it was getting increasingly root-bound and last year it didn't look as healthy as the year before. So we decided to put it in the ground.

While I potted up the Arabis, Dave took care of the fig and put the sad daffodils at its base. They'll come up fresh and new next spring. 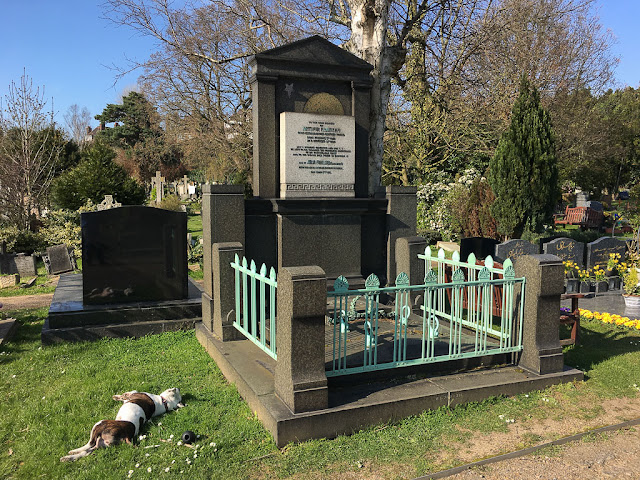 Then Olga required a walk, so she and I went back to the cemetery. We heard the turaco again, and Olga had several good rolls in the sun.

I kicked off a cataloging project for work -- basically revising the Dewey Decimal numbers for books in our Lower School to make them simpler. I have to keep doing something for the school during this time, to justify my salary. I have a few other library-related tasks lurking in the wings.

Oh, and I mentioned the free plants from Homebase to Mrs. Kravitz. She leaped in her car and drove over there, and returned with what must be 100 plants: 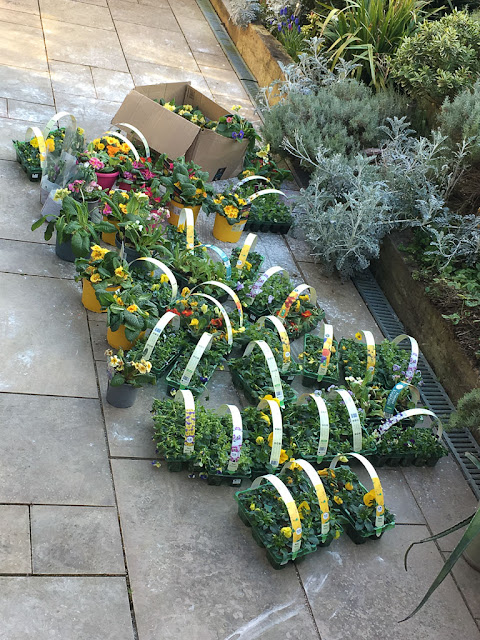 I don't see how she's going to be able to use all those. (I take back what I said yesterday -- that it's impossible to have too many primroses.) If I were a betting man, I'd bet they're going to sit on her patio in their pots, unwatered and untouched, until they die and she throws them all out. I've seen it happen before.

Some people, when you say "free," go a little crazy.
Posted by Steve Reed at 6:33 AM