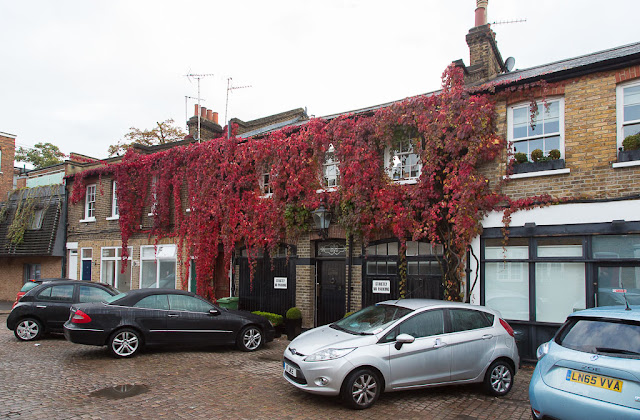 I just had a terrible night's sleep. I woke up around 2:30 a.m. and I couldn't get to sleep again -- not soundly, anyway. For one thing, the covers were in disarray, with the bedspread sliding to the floor beneath the blanket, which was pulled up way too high, and the sheet was in a wad somewhere beneath it all. If it had just been me in the bed, I'd have gotten up and remade the whole thing.

Also, the dog's face was jammed into my stomach so firmly that I could feel her eyes twitching. I could have moved her, I suppose, but she weighs 40-plus pounds. And you know how even the smallest tasks seem monumental in the middle of the night.

When I finally did drift into a doze, somewhere around 5 a.m., I had very weird dreams. I dreamed that Dave was buying shrimp from a man who brought it to our back door. I said to him, "We have a walled garden. How is that man getting shrimp to the back of the house?" No answer. Par for the course in my dreams, which are not great on plot resolution. 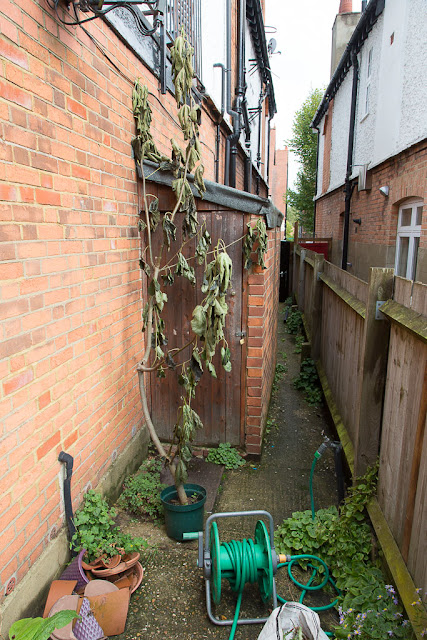 In other news, see that dead-looking plant? It's a fig tree. I found it, in much livelier condition, while walking the dog about a week ago. It was leaning against the public recycling bins near West End Green, and even had a helpful paper label attached to one of its branches: FIG TREE. Clearly someone expected it to be adopted.

I brought it home, marveling that such a big tree could grow in such a tiny pot. But then I realized the pot once had roots growing out the bottom, and those roots were cut when the tree was moved. Which is why it promptly withered away.

I considered throwing it out, but it smells so nice. Fig trees have the sweetest, most amazing aroma. They remind me of Morocco. Besides, they're vigorous growers, and I'm thinking we may be able to save it.

Dave and I have debated what to do. I think we're going to put it in a bigger pot against the wall in the photo -- it's a southern exposure and definitely the sunniest, warmest part of our garden. I hope the tree has enough roots to keep the wood alive until it can recover from its shock and regrow some leaves. We may prune it way back so it won't have to support so much growth right away. For the time being, we've moved it to a shadier spot at the back of the garden -- our plant ICU.

(Top photo: Colorful grape leaves in a mews near the West Hampstead tube station, yesterday.)
Posted by Steve Reed at 6:49 AM

I expect the debate that you and Dave had about the fig tree had more serious intellectual content than the two recent US presidential debates. Was it "facilitated" by Olga?

To be honest I probably would not have rescued this tree, but it's great you did and even better if it reminds you of long ago times in Morocco. Hope the tree survives the cuts.

I hope your Fig ICU is successful! You are right about the aroma.

I have two fig trees and have never noticed their smell at all. Is something wrong with me? I'd cut it way back. WAY back. Poor thing. It needs love.
Ugh- insomnia. And yes- everything in the middle of the night is too large for humans to deal with. At least for this human.
"Plot resolution"- ha! Yes. Dreams are sorely lacking in that!

I do hope that fig tree survives, it would be a nice addition to your wonderful garden. I hate nights like you described. I've had way too many of them lately.

I have 2 fig trees in my garden. They are about 4 years old. One is quite lively, with some lovely leaves (but no fruit so far!) The other died, so I cut off all the branches to put on the bonfire, and threw the stump and roots onto the compost heap, and now it has wonderful healthy leaves growing from the base. Who knew? By the way, I've never noticed any smell from the trees either. As for dreams, I wouldn't dare tell you mine, except last night I dreamed about Martin Platt from Coronation Street. As Coro fans will know, he was married to Gail, but left the soap several years ago to go away and make specialist cheeses. (A happy release I should think!) But in my dream he was serving burgers from a van, along with one of my ex-husbands. I don't want to even think what that says about my subconscious!

I hope you can save that tree. I am continually fascinated by your English existence. Strangely it brings back memories of my own time living in London as a child, things I didn't know I remembered. The familiarity of the scenes (like this one of your side yard) takes me by surprise every time.

I'm sorry you had a bad night. But your description of Olga so tightly glommed to you made me laugh-cry! So something good came of it ... for me only, I realize, but thank you :) I hope your fig tree responds to your care. My mother loves to take a half dead (or nine-tenths dead) plant and see if she can bring it back. Very often does, too.

Not sleeping is a pain. At my age I quite often sleep poorly. It's surprising how plants can come back after abuse.

I do hope that your tree ICU is a success. I have been told several times to only cut something back by a third for what that's worth.
I have the same problem with troublesome nights sleep. Apparently we never go back into a deep sleep and it never helps if the room is too warm. Hope tonight is much more restful for you.

Those grape leaves are wonderful. Hope you get the fig tree back to good health.

Good luck with the fig tree, I think it will be touch and go to revive it but if you don't try you won't know.

YP: And neither of us sniffed as much as Trump.

Kaki: It looked better when I first rescued it! In its current condition I would probably have left it behind. But now I'm committed to the effort.

Sharon: Jet-lag, in your case!

Lesley: OK, that dream is hilarious. As for the fig, from what I hear, they're very robust. I think your severe pruning may be just what this one needs! (Absent being thrown onto a compost heap.)

37P: I can see how that photo would take you back. It's a very distinctive London kind of architecture,to have a side alley like that.

Red: Plants are made to survive. When you think about it, they go through a lot in the wild. It's only our soft hybrids that get so sensitive!

Cheryl: I'll have to read up on it. I think my grandmother used to cut her fig down almost to the ground. But I'll do some research.

Catalyst: Aren't they great? They really put on a show.

Alpha: Exactly. It's worth the minor effort.

I hope your fig survives. I'm always rescuing plants from the bargain corner of the garden centre. My intensive care treatment includes liquid seaweed extract and sulphate of potash. All the best.karen