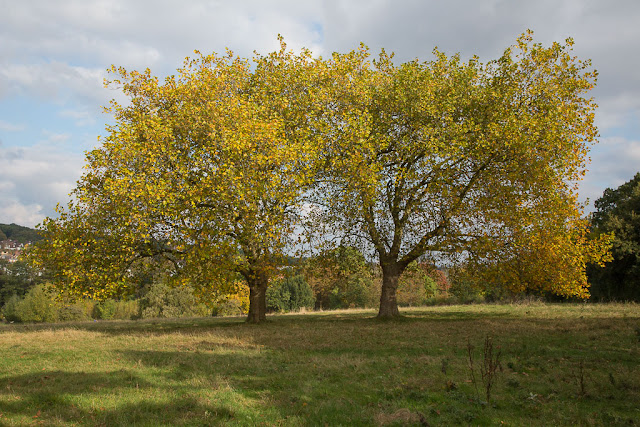 I took the dog to Hampstead Heath yesterday, where things were looking very autumnal. Olga had a long romp and managed to get in a fight with another dog. I didn't see what happened exactly, because I was taking a photo at the time, but suddenly there was lots of growling at my feet and Olga was wrestling with a black spaniel, chomping on its ear. The fracas lasted a micro-second and there was no blood, thankfully. I suspect the spaniel got too close to the Kong.

And that was just one of about a hundred things I did -- little things that have been nagging at me for weeks. I glued the broken doorsill in the bathroom, and replaced the molding at the base of the bathtub. I descaled the kitchen kettle -- something that I never had to do in America, where electric kettles are not "a thing," but that's essential here in London where the mineral-laden water tends to leave behind white deposits. I trimmed the garden and collected a full bag of garden waste. I did laundry. I filed a bunch of paperwork. I tried to replace a bulb in our floor lamp that dramatically exploded a few nights ago, but the new bulb doesn't work, which makes me think the lamp itself is on the fritz. I organized and archived all my recent photos.

It was good to get so much done. I did not read a word of "Swamplandia!" I think I am destined to be reading this book forever. 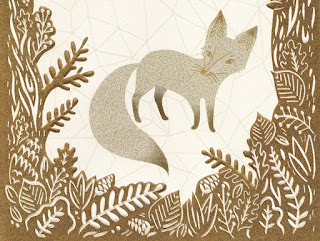 I got a birthday card from my mom in Florida, and on the front -- a fox! So appropriate, given the vulpine denizens of our London garden. (Of course, there are foxes in swampy Florida too -- but still. It seems like a very British card.)

Oh, and you might like this brief video. Remember how my portrait is going to be in an art exhibit, and is on display in the Regent's Park tube station to drum up publicity? The video introduces some of the artists in the upcoming show, including my colleague Martin, who did the portrait. And remember how I said I wanted to see the poster before it got damaged or graffitied? Well, sure enough, someone has graffitied it. They wrote "EGG" on my forehead. I'm trying not to take it personally. (In elementary school I was widely teased with the moniker "egghead," and the fact that as a nearly 50-year-old I am still cursed with that name ought to be amusing, I suppose. But I find it weirdly hurtful! My inner six-year-old is alive and well.)

Finally, last night Dave and I sent to see Petula Clark perform at the Theatre Royal, Drury Lane. I bought tickets several weeks ago when I saw an ad in the paper -- I had to seize the opportunity to hear "Downtown" live! Dave barely knows who she is, but he had fun too. She did not disappoint. Despite the fact that she is 83 years old (!) she still has the voice, and she performed a full two-hour show -- including most of her '60s hits, numerous new songs and versions of The Beatles' "Blackbird" and "With One Look" from the musical "Sunset Boulevard." Apparently Tony Hatch, who wrote many of those old hits, was in the audience too -- I wouldn't know him if I fell over him. The crowd seemed to be mostly people 10 or 15 years older than me, with a smattering of young gay couples thrown in. (Petula's songs were used in the late '90s as the soundtrack for the movie "Billy's Hollywood Screen Kiss," which helped cement her in the minds of a younger generation of gay men.) Anyway, it was a fun night!
Posted by Steve Reed at 7:10 AM

Lovely birthday card, happy birthday for whenever it is and Petula Clark is 83! How can that be?

EGG. Some people are so predictable and so unimaginative. And they have to disfigure everything.

Well, happy birthday whenever!
Reading about your weekend activities (you are sure you did all this in just one weekend??) leaves me exhausted. And now I have that tune in my head for the rest of the day, I am not going downtown. Well done!

May I call you Humpty Dumpty? When Martin said you have a striking face, does that mean people light matches upon it?

Seriously though, it's marvellous - first to have your portrait painted by a skilled artist and then to see it presented in such a public place.

Should Olga be muzzled after the vicious incident with the harmless spaniel?

Well, it had to happen. of all the words they could have written, that one is fairly benign. so I guess these posters aren't protected under plastic. busy productive days are good. I like those kinds of days.

Good that Olga and the spaniel emerged unscathed. I agree with Ellen - it's remarkable that in today's world the graffiti was so low key, but funny how we never quite forget those childhood slights.
And with my well water at home, gotta say I wouldn't mind learning your de-scaling technique . . .

I'm sitting here simply stunned at the thought that Petula Clark is 83 years old. That is simply unbelievable to me. It's good hear that she can still sing. Age is not always kind to the vocal chords.
Sounds like you had a very productive weekend as opposed to me. I was busy all weekend but I don't think I accomplished anything productive with the possible exception of filling out the entry form to enter 5 pictures in an upcoming exhibit.
Personally, I always thought of "egghead" as a bit of a compliment. When I was growing up, it only got assigned to the smart kids.

I would say that you are Mr. Energetic for accomplishing so much in a weekend. I have had electric kettles for years (English husband) but with town water no problem with limescale. I find them much superior to boiling water on a stove.
It is lovely to think that Petula Clark has aged so well that she has a strong voice and can still perform.
And a very Happy Birthday whenever it was. I do like your fox card.

No. Petula Clark cannot be 83. This is not possible. It is also not possible that Olga got into a fight. And you say it's your birthday? What?
I'm so confused.

Wow, you got a lot done ... and I'm glad there were no injuries in the scuffle between the dogs. Happy Birthday! Love the card! I, too, can't believe Petula Clark is 83, especially since I just checked a youtube clip - she still looks so young. Interesting video of the art and artists. That is such a lovely portrait. When I think of you, though, I see you smiling as in the photos you have posted. My inner six-year-old gets wounded from time to time as well ... but pity the people who operate on a six-year-old level in EVERYTHING they do :)

Petula Clark 83? I can't believe it! Petula clark is on of my favorites.

I, too, am stunned that Petula Clark, whose songs I used to play on the radio when I was a dj, is 83. But then I realized that I am 76! Ye-gods to both! Just this morning my wife remarked that she has a son celebrating his 64th birthday today and that really makes her feel old. Life passes before our eyes and we barely notice it.

I laughed out loud. I hope we can still be friends.
:-)
Kate

Alphie: Thanks! I imagine that person thought they were being terribly clever! The birthday is in a week or so.

Sabine: It left me kind of exhausted too! :)

YP: You mean the harmless but nosy and interfering spaniel.

Ellen: True, it could have been worse.

Marty: The de-scaling technique was simply to buy a commercial de-scaling fluid, made with formic acid. It's designed for use in kettles and other kitchenware and appliances. Maybe you can find it in the states.

Sharon: I know -- her age really is stunning. She was almost 30 when she recorded "Downtown"! She was born before my mother! I think when kids called me egghead it had more to do with shape than content, but I suppose there could be an element of the latter, too. :)

Cheryl: Are you in the states? I didn't think electric kettles were even available there, since the voltage is different. Our electrical current is twice as strong as the states, so water boils pretty quickly. Thanks for the bday wishes!

Ms. Moon: My actual bday isn't until early November. Don't worry -- I didn't try to slip it past everyone. :)

Jenny-O: It's funny how we never quite outgrow past slurs. As Ellen said above, I suppose it could have been a lot worse!

Red: Isn't she great? Dave didn't know much of her music, so I've been able to introduce him to her work.

Catalyst: Time flies, right?! It's alarming! One thing I like about blogging -- it helps us stop and take notice. Don't you think?

Whew - your list of tasks is exhausting! I need to have a similar day VERY soon though...

Um, I watched that video and all I have to say is that "egg" is very unimaginative, unlike the artist who spoke after your guy. I guess I'm a little too conventional because ewwww! :)