Dingbats of All Kinds 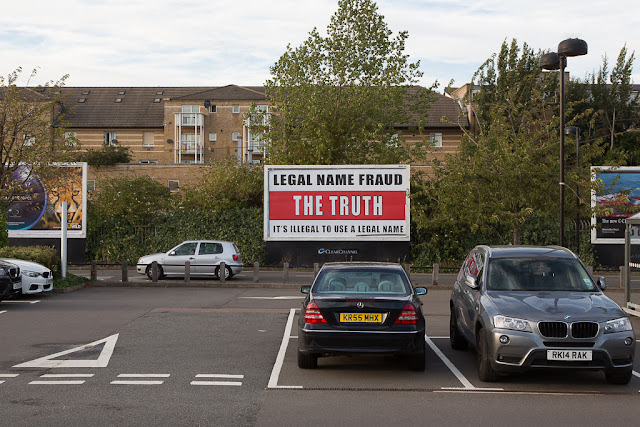 When I was at Homebase last week I came across this very strange billboard near the parking lot.

I thought, "What on earth could that mean?"

Well, I looked it up. (Isn't the Internet wonderful?) Turns out these billboards have been appearing all over the country. The BBC looked into the mystery and linked the message on the signs to a Canadian who apparently has some cockamamie ideas about government.

The argument appears to be that when when we're named by our parents, that name is appropriated by the government in the form of birth certificates and whatnot, creating a legal entity separate from us as a person. Because the government owns that legal entity, it's potentially fraudulent for us to use our names.

Which, legal experts agree, is crazy.

Anyway, the real mystery is who's paid for all these signs, which, to quote the BBC article, "potentially cost hundreds of thousands of pounds." Nor do we know why the signs are in the UK, when the person most closely linked to their message appears to be based in Canada. (She apparently has a radio show -- whether Web-based or broadcast I'm not sure -- and I'm guessing she wants to scare up listeners.)

There's a web site that explains all this, kind of -- except that the explanations, as far as I can tell, make absolutely no sense. So go there at your peril.

In other news, I had French class yesterday -- and only as I was leaving for class did I realize I'd misplaced my textbook and notebook. They were nowhere to be found in the house. I took them to work Friday so I could do my homework -- and Dave and I carried them with us when we visited the Regent's Park tube station (as mentioned in my previous post). So I called Dave, who had already left home for the day, thinking they were in his bag -- but they weren't there either.

I went to class sans books, which gave me a good excuse to not participate in the homework review. And then, midway through class, I suddenly realized where they were -- I'd left them on the checkout stand at Waitrose, one of our local grocery stores. We'd stopped there on the way home Friday night.

After class I went back to Waitrose and there they were, right where I'd left them. (Apparently they don't clean off the checkout stations very often!)
Posted by Steve Reed at 8:34 AM

How do these crazy people get radio shows and money for billboards? It does make one wonder!
I can't believe you found those notebooks exactly where you left them a whole day later. That really is amazing in such a busy city.

You are lucky you found your books...as for the other, tame compared to our body-grabbing idiot! Ever seen the BBC program Filthy Cities? Puts history in a new perspective. Thought of you when I was watching the first and second episodes on London and New York.

So much insanity in the world right now. So much.

Now it would take a kook to come up with such a twisted idea as name fraud. There are many other name frauds we should be concerned about.

There are strange people everywhere :)

I would have skipped class! Very nice that your books were still there. Clearly higher learning is not in demand.

The above comments have already covered my ideas about the billboard person.

I'm in catch-up reading mode today and I'd like to say I'm so impressed with your face on the poster in the tube station.

Sharon: It WAS amazing. I couldn't believe no one had cleared the counter. I think this person's radio show is on the Web. I imagine it's not very hard to webcast a radio show -- all you need is a server and some recording equipment, right?

E: I haven't seen filthy cities, but I have no doubt London was filthy in its day. It has its moments even now.

Ms Moon: Indeed. Is it always here, or has it ramped up lately?

Red: I know! Such a peculiar idea.

Jenny-O: I almost skipped. But the classes aren't cheap, so I figured I'd better just go and do my best. The instructor loaned me his book for the duration.