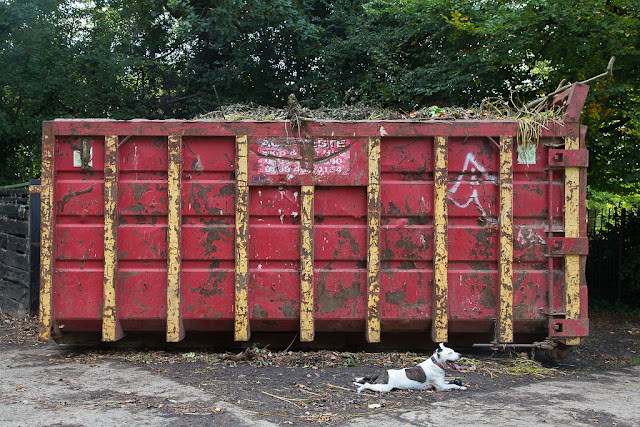 We didn't watch last night's presidential debate, but I'm glad to read that it went more or less as one might expect. No massive revelations or sudden bursts of intelligence from the Republican candidate.

Oh, Donald. You are so finished.

This election has turned into such a ridiculous display I can't see how anyone, anyone, could still be stumping for Trump. His "very, very" inarticulate statements don't even make sense. And yet I have at least two Facebook friends, both from high school, who continue to post pro-Trump, anti-Hillary stuff. One of them is a woman. One was in the Navy. Neither went to college.

Seriously, it fascinates me. I just don't understand. And there's no doubt they represent a swathe of the U.S. electorate. Fortunately, it appears to be a losing swathe.

Here in England, we're having our own political dramas. The U.K. has finally decided to begin accepting unaccompanied minors from "The Jungle," the migrant camp in Calais, France. About 28 of them have arrived so far, and some critics have questioned whether they're really minors. Granted, some of them look older -- and coming from places where record-keeping is probably pretty lax, they don't exactly have birth certificates. I doubt even some of them know their age for certain. Then again, they've been living in harsh circumstances, and as all of us know, sometimes certain photos, certain angles, just make people look older. Does it really matter? They supposedly have family members in the U.K. already, and holding them in limbo in France serves no one's needs.

We never did figure out what was going on with that helicopter yesterday morning. My boss, who lives not too far away, heard it too and went to Twitter for answers -- but could only find tweets from people saying, "Hey, what's that helicopter up there for?" Not very helpful!

(Photo: Olga near a big brush bin just outside Golders Green Park, on Saturday.)
Posted by Steve Reed at 6:57 AM

If we are meant to be letting children in then they should be children. Some of those fellows can remember John Lennon's death and once they are in England, you can bet your life that France won't take them back. I have a cousin in California but that doesn't entitle me to emigrate to America.

You are not a refugee from a war-torn or authoritarian country, YP. (Although Brexit makes it feel that way sometimes.)

Seriously, I can understand not wanting to reward people who are lying, or who have managed to make their way to the border illegally (and thus encouraging more people to try). But on the other hand, making them stay in France isn't a solution, either. What purpose does it serve to keep families apart, or to increase the alienation of young people who need to establish healthy connections? I think it makes sense to admit them, and help France rid itself of this carbuncle of a camp. We're not talking about a large number of people.

We'll build a wall. A great big wall right along the south coast of England and who's gonna pay for it? Yeah, Afghanistan. They're gonna pay for the wall. That's right.

Entering England on the back of a blatant lie is simply unacceptable.

I did watch the debate and it was simply horrific due to the fact that even if there's a micro percentage chance that that man will become president, it's too much.

The election continues with scary situations. the whole election is rigged idea could lead to greater problems after the election if trump refuses to concede. What will Trump supporters do if he doesn't agree with his loss?

All western countries, including GB, are wealthy enough to accept refugees and they all should do their duty. I wish all these countries would be willing to take refugees on an agreed rate and refugees would accept the country they were alloted to (possible existing relatives considered). What we all need is candour and willingness on all sides!

We didn't watch the debate - we watched baseball (go Cubs!). But I have some very hilarious friends who kept me posted on the debate on Facebook, which makes it somewhat tolerable :)

I didn't watch it either, instead I went to a National Geographic lecture from Lynsey Addario, the photojournalist who has photographed many war-torn places. It was a fascinating talk about the places she's been and the things she's seen. Steven Spielberg is in the process of doing a movie about her which according to her stories, should be an "edge of the seat" experience.
I recorded the debate but, after hearing all the news updates this morning, I doubt I'll watch it. It isn't going to change my mind. Donald Trump is an embarrassment to this country and a political disaster and that's that. My biggest concern is that we will have 4 to 8 more years of no action because people hate Hillary as much as they hate Obama. In fact, John McCain has already said he will block ANY supreme court nominee that Hillary sends their way. If he's not going to do his job, he needs to go!
Okay, that's enough of that!
That is one giant brush bin in your photo!

I'm three for three...didn't watch any of them. the comments on FB as they progressed were entertaining though.

I did not watch the debate; I was at a gathering of a group of women that I considered to be friends. I was horrified, however, to realize that most of them were Trump supporters. (This is not a political group.) Most of these women are well educated, professionals and yet are "undecided" or "hate Hillary." Boggles my mind and made me realize that this dreadful soul has more supporters than people probably realize...

I have not been able to watch the debates as I cannot watch or listen to Trump. That people can support him just appalls me.
I cannot wait for this election to be over and hope by some miracle the Democrats sweep the lot so that perhaps we can get things accomplished again in this country.
I don't have to love Hillary to feel that she is the only candidate qualified for the job.

I read a Canadian editorial recently which postulated that many people are, rightfully so, fed up with the usual establishment candidates and methods, and although Trump would not be a good president, their feelings are bubbling to the surface and he is the only one really listening to them and promising to do something about it. I doubt he can do anything, but the angst of a broad "swath" as you called it has to be considered at some point, I feel. I am definitely not pro-Trump, but I see the point that was being made and I also see the problems with the "old guard." Unfortunately Trump has caught a ride on the current of those feelings.

I've read your post and I've read the comments. All very interesting. Speaking strictly as an outsider I'm relieved to see the red section of the bar grow smaller. There will always be people who are for the 'other side'.

And on a less international and political note, that's a HUGE bin, did they trim a forest?

Maybe I new game show is order? How Not to Stump the Trump.