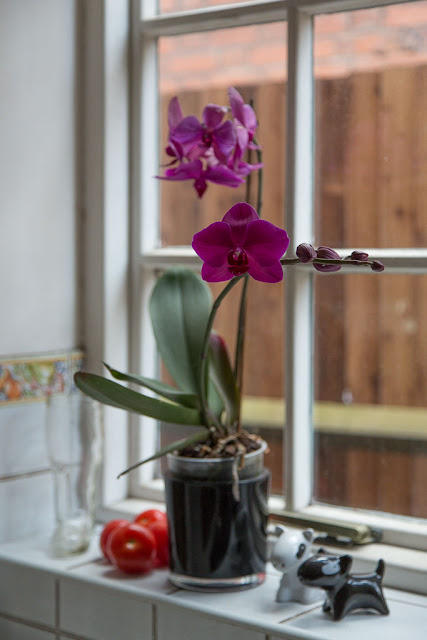 Remember the orchid we got in June 2015 from my retiring coworker? (I'm sure you don't, but here's a link.) It looked fantastic for a long time, but slowly the old blooms have been fading. In fact I cut off one of its two flower stalks not long ago, after all the blossoms fell off. I expected an eventually flowerless plant.

Several weeks ago, though, it sent up a new flower stalk. Ta-da! New blossoms! (The old ones are on the stalk in back.)

This is a huge triumph for me. I've never owned an orchid that I was able to get to bloom again. People say growing orchids isn't hard, and I guess that's true, once you get the gist of watering them (frequent watering, very good drainage). This one usually lives in the bathroom, where it gets good humidity, but we recently moved it to the kitchen because the bathroom radiator is so effective we feared it would roast the flowers. 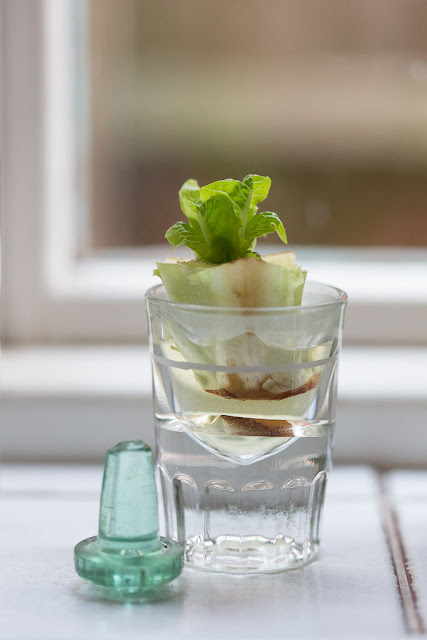 Also on the kitchen windowsill: Dave recently learned it's possible to grow new lettuce leaves by putting the cut-off end of a head of baby gem lettuce in a glass of water. We're trying it, and by golly, it works! I can't imagine we'll get more than a teaspoon of salad from this venture, but it's kind of amusing.

That green thing, by the way, is something I found on Hampstead Heath. We think it's an old glass drawer pull, or maybe a bottle stopper.

In other news, I think my solar keratosis has returned. That's the tiny scaly patch on my forehead that comes from spending too much time in the sun. I went to the doctor about it last summer, and got some medicine that I was supposed to apply for two months. I stopped after about a month because I could no longer find the spot. But it seems to have come back, so now I'm using the medicine again. This time I suppose I should keep going for the full two-month period. Sigh.

Finally, did you hear about the handsome chai walla in Pakistan who has a new career as a model, thanks to an observant photographer?
Posted by Steve Reed at 6:47 AM

I'm not a fan of a whole windsill full of orchids as often seen, I must say, but to see a single plant in bloom is really nice. Your experiment with the cut-off end of lettuce is definitely something I will try too! Things can be so easy.

That is an old bottle stopper. I am quite a fan of old bottles and have several similar stoppers. I love the way old green tinted bottles catch the light. Look out for one in a junk shop. It would look nice on your windowsill and the stopper wouldn't feel so lonesome.

Good job on the orchid! I can keep them alive but just don't seem to have a good place for them to actually bloom again.
I've done the lettuce thing too. It is amusing. You can do it with celery. Just set the bottom of a celery plant in water as you did the lettuce. The baby celery stalks are so darn cute. I've never had any luck with any of it getting very big though and always end up throwing the whole thing out.
That bottle stopper is a lovely treasure!

Plants quite often surprise us by rising from the dead. When it's an orchid it's a bonus.

I had not heard about the chai walla so thanks for the article. He is quite handsome!
I'm impressed that you got that orchid to bloom again. I have never been able to do that or maybe I simply don't have the patience to wait long enough. And I had never heard you could do that with lettuce! The two of you have magical green thumbs!

I love orchids but have a black thumb. I saw one the other day at the grocery store that was quite different - creamy blossoms with pink lines throughout in a kind of wild cross-hatch pattern. I had to get up close to decide that it was actually real. I just couldn't take that plant home in good conscience because ... black thumb. It would have been planticide, pure and simple.

it looks like a bottle stopper to me. good find. I don't know if I would want to be the object of sudden attention like that. but then, I'm not 18.

And if you're not satisfied with your lettuce and celery ... you can also use the root tips of green onions to grow your own fresh ones! We'll expect photos.

Wow! Great success with the orchid. And Mr. Chai Walla seems to have clear blue eyes which would seem a rarety in Pakistanis.

Kaki: Yeah, I prefer one over several. But we now have several. We just spread them around the house. :)

YP: I am so glad you know what that thing is! I was mystified.

Ms Moon: Maybe we'll try it with celery too!

Red: Yeah, sometimes when they look like they're dying, they're just recharging!

Sharon: Well, magical is definitely an overstatement. I just never write about the things that die!

Jenny-O: Maybe you just need some really, really low-maintenance plants. A cactus? Seriously, I think the mistake most people make is overcaring for the plant -- overwatering, over-fertilizing. You'd be fine with plants that you could just leave alone, and there are some.

Ellen: Yeah, it's exciting for him, I'm sure!

Gal: We could have a whole vegetable garden! I planted a sprouting head of garlic once to see what would happen, but it just died. :/

John: We got those in Brussels at the Midi train station. They're dogs -- salt and pepper shakers.

Catalyst: Yeah, that's a really striking feature in a Pakistani! I wonder what his genetic heritage is?

I should mention that one doesn't have to stick the root ends into a glass of water. They can be stuck directly into soil; at least, that worked for me with celery.