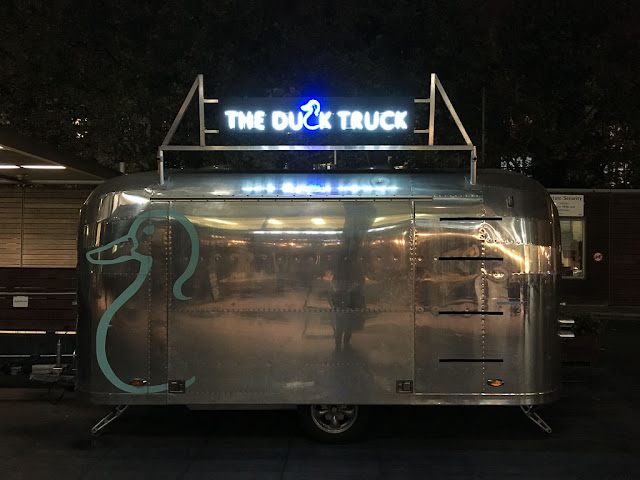 Dave and I went to Shoreditch last night for the opening of the Art Below exhibit that includes my portrait. We didn't stay long -- just enough to say hi to Martin, the artist, and a few other people we knew there. I must admit, the novelty of seeing the portrait on display is starting to wear off. I told Dave I may be officially done with it now -- if and when it gets shown again, I may let it do so without me.

I have to let it go, right? It has to grow up and make its own way in the world. Go to college, earn a living. I can't support it forever.

It was fun to wander among the artworks, though. There seemed to be a running theme of reproducing well-known or iconic figures in more modern or "edgy" environments. There was a version of "Girl with a Pearl Earring," by Vermeer, in which the girl sported Prada sunglasses. There was a version of the famous portrait of Che Guevara in which he wore a pink beret with a flower -- "Gay Chevara," it was called. And the Queen was shown in several contexts, including an x-ray image of a head wearing a crown. 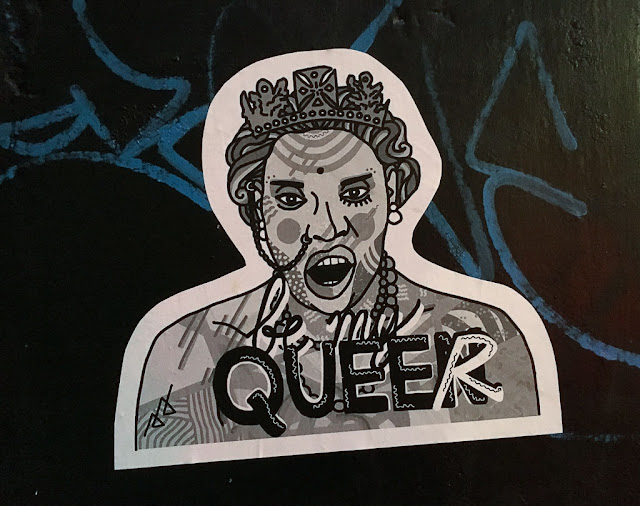 And then there was this Queen, which was not part of the show. We found her (him?) on a door on the street outside.

Otherwise, I spent the day in the library weeding books. For example, we have ancient copies of the second and fourth books of Frank Herbert's "Dune" series. But we don't have the first book, which is pretty much the main one. So I'm discarding the old ones and buying a fresh copy of the first one. If people want more in the series, we'll consider it when the situation arises. They aren't checked out often. (Some of that older generation of science fiction just doesn't seem to appeal to kids today -- Robert Heinlein, Ben Bova, Ursula K. Leguin, Arthur C. Clarke. We have them all, but they aren't frequently read. Asimov and Bradbury manage to hold their own.)

I'm also compiling a list of books we need to promote more, and hopefully we can get some of them noticed. Part of the problem -- and I know I've said this before -- is that older kids just don't seem to read books. Maybe they're too busy online. (I sound like such an old man!) We have tons of middle school kids checking out materials but when they hit ninth grade or so, those checkouts slow to a trickle.

(Top photo: The Duck Truck, in Shoreditch. We didn't eat there -- it was closed. We just liked the look of it!)
Posted by Steve Reed at 7:11 AM

I hope this finds you and yours doing well. May we display your header on our new site directory? As it is now, the site title (linked back to its home page) is listed, and we think displaying the header will attract more attention. In any event, we hope you will come by and see what is going on at SiteHoundSniffs.com.

I think that a big reason older children stop reading for pleasure is that they are overwhelmed by the various examination courses they have to take. All that homework, all those deadlines and projects - so that language and reading start to seem like functional vehicles. Even English Literature courses are about dissection and proving arguments - not responses that any great writer anticipates when crafting Literature.

Could you do a monthly display like they do at the libraries here? Declare a "Science Fiction" month where you put out some of the old masters with maybe a rocket ship and...oh, it sounds so corny. But do you know what I mean? Themes with representative books set out which may be checked out.
I love that your portrait is still getting attention. Steve- that's just cool.

I see the Jerry E Beuterbaugh comment. I did not bite as it looked like a scam.

If you would care to google SiteHoundSniffs.com, my dear Red, you would see that it is not at all a scam. Besides, in what way could I be trying to hook anyone into anything by manually listing sites instead of using a webcrawling bot like Google and merely asking for permission to display the header to make the listed site more attractive to those looking for something interesting?

I used to love science fiction when I was young but, I don't enjoy it as much today. In fact I bought a book by Ben Bova and couldn't finish it. Somehow the stories lost their appeal and I'm not sure why.

It's around ninth grade when kids begin to really get a life apart from their families ... so I'd venture that as one guess why they may stop reading. I never did get a social life until university, because I lived in the country, had no transportation, and was pretty shy. Reading was still a big part of my life. I can't remember reading ANYTHING other than course material in university, though :)

I meant to mention that I've thought exactly the same thing about "Mr. Orange". Those chemicals can't be good for you.

The Duck Truck. Hmmm. I like the logo.
Gay Chevara - very droll.

And listen Steve, (she says in that terrible, flat, whining tone many Australian women use) could you pleeeeze set up your blog so I don't have to open a new page to check content and spelling when I want to make an erudite comment.

Thank you in anticipation (that wonderful, old-fashioned close to business letters in the days of yore).

And then there is the Jerry and Red exchange....

Sorry, I'm having one of those days when I don't know when to shut up.
:-)

I got the Jerry comment too and sent it to spam. It might not be a scam, but if Jerry wants customers his tone with Red could be a little less arch.

As for high school kids reading, between schoolwork, social life and social media they don't have time. Also when they do start reading again I notice they read more on their hand held devices like kindle than they do actual physical books.

Jerry: By all means, feel free to list my site, as long as it involves no expense to me! (I'm not sure what you mean by displaying the "header" but I'm sure it's fine!) I think you can understand how some people may view your offer as spam, given that we (or at least I) haven't seen you comment here before and we just don't know anything about you. I'm sure no one meant any offense. We're merely being Internet cautious. :)

YP: I think you're exactly right. Kids are under tremendous pressure to perform well both academically and extra-curricularly (is that a word?) and it leaves them very little leisure time. Which is sad. It's also due to more social life, as Jenny-O points out.

Ms Moon: We do displays like that sometimes. I'm not sure I've ever done it with Sci-Fi but we certainly could!

Red: Yes, thinking outside the box is a good thing!

Sharon: Older sci-fi can be a challenge, for sure. So much of our scientific worldview has changed since it was written. It requires tremendous suspension of belief! I've never been much of a Ben Bova fan.

Alphie Soup: I would set up my blog differently if I knew how to! Should I embed a dictionary in the sidebar? :)

37P: Dave and I were talking about e-books yesterday. It's been my experience that they haven't taken off as well as was once expected. People seem to still want paper books, even young people. I think e-book readers will be a minority for the forseeable future!

Thank you so very much for coming to my rescue. Thank you also for giving permission. You can see your linked header under All, Daily Life, Photography and the United Kingdom. If you could say something (preferably good) about SiteHoundSniffs.com here and there, I would greatly appreciate it.

P.S.: Oh, but I have left a comment here and over on their sites before, Of course, it has been a while since, but one could simply google for the site when checking if it may be a scam or not, Most just ignore me, and I do not pursue it because my efforts are meant to be more for the benefit of others than myself. By the way, one of my best friends was Steve Reed. He wound up stealing my first wife away from me. That is not you (now with a shaven head and living across the pond) is it? (LOL?)

Hi Jerry -- LOL, that definitely wasn't me! I'm about as likely to steal your wife as you are to steal my husband! :)