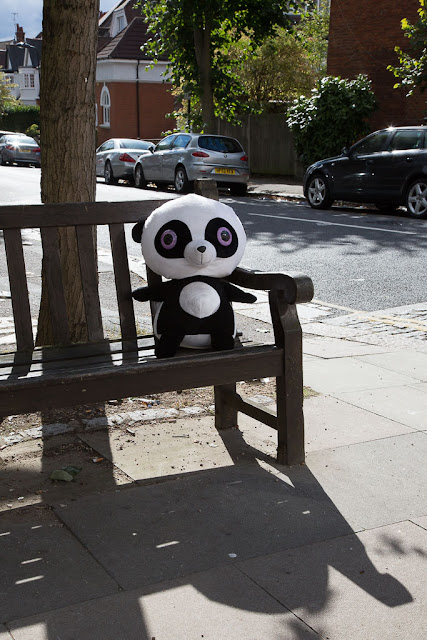 I learned something really interesting yesterday. Apparently Bernie Sanders's brother lives in England, and is running for Parliament as the Green Party candidate from the Oxfordshire district most recently represented by David Cameron. (Now that Cameron's stepped down, they need someone else.)

Apparently Bernie recently endorsed his brother. Which made me wonder if the "Feel the Bern" message I found on the tree in Hampstead Heath, and posted yesterday, is actually connected to this election, rather than the U.S. presidential race?

We may never know. I asked the possessed panda in the picture above, abandoned on a park bench on my street, but he remained mute on the subject. Maybe I should have asked him in French. Or Chinese.

Speaking of French, yesterday I was practicing on Duolingo and I got caught in some kind of weird alternate reality where every sentence I was given to translate sounded just a little bit dirty:

"You want to see my vegetables."

"We want to taste the meat."

Is it just me?

But anyway, back to politics -- The New Yorker recently featured an article about Trump voters in West Virginia, and what's motivating them. I found it refreshing, because the voters who were quoted were articulate and thoughtful. They're still wrong, at least from my perspective, but I could appreciate their reasons for wanting Trump. One man, a history professor, said he admired Teddy Roosevelt and thought Trump brought a modern version of Roosevelt's bluster and grand vision to the race. I can respect that while disagreeing with him. He's not just waving a flag and chanting a tired Fox News headline or a racist epithet.

I've been feeling a sense of inner calm about politics lately. For one thing, I've voted, so my role is finished. (And admittedly, it helps that my candidate appears to be ahead.) Even Brexit seems more inevitable now, more a matter of incremental coping. All the arguing, the Facebooking, doesn't really contribute much, does it? All we can do is our conscientious best. And I've done it. Now it's just a matter of being open to the result.
Posted by Steve Reed at 6:51 AM

Were you practicing your French within earshot of the panda? It looks slightly alarmed.
And it also looks very clean.

I am however looking at it from thousands of miles away and maybe close up it is not so clean.

In answer to your question about the French practice, yes it is is just you you dirty, dirty boy!

I am using Duolingo to learn French too and I've experienced some potentially dirty sentences. Those are the ones I take a screen shot of and try to remember.

I saw the Bernie Saunders endorsement by his brother, but I hadn't realised he lived in the UK. Or maybe he's just a temporary resident until after the Whitney by-election :)

As for your election, I'm with Jay Leno: "If God had wanted us to vote, he would have given us candidates."

I think people are becoming weary of the tone of this election. Hillary is trying to talk policy but Trump just wants to roll around in the gutter and she is forced to respond. and the tinfoil hat crazies are out claiming that Obama is trying to start a war with Russia so he can declare martial law and thereby postpone the election so he can remain president.

It does seem that some Duolingo employee must have been snickering as he/she made up those practice sentences :)

Well, you've solved the Bern mystery. I think your other problem is fast running out of gas. However I think Trump's loss will create some nasty problems.

I love the Panda Oracle - but maybe it should be holding a Magic 8 Ball. And yes, those phrases would have made me head straight to the gutter too. Where apparently I would find DJT rolling around. Sigh.

I just finished reading that New Yorker article you mentioned and unfortunately it didn't have the same effect on me. Maybe that's because I'm still in the middle of this election horror. I can't wait for my ballot to arrive in the mail so I can send it off. Maybe I'll feel better then.
Yes, those phrases are suspect. My mind went in the same direction.
I had no idea that Bernie had a brother in England let alone, one running for office. However, if that tree paint had something to do with his candidacy it seems a bit blasphemous given he's from the "Green" party.
I love Panda Oracle however he does look a bit stunned. Perhaps he's been watching too many political ads.

Strange that the panda would be abandoned like that. He looks quite new.

Alphie: Yeah, not so clean.

YP: What can I say? My mind went there right away.

Shooting: Jay has it mostly right, but I still don't see why Hillary isn't a viable candidate for many people.

Ms Moon: I missed my opportunity for a great transition there, linking those phrases to Trump! Damn!

Ellen: Yeah, everyone has election fatigue and no one wants to hear about Paula Jones again. I hadn't heard that conspiracy theory about Obama. Funny! The stuff people come up with...

Jenny-O: Exactly! I was like, "Is this for real? Are they playing a joke on me?"

Red: I may be calmer, but I won't rest easy until after election day!

Bug: A Magic 8 Ball would have helped. "Ask again later."

Sharon: Yeah, not very green to paint a tree! I don't know why the New Yorker article helped for me. I guess it dispelled my suspicion that Trump voters don't know what they're doing. I can respect someone who really thinks about the race and makes a decision other than mine, as long as they're THINKING.

Catalyst: He was in pretty good shape, but he's a little creepy. Those eyes! I imagine he was giving some kid nightmares.