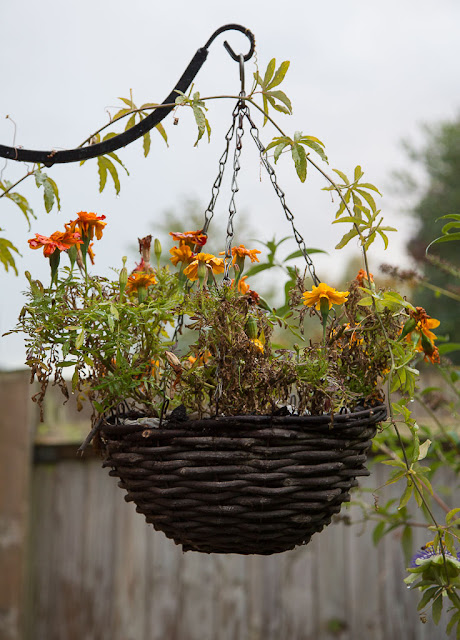 More evidence of our autumnal garden. I discarded our yellowed tomato plant -- after a final harvest of six pinkish tomatoes, which I hope will become red on the windowsill -- and a few other flowers past their peak. These marigolds are still hanging around, but probably not for long. Dave has set his sights on them.

I did repot the foundling fig tree in its new home, and I cut it way, way back. It's now pretty much a stump, about 18 inches high, with two side shoots. I tried to envision the shape of the future tree and work with that. I don't want to show it to you, though, because it looks fairly awful. If it survives I'll post a picture of it when it begins greening out again.

Also, I found an orchid on someone's trash pile while walking Olga yesterday. It's not in great shape -- it looks like it got knocked over, maybe, and it's loose in its pot -- but I'm hoping it will come around. We now have three orchids, two of them rescues. I'm becoming a plant hoarder!
Posted by Steve Reed at 6:57 AM

A vision of things to come...Retired library worker spends his days poring over rubbish dumps and bringing "rescued" items home in a rusty old pram. How the neighbours sneer as he trudges along in his patched "Oxfam" overcoat followed by his faithful hound...but his garden in West Hampstead is a botanical jewel in the urban jungle. Verdant with aromatic herbs and blossoms visited by hummingbirds and multi-coloured tropical butterflies.

Once again, I could not have said it better than Mr. Pudding. Well, except for the part about the neighbors sneering. Or the patched Oxfam overcoat.
I can think of few things sweeter than being a plant rescuer!

I think that's great, I hope it comes back along with the fig tree.

that's plant rescuer if you don't mind. we had a neighbor in the city, an elderly man who was sliding into dementia. he would get on his bike with it's big basket and rummage through peoples trash and junk and bring stuff back. when he died, the family had to clean out the garage which was filled with junk and crap.

I think I'd call you a "plant doctor"!

I, too, would go with "plant rescuer" or "plant doctor"! Had to laugh at YP's description, though :)

You are not a plant hoarder, you are an horticultural first responder. As for marigolds, they have never been my favourite flower, in fact I have quite an irrational hatred of them. (I know, I must be a very bad person, what can I say?) Anyway, to the point. My late FIL loved (nay, worshipped) marigolds, and he was always giving me plants for my garden. I always managed to pass them out to other marigold lovers, and didn't think anything more of it. Then came the day when I arrived home from work to find my garden awash with a veritable sea of marigolds, a crowd, a host of bloody orange marigolds. (Apologies to Mr Wordsworth) And there stood FIL, with a triumphant smirk on his face. 'I saw you were having problems with raising my plants' he said, 'So I thought I'd give you a helping hand' And with that he swirled his cape and disappeared in a cloud of smoke. Well, he might as well have done. When he died I gradually got rid of the orange menace, and have been happy with my garden ever since. Then this summer, exactly 10 years to the day since he died, my garden suddenly bloomed all orange again. Spooky! Turned out they were dandelions, but it just goes to show, doesn't it?

You may become the Henry David Thoreau of London!

YP: Sounds good to me! I'd say that's a pretty accurate depiction of the future, actually. Except Dave gets a lot of the credit for the botanical jewel.

Ellen: You're right -- plant rescuer is much better! I hope I don't become that much of a hoarder. It's hard to see good stuff go to waste, though.

Lesley: Wow, your FIL was quite insistent that you grow his particular variety of flowers, wasn't he? I like marigolds, actually. They were the only annual I ever remember my mother planting at our house in Florida. When I went to India they were everywhere, in garlands worn by people at religious festivals and ceremonies, that kind of thing.

Red: I hope so. Time will tell!

Catalyst: That wouldn't be so bad, would it? I've already lived longer than ol' HDT, though. I'm a late-blooming HDT. :)