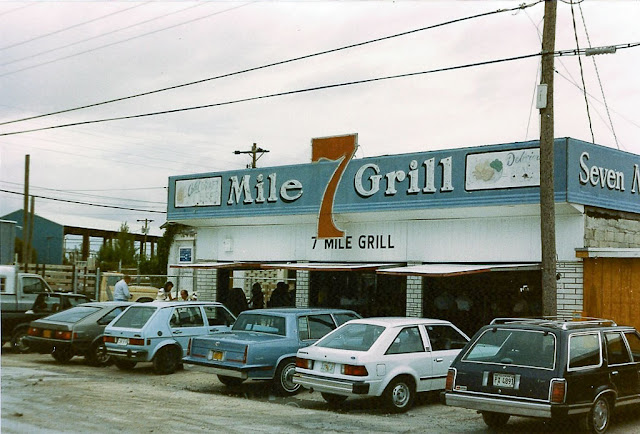 When I was growing up, my family subscribed to National Geographic magazine. Every month the familiar gold borders of the cover brightened up our coffee table and invited perusal of the photos within. (Occasionally the articles, but mostly the photos -- it's long been a photographer's magazine.)

In December 1984, when I was a freshman in college, the magazine published a photo essay by Bruce Dale about U.S. 1. Dale followed the length of the highway, from Maine to Key West, and photographed the people and places he encountered along the way.

Being a Floridian, I was immediately drawn to what he had to say about the Florida portion of his adventure. He photographed the famed iguana man of Key West and the Seven Mile Bridge, part of the so-called Overseas Highway that traverses the turquoise waters of the Florida Keys.

"Island hopping south from Key Largo to Key West, Route 1 begins its countdown," he wrote. "At mile marker 50, Seven Mile Bridge seems to head off into the open sea. Completed in 1982, it replaced a much narrower one, originally the old Flagler railroad bridge. Before hitting the north end of the bridge, I always fortified myself with a piece of Key lime pie from the Seven Mile Grill."

(I have this quote because I recently found a copy of the magazine in a dusty cabinet in our school library. Memories!)

The article launched my infatuation with the Seven Mile Grill, and also launched my plan to go to Key West for Spring Break that following year. My roommate and I made the trip, in March 1985, driving the Overseas Highway in my light blue, tank-heavy 1977 Pontiac Sunbird. We too stopped at the grill, in Marathon, for key lime pie. Kind of star-struck ("This place was in National Geographic!") I took a picture, above. 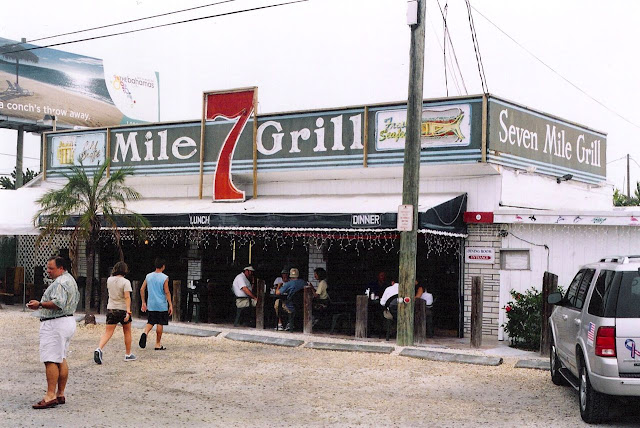 Over the years, I went there several more times, with multiple friends. We always sat at the bar and ate fried things and, of course, pie. In 2005, after I'd moved to New York and twenty years after my first visit, I photographed it again when I stopped with my friend Arne on our drive from Miami Beach to Key West. It hadn't changed much -- maybe it was a tad more attractive.

And unfortunately, that's the last time I've been able to go to the Seven Mile Grill, but only because I haven't driven the Overseas Highway since. The grill still exists today, as this Google Street View shot from 2015 demonstrates: 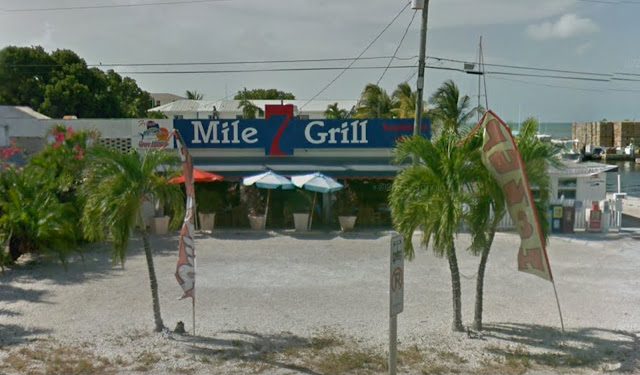 One of these days, I'll get back there.

I was moved to think about the ol' grill because my beloved souvenir t-shirt, which I bought on my visit with Arne, is on its last legs. I've worn it often for 11 years, and it's finally so thin, so stretched and so perforated with holes that it's only a matter of time before I have to throw it away. 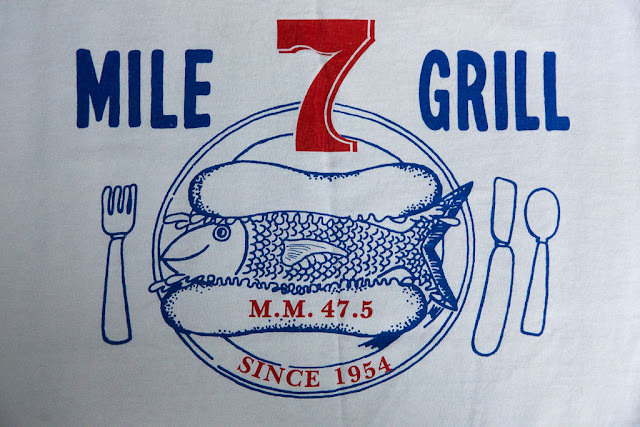 Isn't it a great shirt? I once had a guy stop me on the street in New York and ask me where I'd gotten it.

"Oh, you mean it's a real place?" he said, his eyes wide. I guess he thought I'd picked it up at Urban Outfitters or something.