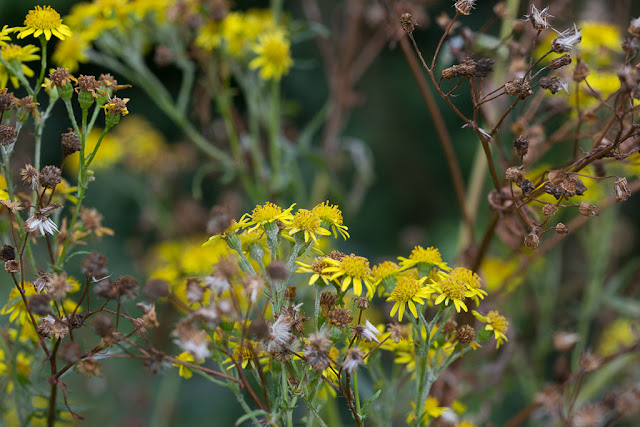 I finally cut down our ragwort last night. I took these pictures on Sept. 24, when it was already looking brown and autumnal, but it had become even browner since then. There weren't many flowers left. To everything (turn, turn, turn) there is a season (turn, turn, turn).

Dave and I were back at school yesterday, but there were no students -- it was a professional development day. I took a workshop on mindfulness, which was kind of fun, and then worked in the library on book weeding. (A never-ending process!)

We came home to meet with Lucy, the woman we've asked to watch Olga during our upcoming travels to Copenhagen and Florida. She's a friend of a friend at school and she seems nice and reliable. Olga took to her right away and curled up against her leg for ear-scratching. (Lucy was wearing black and I winced, thinking of all those little white Olga hairs getting on her clothes, but like any good dog-sitter she apparently didn't give it a second thought.)

Then I raced down to West Kensington to meet a friend and his wife for dinner -- a guy named Chuck I used to practice Zen with in New York. We attended the same Zendo but I haven't seen him since I moved. In fact, I'm pretty sure he's the first person from the Zendo I've seen since Dave and I came to London five years ago. It's funny how I mothballed that aspect of my life after we moved, partly for lack of a place to practice but also out of ambivalence. I recognize the value of stopping, of letting the world happen around us and stepping back -- but as I've written before, I struggled with spending time on a cushion when I could be out in the sun or on the street or in the park. As long as I'm remaining somewhat mindful, it's better to be engaged, isn't it? Engaged and distracted don't have to be the same things, do they? 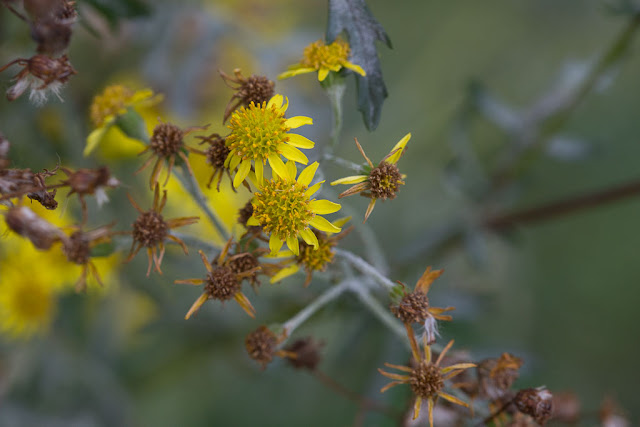 Anyway, dinner was fun, and I was glad to get an update on the life of the Zendo and its participants. I was also glad to get home last night and collapse into bed.

Oh, I never mentioned it, but my new passport arrived last week -- with a rather dreary-looking picture (you aren't supposed to smile anymore) and lots of nice empty pages ready to fill with stamps! So I am all set for Copenhagen at Thanksgiving.
Posted by Steve Reed at 6:25 AM

When weeding books in the library did you come across one called "Ragwort" by a fellow named Reed - all about a manservant who lived in a mansion near Witney in Oxfordshire and one night turned into a banana?

It looks to me like the ragwort was indeed ready to be pulled. But I know- it can be hard.
Wow! You're life is so busy right now! And that is good, I think. And yes, I do believe you can be mindful anywhere. That's the theory, at least.

I always wondered about those people who spend so much time meditating and not, as you say, engaging the world. we are here, we incarnate to experience this reality so why spend so much time trying not to experience it? mindfulness doesn't mean spending your life sitting quietly trying not to be part of the world. mindfulness is being fully engaged in whatever you are doing. at least that's what I think.

Poisonous to everything ragwort..especially horses!

I don't know much about Zen but your description - to stop and let the world flow on around you - makes me wonder: what if everyone was Zenning at the same time? Things would grind to a halt! All of which is to say, I think we can be mindful in any task that is solitary, that does not require our full concentration (i.e., not air traffic control, for instance), and that allows us to let our minds go at a slower pace. My two cents :)

I need you to weed out our bookshelves. Ah, the crap we've got there. It feels like sacrilege to throw books out, but it's hard to find a place to donate them and so I really need to develop a backbone and just do it.

I always liked PD days. There was usually something useful to learn. Since you'e always weeding out books , you must have a big budget to buy books.

You guys are real travelers. I commend you.

At last! I have an ally in the politics of ragwort.....

Sit on a cushion or sit in the sun. As long as you're mindful, the setting doesn't matter, or at least that's how i think of it.