I'm Famous in the Tube 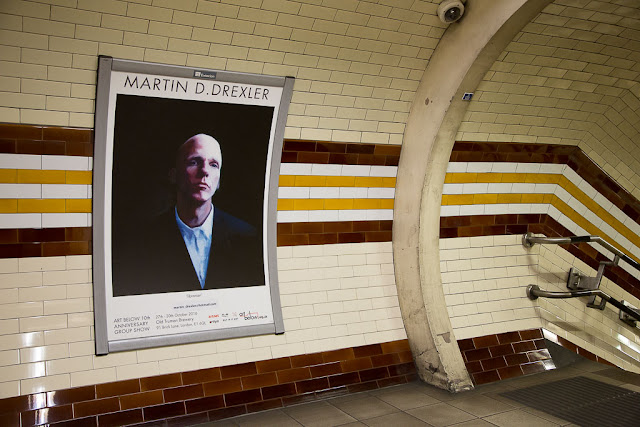 Remember the portraits my pal and coworker Martin painted of me, beginning about two years ago? There's one of my face and shoulders and another of most of my upper body. You may remember the latter was exhibited in a museum show last September.

Well, now the former is going to be part of a gallery show in East London at the end of the month. A poster has gone up in the Regent's Park tube station advertising the show -- with my face on it!

Surreal. I never imagined I would be exhibited in the tube. Life takes some strange turns sometimes.

Dave and I went to see the poster last night. We had to make a special trip and I wasn't able to get there earlier -- with all our recent traveling and whatnot -- although I think it's been up about a week. It's supposed to remain on view all month but I wanted to be sure to see it before it got graffitied or otherwise damaged -- which is always possible in the tube! 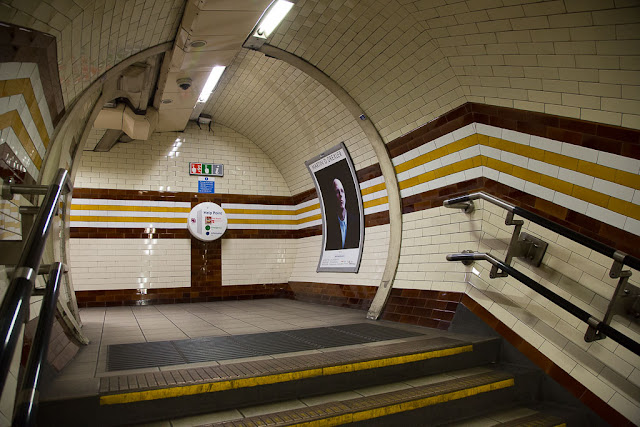 So, yeah, that's one of the stranger things to ever happen to me.

In other news, yesterday while walking Olga I found nine wood and/or metal picture frames piled in a trash bin. They were in perfect condition -- in fact, some hadn't been used -- with intact glass and no visible damage. So I took them out of the bin, stacked them in my arms and continued, rather precariously, walking the dog. Let me tell you, nine picture frames can get heavy. But eventually I got them home, and I put them in a tote bag and took them to work, where I set them out on a table in the staff lounge with a "free" sign. They were gone in no time. Woo hoo! Victory over the landfill!

The problem with industrial production, especially overseas where costs are cheap, is that it makes items too inexpensive. People consider everything disposable. Realistically, things should cost more, which would encourage us to value and conserve them -- and reflect a more accurate cost of our impact on the planet.

I haven't heard much more from my relatives regarding the hurricane. My mom confirmed that she and my brother's family reached their evacuation destination out of state. The storm apparently weakened by the time it was off Jacksonville, and the local paper says it was "not the catastrophic event the region feared in recent days," but there was some damage. So we'll see.
Posted by Steve Reed at 8:11 AM

well, if some stranger walks up to you and asks if you are the librarian, you'll know why. and good for you for rescuing those frames. our throw away culture has always been one of my pet peeves.

Oh my gosh, now I'm wishing I had visited this tube station. I'm sure seeing that poster would have stopped me in my tracks.

Glad you hear your family is safe from the storm. I'm hoping any damage isn't to severe.

What a cool and amazing thing! I just love that portrait in the tube.
"Librarian."
Who would have predicted this?

St. Augustine sure did get the hell beat out of them. I suppose I should check the weather and see if that storm is going to loop back. And then, there's the other one sitting out there- Nichole.
Lord.

Wow for the picture!

I watched footage from the storm surge on Jacksonville beach earlier today and it is hard to watch now that you've mentioned that your mother lives near there. Strange but true.

How cool is that! An excellent likeness, by the way.

Yay for saving the landfill ... Your points are excellent, and I believe that higher prices would also discourage over-buying in the first place. Whenever I am considering buying an item, I try to think about what I will do with it when it is no longer useful or wanted. It has saved me a purchase many times.

Now your problem with cheap products comes from globalization and competition in the marketplace. I also think that people have so very little money that they buy the cheap trash.

HEY IT'S COOL THAT YOUR PICTURE IS IN THE TUBE!

How very cool, you are famous! I love that painting, you can read many things into your facial expression. It must be strange to come upon oneself on the wall of the Tube station! You should have your photo taken next to it, yes? Yes!

Ellen: I just can't stand waste. Especially of items that hadn't even been used! Makes me nuts.

Ms Moon: The "librarian" title alone I could never have predicted. Who knew I would ever work as a librarian?!

Sabine: Funny how a human connection makes a situation like that seem more real!

STL: Thanks! Martin really gets the credit. :)

Jenny-O: It's the same situation with gasoline. The TRUE cost -- when we think about impact on the planet and that kind of thing -- isn't reflected in the price. People have no incentive to save when everything is so inexpensive. As my mom would say, "It's all going to come to a grinding halt!"

Red: Well, it's true that inexpensive is good when you don't have much money -- but I also think most of us buy stuff we don't really need. We'd all have more money if we didn't waste it on junk that we then throw in bins because it was so cheap in the first place!

Lynne: Actually, I did take a picture next to it. I put it on Facebook but I didn't post it here, because I hate blogging pictures of myself. :)

Steve! I want that poster! You should also get one and frame it! You just look so cool.