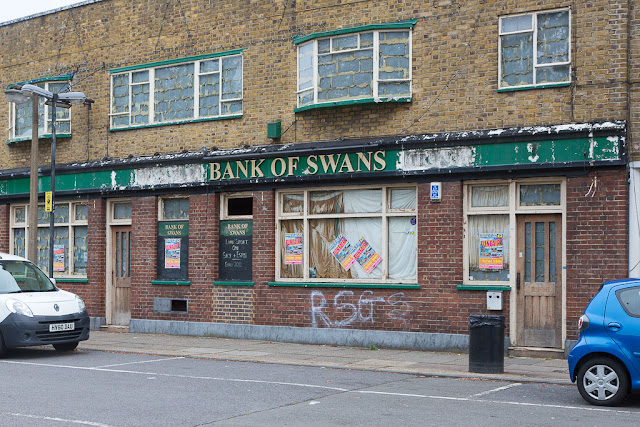 This may be one of the saddest looking vacant pubs I've seen in a while. It's in Clapham, and apparently closed several years ago. A sign out front advertises "Live sport on Sky and ESPN," including "Euro 2012" -- so that gives us some sense of the timetable.

"One of Clapham's more downscale pubs," reads a 2008 review on Yelp. "A bit like a coal miners or working mens club. The Bank of Swans attracts punters from the Clapham Park Estate, so I'm not going to lie to you, it can get a bit rough in here."

Still, the reviewer goes on to say, they had decent beers and snacks, "so it's not all doom and gloom." 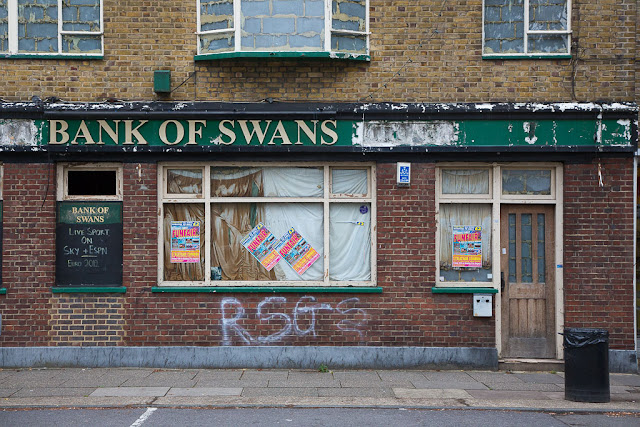 Apparently there's a plan to demolish the pub and adjacent shops, but it's been delayed. So for now, the Bank of Swans stands derelict.

One of our local newspapers has been running a campaign to save local pubs, many of which are under pressure from a variety of financial and social trends. Skyrocketing real estate values have led some landlords to sell off pubs for housing. And in 2015, Britain's beer drinkers, for the first time, bought more of their beer in a supermarket or shop than in a pub or restaurant.

It's sad. Pubs, to me, are an element of what makes Britain. I hate to see that culture erode, though honestly, drinking less probably isn't a bad thing for anybody.

Dave and I joined some coworkers in a pub just last night, actually, near work. We're now on October break and don't go back to school until next Wednesday. We're off to Oxford tomorrow.

As planned, I spent yesterday cleaning off our library bookshelves. We have about one-third as much Tom Clancy as we did before. (I kept the books that were really written by Clancy, but got rid of the ones he merely lent his name to -- "Tom Clancy's Op Center" and stuff like that. It's amazing how many of those we had, and they were rarely used.) I also pulled any book that we'd had for five years or more that had never been checked out. We'll either promote those or consider getting rid of them. It's amazing how quickly "shelf clutter" accumulates!
Posted by Steve Reed at 7:31 AM