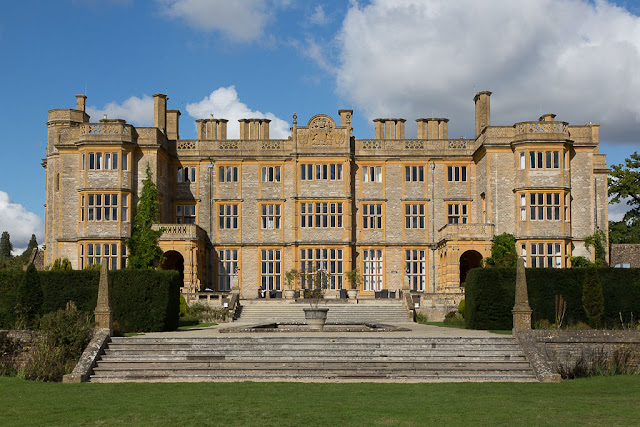 Not too shabby, right?!

I was prepared for anything, but this place is a gem. We took the train up from London yesterday -- an hour-long trip -- and hopped in a cab at Oxford for the quick drive out to Witney, where our hotel, Eynsham Hall, is located. 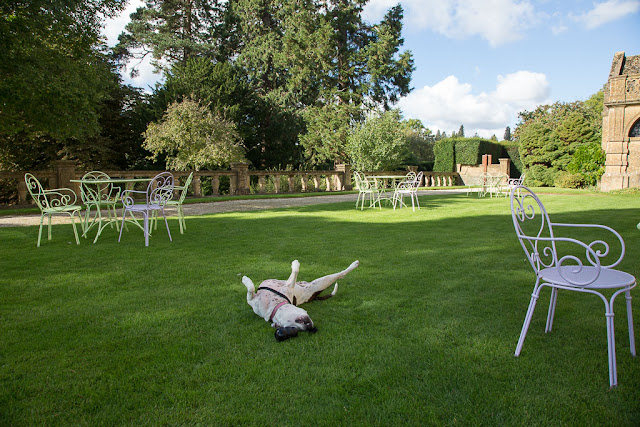 Olga just can't believe her good fortune, and neither can we. We checked in, had a pint at a table on the lawn, and threw Olga's Kong for a while. She loves the wide open grassy fields, were we've already seen pheasants wandering, and I can't wait to get out and walk a bit today. 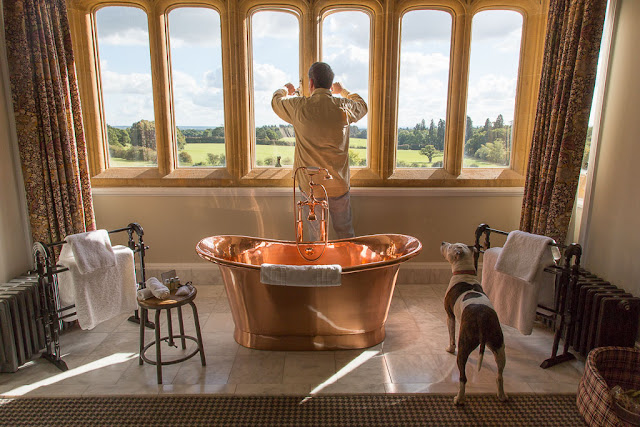 And our room! We're in the main house -- the dog didn't cause us to be banished to the hinterlands -- and in fact we're pretty much smack dab in the middle of the building on the third floor. In that top photo, our windows are just below the central medallion on the roof.

We have a very shiny copper bathtub in our room. We haven't used it. I'm afraid to, it's so clean -- though I think we could, if we wanted. (We also have a standard shower in our bathroom.) 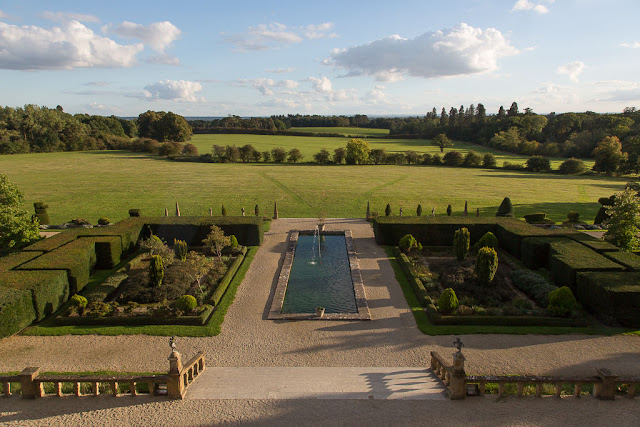 This is our view. In late afternoon, the sun casts a golden light over the landscape. I'm so glad the weather is cooperating.

There's a wedding in the building, too, so last night there was some thumpy music coming from the first floor -- but it didn't bother us too much. We went right to sleep. 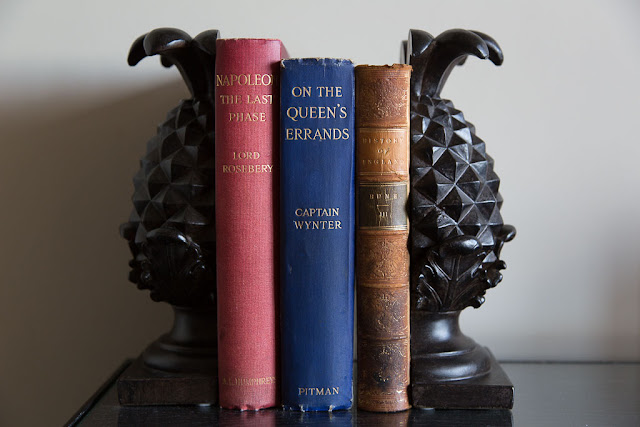 Our room is decorated with peculiar old books. Most of them are things I would never want to read, but I've been skimming "Perfume from Provence," by Lady Fortescue, from 1932. She recounts her adventures "enlarging the little golden house we had bought" in southern France, "before the £ collapsed."

"I had grown to love these excitable emotional men of the South and to regard them as my children -- for they were little more," she writes of her builders. "They were perfectly maddening, entirely without initiative, and quite irresponsible, but they were most lovable. And I wonder what woman could resist the unconscious way an Italian peasant makes love to her with his eyes while he is taking her orders?"

The narrative fits the mood of this place, which was probably inhabited by its own Lady Fortescues back in the day.

This morning I woke before dawn to find the sky filled with stars, which I haven't seen in quite a while. I took Olga out for a walk in the misty fields. After a brief off-leash experiment, when she shot off into the darkness after some nameless creature -- I could hear it running, so it must have been a large nameless creature -- I kept her tethered.

*This phrase is written in neon above the fireplace in the main lobby. It comes from a painting by Nicolas Poussin and was used by Evelyn Waugh as the title of the first part of Brideshead Revisited. It literally means, "In Arcadia I Am," with Arcadia being a pastoral paradise.
Posted by Steve Reed at 6:47 AM

Is a peasant like me allowed to leave a comment on Lord Reed's illustrious blog? Lord? More like The Duke of West Hampstead or Earl Witney. I wonder if his lordship did get round to a good soak in the copper bath with Head Butler Old David dousing his back with jugs of warm lavender water.

ERROR> "grassy fields, were we've already...". Don't worry your lordship - none of us are perfect.

YP is a bit picky sometimes. Perhaps in a former lifetime he was known as Lady Fortescue.
What say you, good Pud?
Anyway, lovely place! Geez! It's like a dream of an English dream. Don't you love it when your expectations are so wildly exceeded by reality? Keep these posts coming if you can!

fabulously beautiful! Enjoy your down time.

Staying in this place will be one of those times you always remember. Now with steps that wide they must have been expecting very large crowds! Now with that many chimneys it must get very warm in there!!!

It is wonderful that such a beautiful country house is repurposed into a hotel. More people can enjoy it and the peaceful surroundings.
I would just love to relax and read there.
Enjoy every minute.

Lords of the Manor indeed! What a lovely place, and your room ... well, I'd be in that copper top with bubbles up to my neck if I was there. After all, isn't that what servants are for Lord Steve, cleaning ye ole copper tub after the Lord bathes?

Have a splendid time! Looking forward to more pics!

Stunning. What a lovely place to visit, and it allows dogs no less. Makes it even nicer.

And please tell me you used that tub...that would be too far removed from my daily life to pass up!

wow! the view from your room looks like an old fashioned postcard.

Oh my goodness, that is so beautiful! I'm so glad Olga can be there, too - that surprises me and delights me in equal parts.

You won't want to go home!

Wow! How did you score this?

Wow...that tub, the view and you get your dog...Great holiday!

How fortunate you are.

WOW! You've struck gold there. What an extraordinary & gorgeous place to relax. I wouldn't want to ever leave.

Wow, you've really come up in the world since leaving New Jersey, Steve. I'm not sure I'd ever leave that place. Gorgeous.