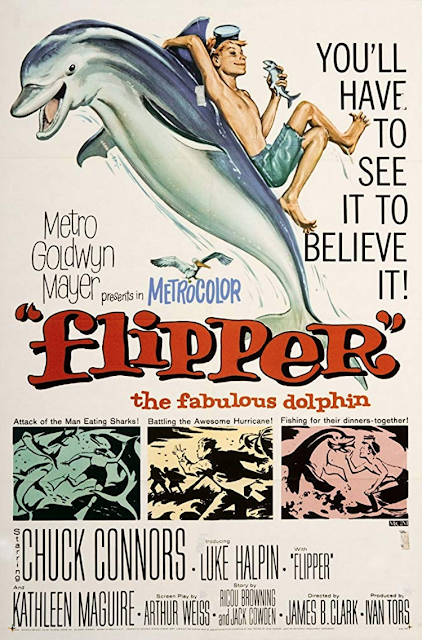 As you know, I'm a fan of old TV shows. They are comfort food to me. Maybe this is true of everyone, I don't know -- but my brother and I grew up in a fairly isolated place and television played a huge role in my daily life. Watching these shows -- many of which are much older than I am -- is like reconnecting with my childhood.

One of our channels has recently started reruns of "Perry Mason," and I've been subjecting Dave to those. It's a really good show, even now -- Dave isn't crazy about the fact that they're black and white, and he'd prefer "Law & Order," but sometimes you need a change and I've been impressed at how well "Perry Mason" has aged.

The other day we began talking about "Flipper," the show featuring a clever dolphin who always managed to save the day. That's the poster from the first "Flipper" movie, above -- from 1963. It led to another movie and a half-hour TV show that ran from 1964-67. I was born in late 1966, so I know it from reruns. My brother and I used to watch it as we ate breakfast before school around 1980. As I recall, the show would end at 7 a.m. and we had to catch the school bus at about 7:10, so it was always a challenge to see the ending of Flipper and then race out to the bus stop in time. (Thus stressing out my mom.)

It wasn't the greatest show, to be honest, but I loved it. First of all, it took place in Florida, and in those days, almost all the TV shows were set in California or the northeast. A Florida show was unusual. Porter Ricks, the adult character, was a park ranger, and he lived with his sons in a modest house with jalousie windows and a shell marl driveway, like old south Florida houses I knew. The show celebrated the Florida environment and ecology.

Ricks had two sons, Sandy and Bud. I simultaneously identified with Sandy, being the older son in my own family, and nurtured a crush on him. He was played by the handsome blond heartthrob Luke Halpin, who was actually 20 by the time the series came to an end. 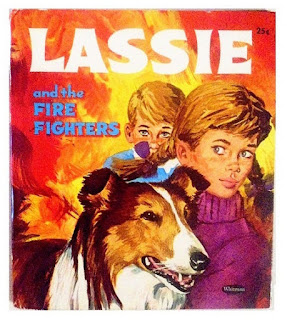 Anyway, I've showed Dave some "Flipper" episodes, and as I said, they're only OK. A little simplistic, a little sappy. "Lassie in a wetsuit," as someone wrote on YouTube.

And then there's "Lassie," a show I definitely watched in its final years on television in the early '70s. I used to have a lot of "Lassie" paraphernalia, mostly books. That's one of them at left -- I don't have it any more but the minute I saw the picture online I recognized the cover.

Something about both "Flipper" and "Lassie" makes me sad. They were good-hearted shows that now seem hopelessly old-fashioned. And I read the other day that Halpin, who's about to turn 73 (!), has had both cancer and Alzheimer's Disease in recent years, which just depresses the hell out of me.

Anyway, I'm not sure Dave understands my nostalgic attachment to "Flipper" -- or to "Gilligan's Island" or "That Girl" or "The Brady Bunch" or any of the other old shows that are so deeply ingrained in my mind. (At least he gets "Star Trek"!) Weirdly, I'm less attached to shows that were more contemporary to my childhood, like "Happy Days" or "Mork & Mindy." Something about the reruns made them special. I guess I was nostalgic even then.
Posted by Steve Reed at 7:12 AM