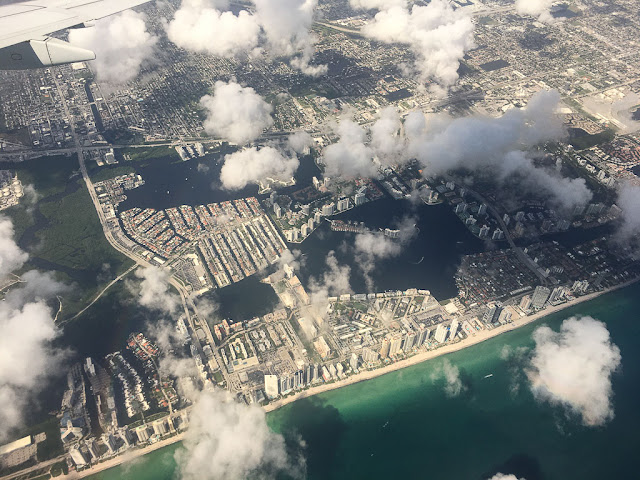 I'm now in the Miami airport on Wednesday afternoon, pre-writing some of this post so when I get to work tomorrow I won't be sitting at my desk blogging! (My boss might frown on that.) That above was the view out my window about two hours ago on the first leg of my flight, from Jacksonville to Miami. That's Sunny Isles Beach in the foreground. 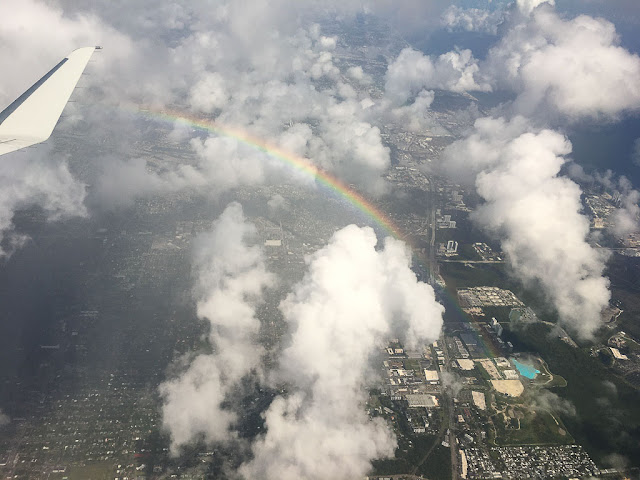 We came inland just south of there and this was the view northward, over North Miami. A rainbow!

Then we flew directly over the Trump golf club in Doral. I wasn't fast enough with the camera, but of course it has egomaniac Trump's name in towering letters on the roof, so there was no mistaking it: (That picture is from Google Maps.)

Now that I've shared those photos, let me back up a bit, before I even boarded my plane, to my mostly uneventful morning in Jacksonville. I packed my carry-on bag with my few odds and ends, and rode along as my brother took my niece to school. My brother and I stopped for coffee at a little place north of downtown, and then we proceeded to the airport. I felt like I had all the time in the world. I checked in, went to the security line, and as I was standing there preparing to pull my laptop from my bag I suddenly realized IT WAS GONE!

No, it wasn't stolen. It was under the front seat of my brother's car, where I'd hidden it so it wouldn't be stolen during our coffee stop.

I had to call him and have him drive back to the airport to hand me my computer before I could proceed to my gate -- a process that took about half an hour. And this, people, is why it always pays to get to the airport early. 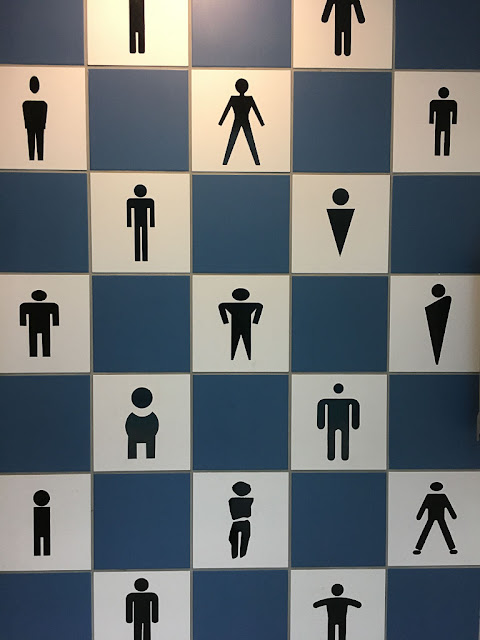 These are the tiles at the entrance to the men's room at the Jacksonville airport. I love them. I feel like I know all those people.

Here in Miami I had a media noche and Cuban cafe con leche at Cafe Versailles, in terminal E, where I often stop for Cuban fare when I pass through the airport. It's not quite Calle Ocho but it's pretty good for airport food.

And now, on to the next leg of my journey...

Now it's Thursday morning and I'm in London, sitting at my desk. My overseas flight was pretty uneventful. I spent most of it reading a biography of Zelda Fitzgerald. I also slept a surprising amount of time, two or three hours, which is more than I usually sleep on planes.

While still in Miami, I was stupid enough to once again order a glass of wine in an airport. Apparently the $26 glass of wine from 2017 didn't teach me a lesson. This time it was a comparative bargain -- only $19! When will I learn?!
Posted by Steve Reed at 9:24 AM

You may be an intellectual, well-read chap but you are also a silly billy. Fancy leaving your laptop in your brother's car! You'd forget your head if it wasn't screwed on to your neck like a bottle top. Welcome back to Merrie Olde Englande!

Have a good day. I enjoyed following your trip. Good to hear the laptop arrived back with you in time. I am always early for flights too.

When I see those first two pictures, all I can think is of how they will look after the future disaster that will inevitably happen there. I guess I just don't have the stomach to live anywhere along the Gulf coast.

$19 glass of wine. I think that is what we paid at Newark Airport a few years ago for sandwich.

I wonder who the triangle men represent at the men's room.

It's good to hear you're back in London, safe and sound. As for the wine--what the heck! Treat yo' self! Haha!

I hope you're having a good day at work, Steve.

I had the same thought as Ed about all those buildings being razed by a hurricane.

Glad you got home safely and really, $26 for a glass of wine. Wow. Glad I don't drink:)

Airport bars know they have you trapped and charge you whatever they feel like.

Glad you're home in one piece or two parts. Now to stay awake at work.

I wonder what a martini would cost at an airport bar- fifty bucks?
I, too, love the tiles! Excellent! Do you suppose that the one that looks sort of like a waffle ice-cream cone is a baby, wrapped in a blanket?
I always find the Miami airport sort of exciting. Especially if I'm flying from there to Cozumel.
Anyway, glad you're home and safe. I hope you can readjust quickly.

Glad you made it safely home! Thank goodness your brother was able to bring you your laptop! Your brother sounds like a sweetie!

So good to know you are home and back at work already. Love seeing that rainbow. Nice view. Interesting that the plane flies directly over Trump's golf resort. I wish people could throw things out the window there.
Glad that you got your laptop back in time for the flight, and that is a very cool entrance tile to the men's room.

Glad you're home. Perhaps that wine enabled you to sleep 2 or 3 hours on the plane. Given the fact that you went straight to your desk upon landing, I'd say that it was worth every penny. It's about 3:30 your time as I type this. I keep thinking, by golly, Steve is nearly done with his day! I still can't get over the fact that you did this to yourself.

Glad to hear you are back home again. That little laptop incident will get the old heart pounding. I always want to get to the airport early but my friend Julie always does things last minute. When we travel together, she always offers to pick me up on the way to the airport and I always decline saying I'll get there on my own. I would much rather be relaxed boarding the plane. I've got some wild stories I could tell about her last minute trips to the airport.
P.S. Love those photos out the window.

I thought about you this morning on my walk (I was taking a photo of a leaf!) and wondered how you were holding up at work.

What little I know about the Fitzgeralds puts me off of them. Mainly him, though. How is she presented in the biography you're reading?

Did you notice that the orange idiot's name was off-center on the rooftop? Not the the only thing off-center in the building. Should have had the letters falling over the right side of the building and melting into the ground.

Glad you made it back safe and sound--and likely, sleepy, but glad you caught a few hours of shut eye on the plane (and retrieved your laptop in time). I have the devil's own time trying to sleep on planes.

Great tiles! I look at those aerial shots and all I can is that think I could not bear to be around so many people!

I know the Cafe Versailles in terminal E. Their little pastries are too bad either. I usually get a cordadito (shot of espresso "cut" with milk). I was there just 3 weeks ago. We really should have coordinated our trips! Next time, eh?

Glad you are back. I hope you're able to make it through the work day and re-synch your internal clock.

The Zelda book sounds interesting. Pity we can't bring our own wine -- it's probably better -- and you could bring a really fabulous bottle for $19!

Leaving your laptop in the car would be a stressful situation. good that you left lots of time.

Trump, blech. I'm glad that your brother could get the laptop to you. I'm an early bird to the airport too! I see no harm in spending that much for a glass of wine if you wanted it and it helped you to relax. Perhaps it did help with the sleeping on the plane! I always get an overpriced Sbux mocha and a breakfast sandwich at the airport and consider it a well-deserved treat for myself.

At least that expensive vino helped you to sleep some on your overseas flight.

I love the first two aerial photos. What a great capture of the rainbow! I thought rainbows could only be seen from earth because the light had to be coming from behind the moisture in the air, but clearly I was wrong :)