Me and Mrs. Jones 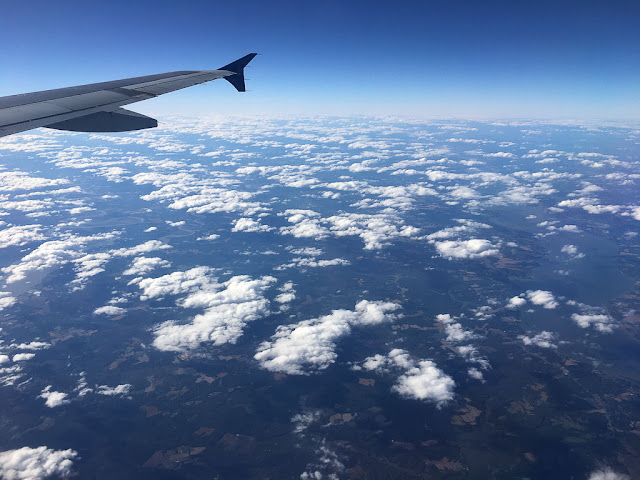 I'm in Florida now, lying in bed and listening to the hoot of an owl and the distant sound of a passing train. I'm glad to be on the ground but of course, while my inner clock thinks it's 8 a.m., it's actually 3 a.m. Florida time. Fortunately this visit will be so short that I'm hoping any jet lag quickly sorts itself out when I get back to London on Thursday morning.

I was at Heathrow yesterday well ahead of my 9:15 departure for Philadelphia. I wandered around the airport, got coffee and an almond croissant, and tried on a beautiful but overpriced shirt at Paul Smith. (I did not buy it. Aside from the insane £200-plus price tag, it was fitted, with darts in the back, and I'm not sure I have the body for that anymore!)

On the plane I finished "Black Water Rising" by Attica Locke, a mystery noir novel set in Houston that I enjoyed, and plowed through two issues of The New Yorker. I managed to not speak to anyone sitting around me, which as you know is always my goal on a plane. A young woman and man in the row in front of me kept up a long and lively conversation, though. She was going home to Kentucky after a visit to London; he was on his way to Orlando to visit Disney World. Yakkity yak yak.

"Oh, I love Florida!" she said at one point. "No matter where you are, you're just an hour from everything else!"

What kind of insane observation is that?! Tampa is more than four hours from Miami, and it would be a long day's driving to get to Tallahassee or Jacksonville from Key West. I think what she meant is that if you're in the middle of peninsular Florida, it's about an hour to either coast. Which is sort of true. 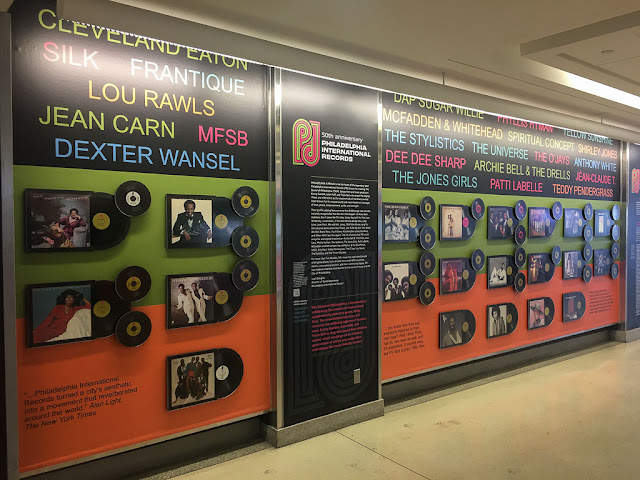 At the Philadelphia airport, where I had a 3-hour layover, there was an interesting display devoted to the Gamble & Huff music empire of the 1960s and '70s.  I love that Philadelphia soul sound -- Billy Paul, Lou Rawls, The Three Degrees -- so I spent some time looking it over.

Then I had a beer at a bar where the ordering and payment process all had to occur on my phone. Maybe for some people this is easy, especially if they have Apple Pay set up, but I haven't done that because I'm old fashioned and I like using an actual plastic credit card. I have the vague idea it's more secure than storing my banking info on my phone and transmitting it through the ether, though who knows whether that's really true.

Anyway, by the time I scanned the QR code to read the menu, made my selection, and typed my credit card info into my phone, I was thinking, "This better be a darn good beer." (It was Stella Artois and it was adequate.)

From Philly I had a window seat (yay!) and got to watch as we flew over the Chesapeake Bay and the Carolinas and over the coastal barrier islands of Georgia. Finally I arrived in Jacksonville at about 6 p.m. and sat up with the family long enough to be polite before finally going to bed just before 9 p.m.

And now I'm going to try to go back to sleep for a few more hours.
Posted by Steve Reed at 8:53 AM

I hope you got back to sleep. Jet lag usually hits me on my second day (because I’m usually so tired the first day that I sleep no matter what). As for anywhere in Florida being an hour from anywhere else in Florida, I think you may be giving the young woman more credit than she deserves.

I hope you waved to Jennifer and Bob as you flew over the Carolinas. Did you see George and Poppy taking leaks in Jennifer and Gregg's yard (English: garden)?

How boring I thought. A plane trip report. It turned out to be quite interesting. If only I had the same writer skills.

I'm like you, though if I'd had to order on the phone and pay via phone I would have searched out another place for a beer.

I too am visiting my mom in Florida (in November). Was there any mask-wearing on the planes? I have just gotten the latest Covid booster; need a flu shot and then I swear to god that is it for a while. Enjoy your trip!

I will bet the woman was trying to say that you are never an hour away from some big attraction.

Glad to got to Florida safely. Enjoy your visit.

You more or less flew over my house, but I missed your wave. I'm glad the trip was calm. I do wonder about the lady thinking in Florida she's always an hour from everything. It depends what you consider everything I suppose.

It cracks me up every time someone from another country who visits us in Palm Beach County. They think Orlando and Disney are a short car ride away. More like 4 hours or so. LOL

It's good to know that you arrived in Florida and that all went well. I'm looking forward to your Florida stories and photos.

Glad you arrived safely. The last time I flew somewhere, I was at the airport early and stopped for a glass of wine. I ran into the same automated order/pay device. I had a heck of a time getting it to accept my card so I finally just left. I noticed other people having the same problem and no one around to help. Crazy.

It's ceased to amaze me how ignorant many folks are about geography.

Stella is okay, but I always feel a little cheated they aren't the typical 12oz. bottle.

sitting here with the rain from Julia (no wind - yay!) pouring down on us while reading your post-trip post. When I had a recent layover in Houston, I had to use my credit card to pay for a $3 bottle of water. No vendors accept cash and I don't have a debit card or Google pay. There was no human cashier around, just a sort of watch clerk to keep someone from walking off without paying. I suppose I will a debit card at some point. or maybe I should skip that and go straight to paying with my phone or fitbit. Looking forward to photos from Florida!

Catching up on your blog (apparently I missed FIVE DAYS? What the heck!). I loved all the leaves! And I'm glad you made it safely to Florida! I hope you have a great time.

I guess someday in the future, I will not be able to buy things because I am not putting credit card info on my phone, EVER. Security on phones is not great.
Glad you made it to Florida intact.

If I'd known you were going to fly by the Chesapeake Bay, I would've hung out on deck to wave at you (well, maybe not...I live on the western shore), but I think you were probably a bit farther south than my location by the time you actually crossed over it. You certainly had good weather for observations. :)

As for people talking on planes (usually quite loudly)---argghh! Always seems to be a pair of chatty charlies on overnight flights across the Pond. I invested in a good pair of noise-canceling headphones and either listen to music or an audio-book. Anything to block out Yakkity yak yakers.

Hope you have a good visit. Safe travels.

Good luck on your journey. I hope all goes well. That's a great display; I'd enjoy that but I wouldn't have a clue how to pay for anything on my phone! Seems like that kind of info and phones shouldn't go together.

A short trip, and to me unplanned because I didn't about any reference to it before you were headed off. I hope this isn't because your mom is failing?

Sounds like an interesting trip. Too bad that it's so short.

Have a wonderful trip.

Steve, I'm sorry I've missed reading your blog for awhile. Curious about your short visit to Florida. Not bad news, I hope.

We live in Jacksonville. The only thing an hour from us is Palatka (not very exciting) or Georgia (not Florida). lol. It seems your flight was relatively easy - I'm so glad!

I'm even more old fashioned and like using cash. I'll never have my banking info on my phone, in movies I watch people lose or steal phones all the time!
I like that music display.

Mitchell: You're right -- the second night is often harder. On this trip, for some reason, it was about the same.

YP: I looked for anything recognizable when I flew over the Carolinas but the only feature I could identify from the air was Lake Marion.

Andrew: I saw earlier that this comment was left by you but now it says "unknown" and your blog has been removed! What's going on?!

Bob: I thought about it, but all the bars in the airport seemed to use that system. At least in the area where I was sitting.

Elle: Some people wore masks, including me, because I've been so paranoid about bringing Covid to my ailing mother.

Boud: Well, that's true too. If "everything" means a barn or an orange grove, that statement might be accurate.

Dov: Everyone thinks Disney World IS Florida. They have no idea how big and varied it is.

Robin: I didn't bring my good camera -- too heavy for such a short visit. So I hope I can do justice to your photographic expectations!

Sharon: I suppose it's a way to get around staffing, but if the bars wind up giving their drinks away they may wish they had another employee on hand!

Kelly: Mine was draft, so I didn't deal with the bottle issue!

Wilma: The phone thing just seems so insecure to me. I forgot about Julia! I hope you were OK during the storm and you didn't have any damage.

Bug: Thank you! And glad you're back! LOL

Allison: Yeah, I would never put it into the phone for regular use. I did type it into the bar's web site using my phone, but it's not stored in there at least.

Mary: I always wonder how people can talk so much. Who has that much to say?! LOL

Jeanie: I think they do need an option for people who don't use Apple Pay. Seems like they're missing out on business.

Ellen: I mentioned it before but it was a while ago when I first made the reservations. Plus it's a weird time for me to travel so I can see how it was off your "blog radar." :)

Red: Well, we intend to come back in December. So there's that, at least.

Janie: So am I! Though it sounds like Ian mostly bypassed Jax.

Catalyst: No! Not bad news. Just catching up with the family for a short visit.

Jolie: Ha! Or maybe Lake City? Also not very exciting! Jacksonville itself is pretty fun, though.

River: Yeah, exactly. I never use my phone to store financial information.

Welcome back to Florida! I took a stack of New Yorkers to Roseland but I mostly read books. WHY do we get this magazine?
Anyway, I hope your visit goes well. This IS a fast one.

Hope you don't have to deal too much with hurricane after effects. I love traveling because of people watching. I rarely have a beer at the airport since carbonation is not my friend.