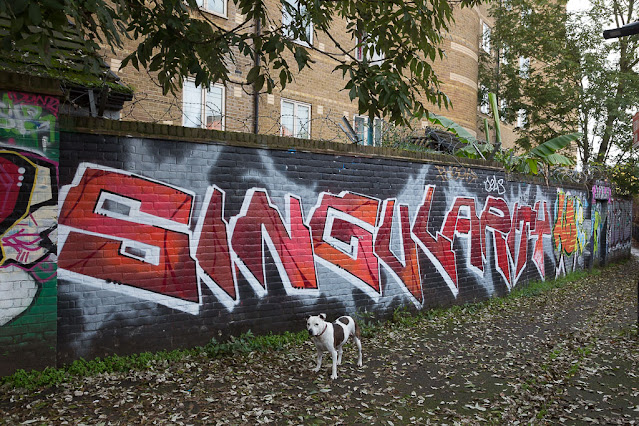 The weather is super-damp and warm: 73º F yesterday (23º C) and 85 percent humidity. There's an 88 percent chance of rain today -- in fact it's supposed to rain every day for the foreseeable future -- but yesterday was a bit brighter and I could take the dog for a walk in the morning.

We walked along Broadhurst Gardens and back along Billy Fury Way, where we found, shall we say, new levels of urban squalor among the discarded furniture and debris. (I'll spare you the photos.) Olga did come across a singularity -- at least a graffiti version -- and although I've often heard the term on Star Trek I must admit I wasn't sure what a singularity is. So I looked it up: "A condition in which gravity is so intense that space-time itself breaks down catastrophically." Another site likened it to the center of a black hole.

Hence the spacey black background for the graffiti, I guess. I wish a black hole would suck up all the trash on Billy Fury Way. It certainly looks like something has broken down catastrophically there. I thought it was just society.

Back home again, I finalized our holiday plans for Florida. I reserved a hotel in Bradenton, and although I wanted to stay at the waterfront Ramada where we've stayed in the past, they wanted to charge an astonishing $1,200 for four nights. Ummmm, I don't think so! I went across the street and found something for half the price that looks perfectly nice. (We shall see.)

I also booked us a little escape of our own between our time in Jacksonville and Bradenton. We're going to Vero Beach! I know this seems crazy, because it's not exactly on the way, but it's a part of Florida I never visit and I wanted a change from the same old scenery. I haven't been to Vero in 20+ years. We'll go to the Ocean Grill and walk the beach and decompress.

I thought about staying in the tiny town of Roseland at Ms. Moon's little retreat with the swimming pool guarded by the lions -- but alas, it was not available on the date we would be there. Another time!

Anyway, it feels good to have our plans firmed up. I'm just not going to pay attention to how much money we're spending. I'm going to stick my fingers in my ears and go la-la-la-la and drown out my own financial conscience. Isn't that the responsible thing to do?

Billy Fury would be furious if he knew what was happening to his way.

Who is Billy Fury? (yes of course I could look it up)
US$300 a night, yes very steep pricing.
Spend money while you are both fit and able. Until you retire, money will keep coming in.

I could never be a graffiti artist. It would just kill me to spend hours painting a masterpiece along 30 feet of wall only to come back a week later and see some buffoon had painted the word "singularity" over mine.

$1200 for four nights? Ouch! Seasonal rates, I suppose -- holiday and warmer climes than the north. But yikes! Still, it's good to have it wrapped up and nice you'll have some selves-time too.

Your trip back to Florida is well planned and will be fabulous- so says the fortune teller who is NOT a gypsy because they no longer exist.
The weather will be so fine for you.

Oh my goodness! You know how thrilled I am that you'll be in Vero! And I'm also thrilled that you even tried to stay at the pool house in Roseland. Do you think maybe you'll get a chance to just stop by Roseland? I mean, it would only take you about five minutes to drive around fairly thoroughly. It is directly off US 1.
And you'll be eating at the Ocean Grill. Oh my. I am inappropriately excited about all of this.

I thought singularity meant being unique or different from others but I see it has more than one meaning.
Sounds like a fun holiday trip in Florida. Maybe you and Ms. Moon will meet up! :)

$300 a night? Ramada thinks highly of itself though I supposed that's a holiday rate. Too bad Roseland wasn't available. I'd like to go there too.

Why are humans so trashy?

Good to get all the travel plans firmed up ... make the most of seeing your Mom and other family members!
I hope you two guys will be able to meet up with the Moons.

I'm glad you have your holiday travel plans all set up. I love that you and Dave are going to spend some time at the beach just for fun and relaxation. That's going to be so delightful. I'm already looking forward to the pics.

That trip is certainly mounting up. I'm glad you're building in a getaway, too. I've been to Vero Beach, so long ago it's probably different now.

It sounds like it is going to be an amazing trip.

Sad that some places are just junk yards.

We all need little escapes
Enjoy

Think of it as a Christmas present to each other and just enjoy yourselves!

Olga's been looking really good in all her photos lately. She's such a photogenic girl.

I'm with you on the la-la-la-la action. When it comes to trips, it's best not to think about the money spent. $1200 for 4 nights at a Ramada Inn seems extremely high to me. I'm glad you found an alternative. A long walk on a beach sounds like a perfect way to chill out.

Wow, that's outrageous! I've spent close to that to stay on the Upper West Side in NYC but I didn't feel comfortable going any cheaper in that area. My daughter and I stayed in Bradenton many years ago for a gymnastics meet and it seems like we were at a riverfront hotel, quite nice. Is there a river in Bradenton?

That sounds like a wonderful trip, especially Vero beach. As I recall, singularities played a large part in many Star Trek episodes. They did require the willing suspension of disbelief.

Yep. You stick your fingers in your ears and don't stop la-la-laing. Your mother's time is running like water through your fingers. The responsible thing for a son to do is to spend as much of that precious time with her as he can.

If you got it, spend it. Enjoy these forays while you're young enough to appreciate them. And store up memories.

"Isn't that the responsible thing to do?" Well, yes. It's good to have those plans settled, no longer hanging over your head. Now all you have to do is get through the next two months...

Too bad you weren't able to snag the Roseland getaway. That would have been amazing.

I agree with Kelly: Olga is looking great these days. Glad her infection was discovered and dealt with. Happy girl!

Definitely a singularity. Well done Olga.
Billy Fury rings a bell. Singer? Band player?
Photos of Vero Beach would be nice, if you remember to take any.

But you got a better deal on accommodations. We'd be talking about how much money we saved -- and figuring out what we were going to buy with our windfall.

YP: I've always said having that alley named after him is no compliment!

Ed: People do get angry when their work is defaced. Sometimes graffiti writers get in "beefs" where they continually go over each other's pieces. I guess you'd have to think of it as an expression of impermanence, like a Buddhist sand mandala.

Bob: Exactly! It's not even the ocean. It's a marina on Sarasota Bay.

Linda Sue: I appreciate encouraging words from a fortune teller no matter their ethnicity. :)

Ms Moon: I'm inclined to save Roseland until we can see it properly and stay at the place with the lions. But who knows?!

Ellen D: Well, yes, there's that kind of singularity too! But as a "Star Trek" fan I always go to the interstellar version first.

Ellen: I guess cities are fated to be trashy to a certain degree because there are so many of us piled on top of one another here.

Marcia: I'm not sure we'll meet up on this trip, unless they wind up in Vero at the same time we do! I tried to interest Dave in Apalachicola, which is close to Lloyd, but he thought that was too far out of our way. (And he's probably right.)

Robin: I'm looking forward to taking some pictures, too!

Red: It's true. I get so sick of seeing trash piled up in the same places in our neighborhood.

Kelly: I think Olga is looking much perkier these days, thanks to defeating that infection.

Sharon: Yeah, it's ridiculous. Even the place across the street is a little much.

Margaret: Yes, the Manatee River! You must have been downtown. We're on the south side near Sarasota.

Allison: Yeah, I was never clear on what one was.

Debby: And the same is true of Dave -- although his parents are healthier than my mom, they're just a year younger than she is.

Bug: It's true. Sometimes you just gotta bite the bullet.

Catalyst: Well, that's true. I'm all for saving for a rainy day but you can't save EVERYTHING.

Chris: It really has made a big difference in her energy levels. A lot of what I thought was old age was apparently related to that infection.

River: Oh, there will definitely be Vero photos! And yes, Billy Fury was an early '60s rock singer.

Mitchell: Ha! Well, that's one way to look at it!