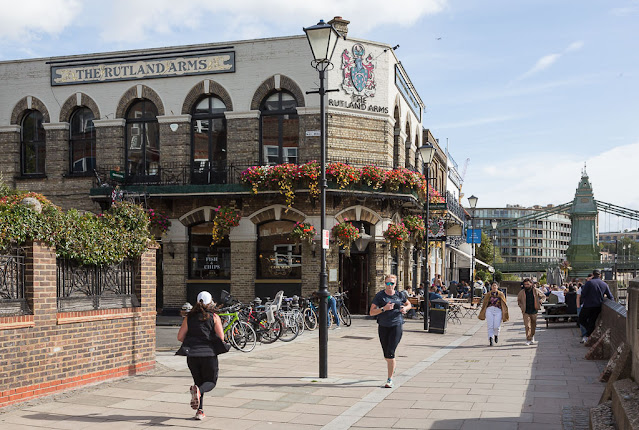 As promised, here are some more pictures from my long walk Saturday along the Thames. We're backing up just a bit to begin in Hammersmith, just before the Hammersmith Bridge (which you can see in the background). There are lots of pubs along the waterfront in West London and I fully intend to go back with Dave and the dog to enjoy a pint or two at those outdoor tables! 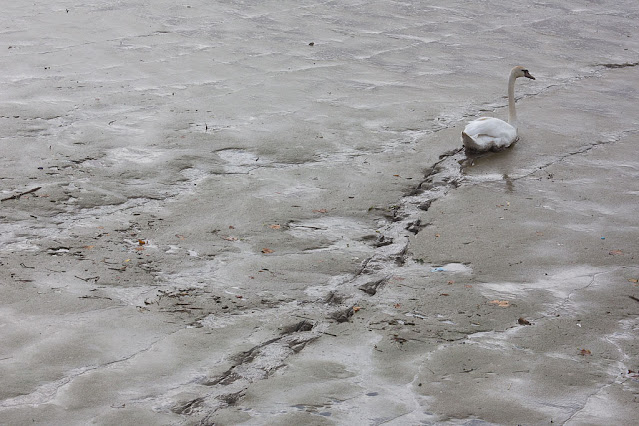 I watched a couple of swans nibbling in the river mud. This one was walking toward the water when it sat down for a rest. I imagine that fine, silty mud is pretty hard to walk in -- it must add a lot of extra weight to their feet. 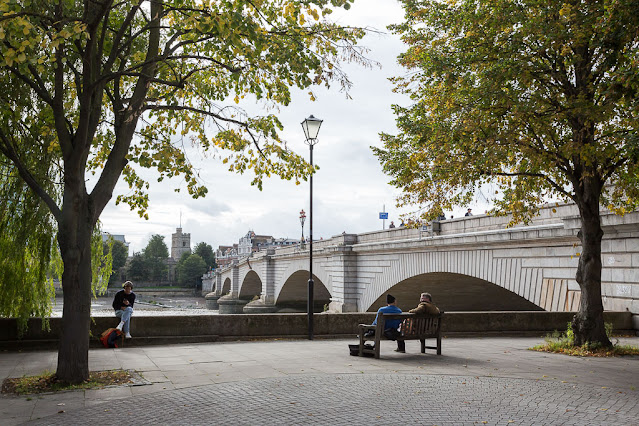 After circling the Craven Cottage football stadium, which I mentioned yesterday, the path led me past Bishop's Park and Fulham Palace and then beneath the Putney Bridge, shown here. 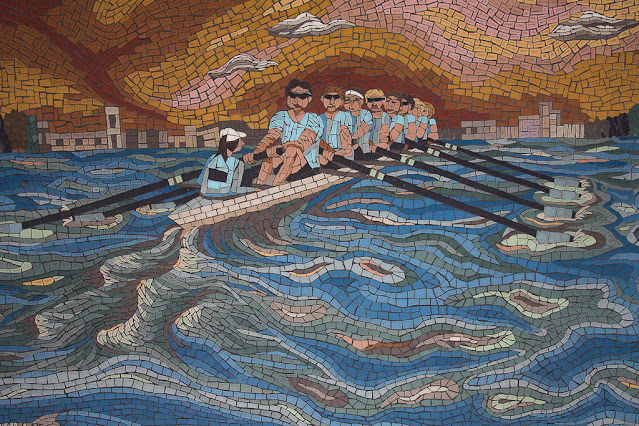 There's a mosaic nearby commemorating the Oxford-Cambridge boat race, "the world's longest surviving sporting challenge." It began in 1829. 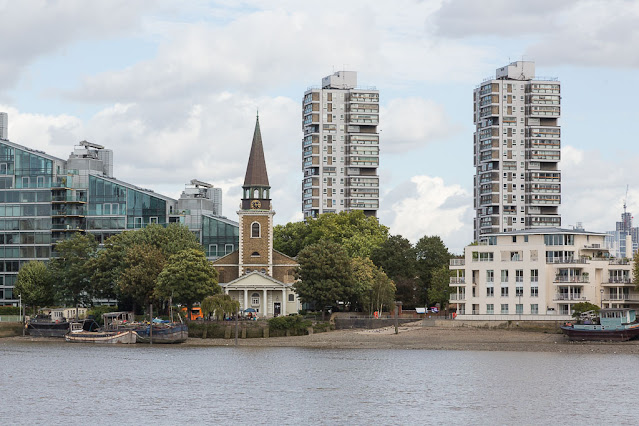 I walked on, circling Hurlingham Park and passing the relatively ugly Wandsworth Bridge. The path got a bit dicey here, because there's so much construction in that area that the directions on the map didn't match what was happening on the ground. I simply stuck to the river as best I could until I got to an area of new apartments near the old Lots Road Power Station, and then I found myself at a dead end.

Across the river I could see a beach in Battersea that I visited more than ten years ago. Back then it was littered with trash but it looks like it's been cleaned up. All the dead sneakers have been removed from the chains along that concrete wall. I think the Thames Path might take me through that area when I walk back along the south shore of the river.

Anyway, being at a dead end near Lots Road, I decided to call it quits there. My dogs were barking, as the expression goes. (In other words, my feet were killing me.) 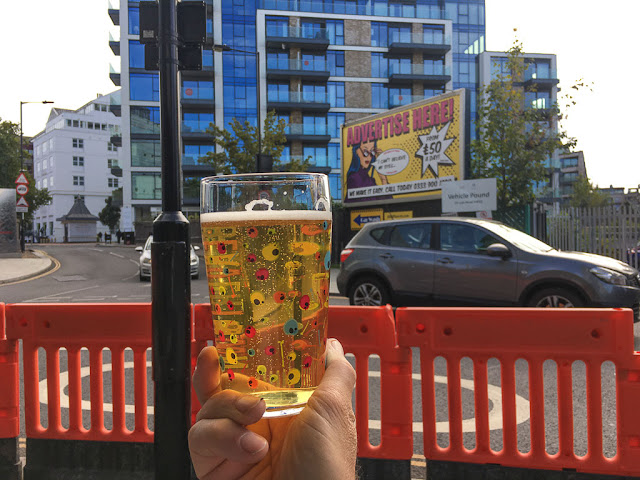 I stopped at a corner pub for a well-deserved pint and sat on a bench outside in the sun behind some orange traffic barriers, watching a surprising number of pedestrians and passing vehicles given that this used to be a pretty remote industrial area (before all the new construction). There are still signs of that industrial past, like the old power station (now being renovated into something else) and the borough of Kensington and Chelsea's vehicle impoundment lot, right across the street from the pub.

I then made the short walk (or limp, in my case!) along Lots Road to nearby Gunter Grove, where I caught the 328 bus all the way back to West Hampstead. Pretty darn convenient.
Posted by Steve Reed at 6:59 AM

How I enjoy these walks with you! The swan photo is a great catch, as if it’s swimming through the shallow mud. And that mosaic! I’m tempted to move to London just for the walks.

Cheers!!
Lovely mosaic..that was worth finding.
It interesting seeing how the landscape is changing, sometimes for the better, sometimes not!

That's a great mosaic. As I am sure you know, it was created by Fulham-based mosaic artist Tamara Froud and her team back in 2013. Nice to see that after seven years of exposure to the elements, it is still in very good condition. I especially like the way she did the river surface.

P.S. If your feet were killing you, maybe it is time to invest in some new, more comfortable walking boots.

Great walk again. I like your finding a nice pint while you watch the passing scene.

Love that mosaic, and of course the old and new architecture.
Thanks for the stroll.

I think this must be the perfect time of year for your walks.

It sounds like you deserved that pint! A good walk but too bad you have to deal with so much construction along the way. That mosaic is a stunner, beautifully done. Now I'm trying to remember if Hammersmith is where that interesting Music Museum is we visited. Must look that up (a very fun place!)

My favorite photo is the mosaic. I love the swirling tiles!
What a terrific walk!

A lovely walk there, Steve. I always appreciate seeing what you see there. I know I'm never going to visit London, so I have this vicarious journey whenever you take a nice long walk. Thank you!

We did quite a bit of walking on Saturday but I doubt as much as you.

Great walk- I have been curious about that area- the rents are lower, not by much but enough to make me think I could stay there for a bit- you know, in my dreams. Nice pint glass!

I think my favorite photo is the swan in the mud. I also really like that pint glass. I'm glad you held it up to the light so we could get the best effect.

I really enjoyed all these photos. The first thing that struck me was all the people in the first shot in shirtsleeves. It must have been a very nice day. And, that pub in the photo looks very nice. The mosaic of the boat race is nicely done even if the water looks very choppy in the image. The 5th photo of the skyline across the river is also fascinating. Those apartment towers are interesting as is the glass building to the left. That glass used to serve your beer looks very retro. I like it. It's amazing that you could get a bus that would take you all the way home. Another great walk!

I wondered how ugly could a bridge be and then I clicked the link. What were they thinking?

That mosaic is lovely! Thanks for taking us along!

I bet you were tired! London does has very good public transport. I have used the DART system (Dallas Area Rapid Transport) in Dallas, which is extensive, but buses and trains are just not frequent enough and so many of the bus stops are just by the side of the a major 6 or 8 lane road with no sidewalk or crosswalk - very inconvenient and dangerous to boot! Great photos. Poor swan.

Love the mosaic and your beautiful pint! I need to find more scenic places to walk than around my boring neighborhood.

I do love to read about your walks and I love that phrase "my dogs are barking"- I use that one all the time. Miss seeing Olga but that would probably be too much for her.

That was a very nice walk. The Rutland Arms looks very gay, still with plenty of flowers blooming. Poor swan must rethink what it does at low tide.

Very nice mosaic. You have such a lot to see along your river. I'm wondering now what I would see and photograph if I walked along our Torrens River.