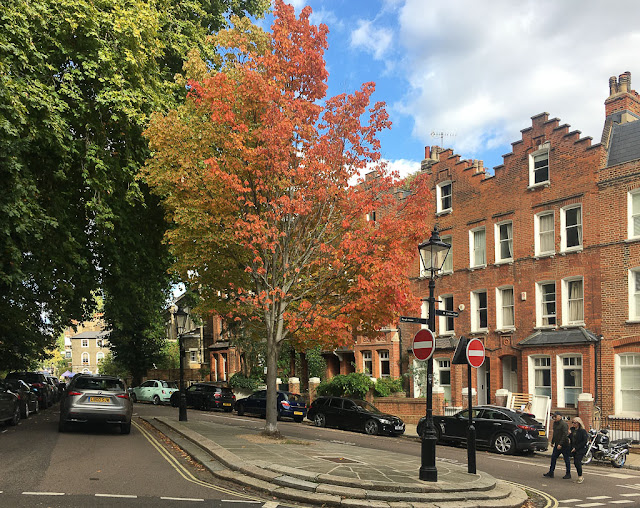 So what else did I do with my weekend besides my long Thames walk on Saturday? Well, I spent Sunday morning working on a bunch of household projects, mostly cleaning and routine maintenance. I got a lot done and it felt fulfilling.

I also finished that John Irving novel I was reading, "In One Person," which was all about sexual and gender identity. It was an interesting exploration of those issues, considering Irving was about 70 when he wrote it, and its ultimate message to resist labels is often associated more with younger generations. I enjoyed it but I wouldn't say it blew my mind.

Then, in the afternoon, I took Olga for a walk. I thought we'd just go to the cemetery but she wanted to explore Hampstead, so that's what we did. 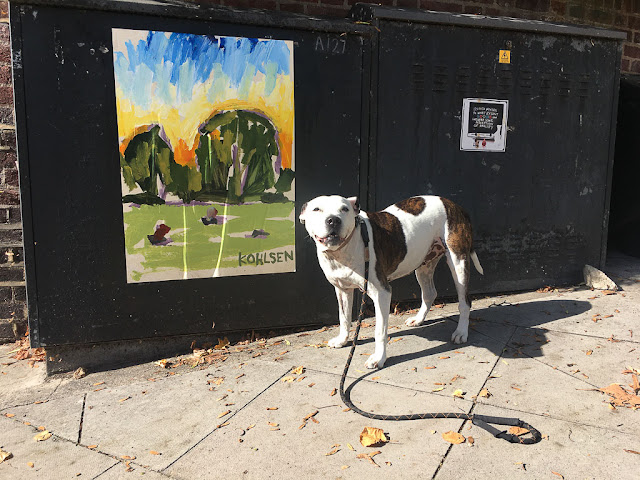 We found an interesting piece of apparently hand-painted street art. 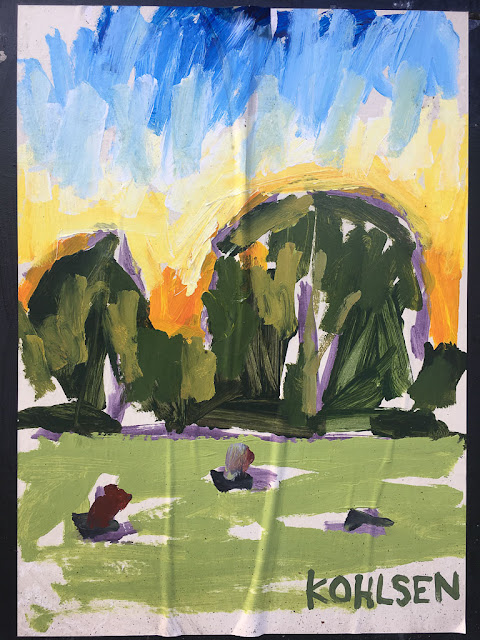 I thought it was pretty good, for something just pasted up on a utility box.

We didn't go all the way to the Heath, but Olga seemed happy enough with just sniffing around the streets. 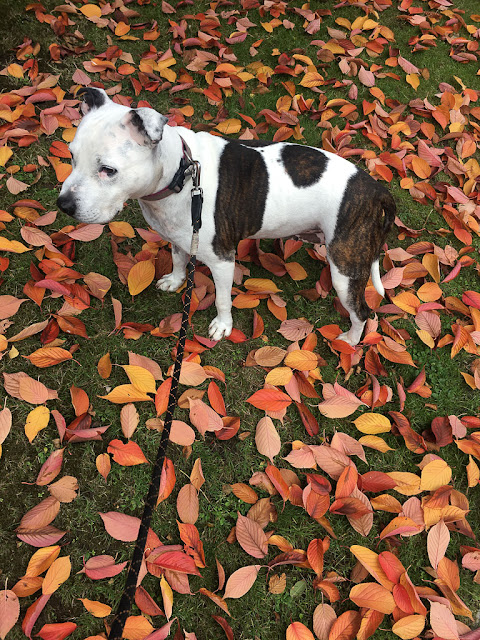 Autumn is coming! (I guess it's already here, technically.)

Last night Olga had a post-operative check-up with the vet. We were seen by the same doctor who diagnosed her with a possible tumor, and despite the clear biopsy results, the vet is not letting go of that idea. She thinks the biopsy could be wrong. But we told her that Olga is much better, her swelling is down, and considering her age we're just going to let her be. If she does have cancer (which I doubt) it's moving very slowly and we wouldn't do anything heroic anyway. I am not going to chase ghosts. We got a medical test and it was clear and that's the end of it, as far as I'm concerned, unless we're given reason to believe it's not. Time will tell.

Have any of you noticed a Blogger peculiarity where old comments are being put into the spam folder? The Blogger code geeks seem to have ironed out the problem with new comments going to spam, but in checking my folder I've found that a handful of comments -- even my own! -- on older posts are going in there. I have no idea why this is happening but I just approve them and move on.
Posted by Steve Reed at 7:06 AM

Yes. I found some of my own comments in my Spam folder too.

Such great photos. Olga goes well with that art. In my opinion, Kohlsen has quite a gift.

This is just a wild guess - almost off the wall - but could it be that the vet is thinking about future fees when she says that the biopsy might be wrong? After all Americans who live in London have so much money that they are fit to burst so why not dish some of it out to destitute vets?

Yes, blogger did that to me once about a month ago...

Really good art pasted on the box...at least you can have a photo, if not the real thing!

Humdrum housework does take so much time....

Yes, same issue with Blogger comments. How can I as the author go into spam?

I trust your opinion as the Olga owner better than the vets. Just let her be.

My partner complained about dog Fuzzy constantly wanting to sniff. I replied, that is what a walk is to a dog. It is not about continually walking without focus. It's their chance to stop and sniff. That is what they enjoy about walk, not the walking itself.

Lol, maybe Yorky Pud is on the money, so to speak.

I'm having the same problem with blogger putting comments, even mine, in the spam folder still.

As for Olga, since you don't plan on treating any potential cancer, it doesn't really matter. I would never put an animal through what we do with our patients, or Miss Katie for that matter.

Same here with the comments folders.
Olga looks very fine. I think autumn is her season.

I haven't seen the old comment issue but I still get the occasional new comment tossed in the spam file. Sometimes I think they hire the B-team to work on Blogger.

It's beautiful there in Hampstead right now. I see from all those leaves that your color is farther along than ours. Looking good. I'm with you on Olga. The vet may or may not be right but given her age and that she's comfortable, I think you guys are being kind.

I haven't noticed old comments going to spam, but then I check the spam folder every few days to clean up what should be there and publish what shouldn't.

You're not chasing ghosts. I like that phrase. You're right. The vet will have to earn her money the old fashioned way by treating sick animals.

I was being naïve and thought that once blogger had corrected the previous issue, it wouldn't happen again. But I just looked and my spam box was full of of comments, including one of my own from a post quite awhile ago.

P.S. In the interest of self learning, can you recommend a book on gender and sexual identity geared towards heterosexuals? Perhaps the one you just read is it but I'm looking for the best.

I noticed that the other when I checked the spam folder and found my own in there. Interestingly there is one spammer whose comments have returned after a hiatus. That jerk's comments don't show up in the spam folder. I think google's algorithm is a bit screwed up.
I like your calm attitude about Olga's age and health. She is in such good hands and hearts.

That picture of Olga surrounded by the colorful leaves is beautiful. That one is frame worthy.
Yes, I've noticed the odd spam issues. I have actually had a new spammer who has posted comments three times now and they each have gone directly on to the blog. I've marked them as spam all three times. While that was going on, I found comments from regular readers in the spam folder. The strangest one was when I found a comment in the spam folder while it was also posted on the site. Apparently this spam thing is a tough situation to fix.

I'm glad to hear that Olga's biopsy came back clear. We're have a spate of cooler weather but not nearly enough to cause fall color which we rarely get anyway.

I haven't seen any old comments in the spam folder but I do have to remember to check it as I did just now and found a current comment in there.

Cheers
P.S. I Just Vented A Rant About The "fixed" Blogger Updates

Although I appreciate spam folders, my email and my blog can't seem to get it right! (I have typepad though and not blogger) Finally, typepad is recognizing a few commenters who have unusual names or pseudonyms. But I always have to check the spam folder because I don't trust it! Some medical people hate to be wrong.

The new thing blogger is up to is posting comments twice. So I publish one, delete one.

I do like how you know what Olga wants to do. It's true of pets we know well, and mysterious to outsiders.

Olga is looking great! I especially like her posed in the colorful leaves. My ex-BIL was recently told by a doctor that they were 99% sure his growth was malignant. Turns out it wasn't. Doctors make mistakes and should own up to it when they do. That goes for vets, as well.

I just found a comment marked as spam, right next to a comment from the same author which had published. Blogger's comment algorithm has issues.
It's odd that a vet would just casually say a biopsy is wrong. Generally the people that do those tests are smart and dedicated to doing it right.

We will all be sad to see Olga cross over the rainbow bridge but that's one of the sad part of having pets.

Olga looks lovely surrounded by the leaves. I agree with your decisions about her future.
I rarely find comments in spam these days and the one this morning actually was spam, so I deleted it.

Rachel: I don't know why Blogger can't get this spam thing sorted out.

Mitchell: I thought so too! It's a simple painting but it has some energy.

YP: It could be money, but I suspect she is simply loath to admit that she was wrong.

GZ: A photo will have to suffice. There's no way I could get that painting off there!

Andrew: That's exactly true. I always let Olga go at her own pace and sniff where she wants. I figure it's HER walk, so let her do what she wants.

Pixie: Yeah, unless you understand the objective and the goal, it just seems like torture.

Ms Moon: Olga enjoys all her seasons, I think!

Jeanie: Thanks for the vote of confidence in our decisions re. Olga!

Bob: You'll probably see it happen on your blog too. Just this morning there was a comment in my spam from weeks ago, one that had already been published. So weird.

Debby: Exactly! As far as I'm concerned Olga is well until she tells us she's not.

Ed: Hmmmm...let me think about that! The Irving book wasn't bad but I'm not sure it's one I'd recommend.

Robin: It's frustrating when REAL spam doesn't go in the spam folder!!

Sharon: You know, I haven't thought to check whether comments in the spam folder were appearing on the site already. Maybe the old ones in particular are already published so it doesn't matter that they're in spam?

Ellen: Yeah, it's always a good idea to keep an eye on it!

Padre: Ooooh, I love a good rant! (Especially about a problem I can identify with!)

Margaret: My problem with your blog is that Blogger doesn't recognize when it updates. It sits down at the bottom of my blog list no matter what, which I find very frustrating. (That's why I miss some of your posts.)

Boud: Oh, I haven't noticed THAT problem! Why can't they get this commenting thing right?!

Kelly: I agree. I think this vet's reluctance to let go of the tumor idea is partly because she doesn't want to admit she's wrong. Of course, she may be right, but as I said, time will tell.

Allison: I agree. I think it's unlikely that a biopsy would be incorrect, but it DOES happen.

River: Well, it's nice to see the spam folder actually does its job occasionally!!

Thank you. That was what I was guessing and why I asked. Since I probably won't return to this post, feel free to shoot me an email linked on my blog or post it in a comment on one of my posts... that is, if you can think of a good one that you would recommend. If not, that is fine too. No pressure.

Yes. This morning I fetched a comment from Andrew dated Sept 13th out of spam. My reply made a lot more sense once his comment was restored.