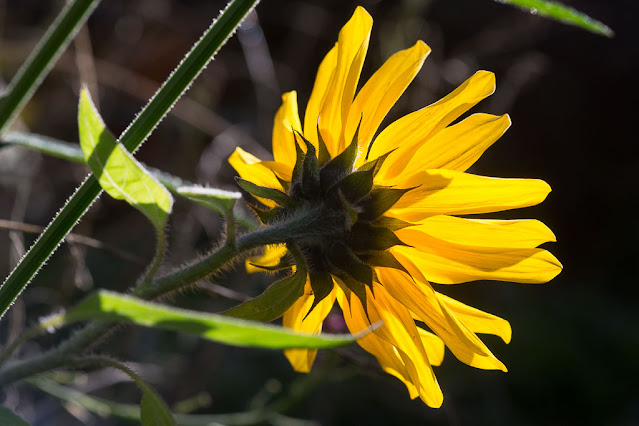 We still have some flowers desperately hanging on against the increasingly chilly and dark days and nights. The sunflowers are still blooming, and in the end we got a flower on every plant, even the ones that didn't grow much more than a foot high. 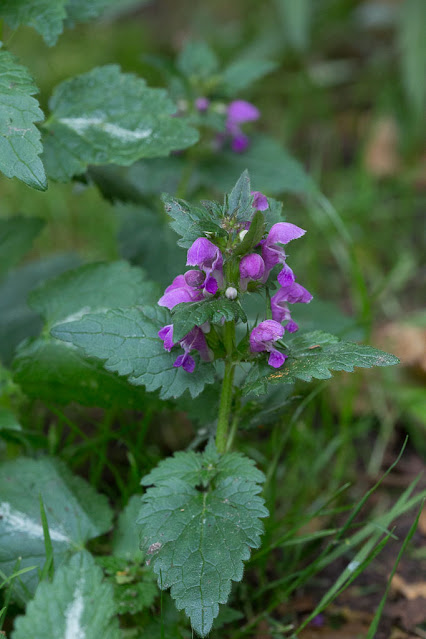 The lamium, with its leaves bearing a single silvery stripe, is putting out little purple hooded flowers... 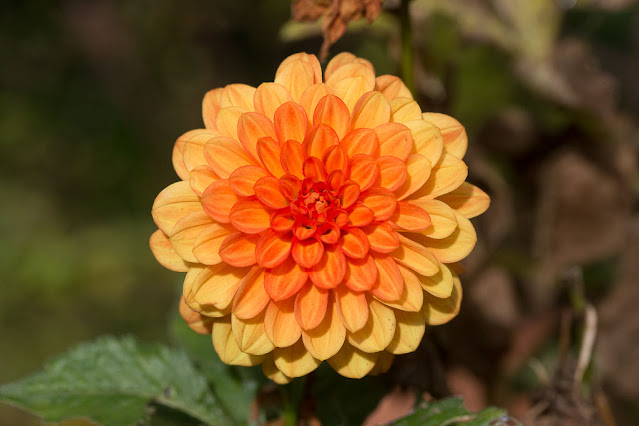 ...and the red dahlia is giving us a last gasp too. These flowers get so much paler late in the season; in summer they're bright red. Some of our other dahlias have already given up the ghost and I've cut them back and put them in the shed.

So what's been happening around here while I've been fussing with ancient quilts and autograph books?

Well, I went to the doctor two days ago because last week, while I was in the airport in Miami waiting for my flight back to London, I looked down at my arm and noticed a strange purple-brown spot. I was sure I didn't usually have a spot there, so it freaked me out a little. It wasn't scabby and didn't look injured, so what was it? Always wary of skin cancer because of my years in sunny Florida, I decided to have it checked out. Fortunately between then and Monday, when I saw the PA at my doctor's office, it lightened considerably. The PA looked at it with her magnifier and said she didn't think anything was amiss. I'm supposed to keep an eye on it but now it's basically gone. False alarm!

I also mailed Dave's ballot to Michigan, and I looked up my ballot, which I mailed several weeks ago, and saw that it's already been counted. So that's good. I have officially voted.

Dave and I just finished a show on Netflix called "The Watcher" which we enjoyed. It has a very good cast and some excellent performances, and apparently is loosely based on a true story. In a nutshell: Yuppie husband and wife buy their dream home and begin receiving menacing letters indicating someone is keeping an eye on them. Very Halloween-ish.

At one point, one of the characters, played by the excellent Jennifer Coolidge, is having lunch at a country club and tells the waiter to add more wine to her glass. "I need a holiday pour," she says. Dave and I laughed so hard. I will be forever grateful to this show for introducing me to that term.

Also in pop culture news, I finished Nancy Milford's biography of Zelda Fitzgerald. It was excellent, though in my opinion Milford goes into a bit too much detail about the plots of Fitzgerald's novels. (In an effort, I'm sure, to show us how Fitzgerald incorporated her own life into her writing.) What a tragic case she and her husband were. At one point, as Zelda became more and more mentally unbalanced, the book said F. Scott Fitzgerald was drinking 30 beers A DAY! A holiday pour is one thing, but that boggles the mind. 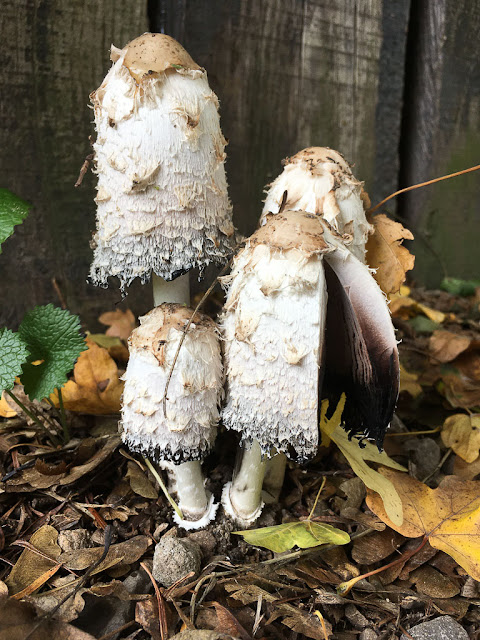 Finally, here's another interesting thing growing out there right now -- a shaggy ink cap mushroom. I came across this cluster at the cemetery, where I've found them before. They are beautiful in a sort of ghostly, Halloween-appropriate way.
Posted by Steve Reed at 6:45 AM

The back of the sunflower is beautiful. I've had friends and husbands capable of drinking 30 beers a day and they often did. I'm glad I divorced them, one was a sleepy drunk while the other was a violent drunk.
Those mushrooms don't look tasty at all, ha ha.

How do the shaggy ink caps taste? What a pity I don't like mushrooms.

I thought those mushrooms were some kind of Halloween artful assemblage. Beautitufl! I wonder if that purple-brown spot was simply a bruise you didn’t realize you had gotten (I know people are you say “got”). The autumn red dahlia is stunning in that light.

Easy enough to get a slight knock in the wrong place while you are busy doing something..glad you had it checked out anyway.

Our hollyhocks are hanging on, despite being whipped about by the wind!

Fungi come in such weird and wonderful shapes and colours..just think, neither plant or animal..and lichens too. a symbiosis.

I saw The Watcher pop up and thought it looked interesting. I may give it a go after I finish the current season of Bling Empire. I'm not sure why I continue to watch it. It is like a slow motion train wreck I guess and I just have to see how everything ends. It also makes me feel much better about my life of not being uber rich.

Thirty pints of beer? That's nowt for a Yorkshireman. Just a teatime tipple. As for The Shaggy Ink Caps, they were one of my favourite indie bands back in the 90's.

I agree with Mitchell, the mushrooms look like some scary display for the front stoop.

It's almost impossible not to look at the shaggy ink caps and see little people there, albeit one-legged little people.
Glad your arm spot was nothing. Wait until your skin gets so thin that you look down to realize you're bleeding with no idea how you injured yourself. Probably slapped a mosquito.

That dahlia is delightful! I love that color.
The quip about 30 beers reminded me of my ex-husband which is one of the reasons he is my "ex".
I think the Watcher might be too scary for me!

I'm forever seeing weird things on my skin and thinking "CANCER!!!" So far nothing has actually been cancer, but I'll still be vigilant because who knows? I'm glad yours disappeared.

We have a relative in her 40s who apparently drank so much that now she needs a liver transplant. I know every person is different, but goodness how much was she consuming to get in that situation? I feel terrible for her because I know she was in a lot of emotional pain. Sometimes life sucks.

Clever lineup in your last photo.

Beautiful flowers and those mushrooms do look sort of ghostly. I wouldn't have thought of that.
The news this morning is all about Liz Truss stepping down. I'm sure it is even bigger news over there. Politics around the world is getting crazier and crazier.

Love seeing the flowers there. Ours are mostly gone already. We've cleaned up all of our garden beds for winter. It seems early but the weather has been so bleak and blah.
We get shaggy ink cap mushrooms here too. I love when they pop up in October.
Thank you for the Netflix suggestion. We've been thinking about watching The Watcher. Now we'll give it a try.

We used to eat shaggy manes , they were good, but then , while in Kent , we got a hold of a giant puff ball shroom that had gone off, I have not been able to eat mushrooms since. One bad one, if it does not kill you it will turn you off of mushrooms for life.
The Zelda book sounds stressful.

I remember giving up on the Milford book. I wonder if she gets tired of being confused with the other Nancy, Mitford?

I do like the lichen and fungi of fall. Sometimes the lichen has been there all along but hidden by foliage.

I don't like to eat mushrooms, but I love to see and photograph them. Your shaggy ink caps are wonderful!! They are perfect for the season!

Since you live in the UK, how does where you vote in US elections work? Do you have to register in your state of birth?

Glad the spot disappeared. My dad had skin cancer so I'm ultra aware of anything strange. 30 beers a day! I feel a little loopy if I have two at one time!

Thank you voting. I can not believe the polls and how well the right is doing, even though they want to axe SS and Medicare. Seems like more people should care about that. Anyway, our ballots are in the mail to us at this moment.

I, too, enjoyed "The Watcher." Excellent cast and characters all the way around. Mystery, intrigue, cultural clashes. Loved character played by Mia Farrow, "NOT very neighborly!"

Beautiful mushroom. You know what was odd in Michigan this fall? No mushrooms. We usually start to see them mid-September into mid-October -- loads of them, all over. I didn't see one and I looked hard. Climate, perhaps? Who knows.

So glad your spot was checked and good. And that the ballot got mailed. I've got to drop mine off this week!

That dahlia is gorgeous. Those mushrooms look like a group of gnomes. I will bet they are fun guys.

@ Steve: I wish I drank so I could ask for a "holiday pour" too! I'm glad your discolouration turned out okay.

River: I can honestly say I don't think I've ever known anyone who could drink that much. Just lucky I guess.

Andrew: I haven't eaten them so I couldn't tell you!

Mitchell: I do think it was some kind of minor injury. Probably a fang mark from my brother's dog. :/

GZ: Fungi are remarkable, no question. So mysterious.

Ed: I haven't watched "Bling Empire"! Maybe I should give it a go?

Bob: It makes sense that mushrooms are sort of a creepy symbol of fall.

Ms Moon: It's easy to see where legends of gnomes and dwarves came from, right?

Ellen D: I can't imagine drinking that much. I worry that two drinks a day is too much.

Bug: I've heard various stories about people who drank steadily and eventually needed a new liver. I think the liver is capable of coping with binges but it has trouble with a steady flow of alcohol.

Red: They grew that way! I didn't stage it!!

Robin: Yeah, I'm surprised how many we still have growing. I think the first frost will do them all in.

Linda Sue: Ugh. That sounds terrible. I am not a mushroom forager. I'll stick with the store-bought varieties for consumption purposes.

Boud: I kept wanting to call her Diana Milford, and I'm sure that's because of Diana Mitford!

Kelly: You can vote either in the last place you lived or, if you have a permanent residence, you can vote there. In my case I registered at the family home so that's my permanent US residence. (I'm in the process of changing it to my brother's house, though.)

Allison: The right has done what it always does, which is hijack social issues and use them to mobilize voters. I'm surprised there isn't more backlash against the anti-Roe ruling. Where are all the angry women?

Tara: Yeah, she was great! Having her in the cast added an element of "Rosemary's Baby."

Jeanie: How strange! That sounds problematic, because mushrooms play such a vital role in breaking down plant material. Maybe it was too dry? Too hot?

Debby: It's true! I'm sure growths like this helped give rise to the legends of fairies, gnomes and elves and other forest mythology.

Jenny-O: I suppose you could have a holiday pour of orange juice!

I wouldn't recommend it to you unless it is your "cup of tea". I got started because I'm married into the Asian community which it features. But other than that, it is one slow motion train wreck of a show about the uber rich Asian culture.