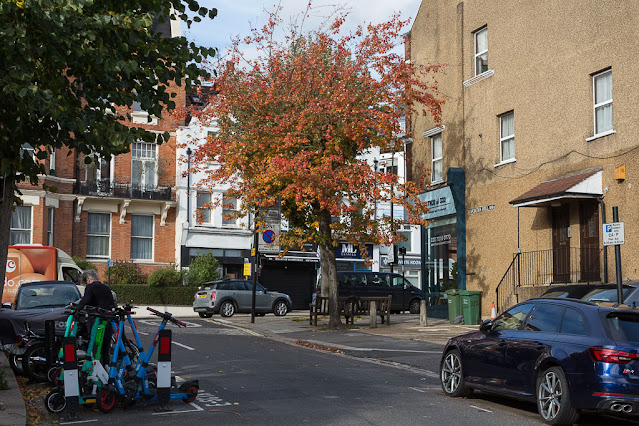 It's feeling more and more like fall around here -- the walnut in the back garden is dropping its leaves and the air has that damp autumnal chill. One of the trees up the street has turned bright orange, adding some color to the neighborhood. So far most of the others are still green or at least green-ish.

That little pocket park in the photo, with the bench beneath the colorful tree, is sort of a problem spot. There's always an accumulation of litter, from people sitting on that bench and dropping beverage cans and snack wrappers. The people who live in the flats above those shops used to put their trash at the base of the tree, but now they've moved it to the curb. It's still an eyesore most of the time.

As I understand it, Camden Council's waste collection program calls for many apartment dwellers to put their bagged trash directly on the sidewalk. They do not have bins the way house-dwellers do. They're supposed to only put the trash out at specified times, just before the truck comes around, but of course people don't do that, and as a result trash piles up in certain problem spots, where the pavement develops a permanently greasy texture. The council really needs a better system. Dumpsters, anyone?

Anyway, I'm not sure how I wound up talking about waste disposal.

I mowed the lawn yesterday. It was getting pretty shaggy and the mower helped gnaw up some of the fallen leaves. I suspect that will be the last go-around for the mower until spring.

And I read my Zelda Fitzgerald biography. I'm about two-thirds of the way through it and Zelda has had two breakdowns so far. Scott, meanwhile, is boozing it up in order to cope. Sounds like a nightmare of a situation. 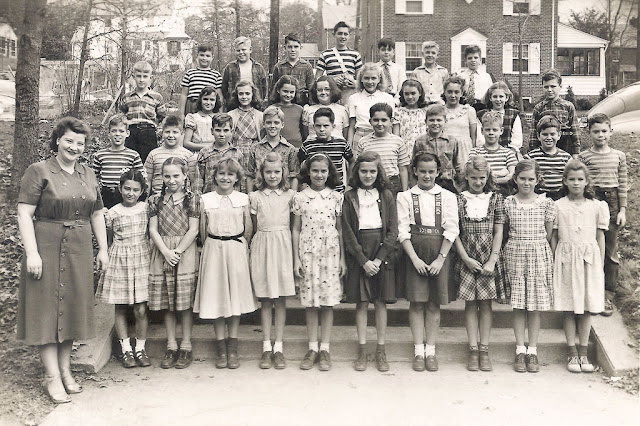 I scanned some more of the stuff I brought back from Florida. Here's a picture of my mom's sixth grade class at the University Park School in Maryland, circa 1948. My mom is in the bottom row, second student from the left, with the pigtails. The funny thing is, on the back of the picture are lots of little notes and doodles about someone named Robert Thompson, and on the photo above you might be able to barely see a hand-drawn arrow connecting my mom to a blond boy slightly above her and to the right. Apparently Mom had a little crush on this Thompson kid.

I teased her about it when I saw her during my visit. We were sitting out by the river and I said, "So, Mom, who's Robert Thompson?!" She, of course, just laughed and I'm not sure she has any memory of who I was talking about, but I told her about the photo. Maybe she remembers him and maybe not. Who's to say?

Her teacher was Mrs. Allen, who I met when I went to Maryland as a kid to see my grandmother. Mrs. Allen went to the same church as my family. She didn't look a whole lot different then than she does in the picture.
Posted by Steve Reed at 6:55 AM

The class photos makes me smile, especially the arrow and Robert Thompson, which truly connects you with your mother as a little girl.

Our trash system with its dumpsters (underground in many places) is very impressive. I’m always shocked by the dozens of huge trash bags piled high on New York’s city streets when trash day approaches. An eyesore.

If Robert Thompson was her very first crush, then I'll bet my boots your mum remembers him.
I remember my first crush, his name was Joe and at the time I was convinced we'd get married one day. BUT, I don't remember now what he looked like apart from dark hair.

The boy in the striped shirt standing next to Robert Thompson looks like he wants to kill the photographer. By the way, Robert Thompson was also the name of one of the young Liverpool boys who horrifically murdered toddler James Bolger in 1993.

One would really think that in one of the greatest cities in the world basic rubbish collection would happen in a practical manner for residents that did not result in piles on the street.

Some nice memories of yours.

The garbage bags is one reason I am not a fan of cities. Never seen one without its share any time.

Your mom and I are almost age mates. But we didn't do class photos, so I can't pick out kids whose names I remember from kindergarten even! She was a cute girl. I wonder if the crush was requited.

Oh, I think that laugh might have been a memory! And I love that you showed it to her and shared.

Why can't people just carry their trash to a bin or keep it till they're home. I will never understand. It's not hard!

Oh that arrow should have had a heart with it!

Well, obviously Robert Thompson was the cutest boy in the class. Your mother had excellent taste in good-looking young men. I love all of the striped shirts. So Leave It To Beaver.

They look so young. How sweet that your Mom drew that arrow to her crush!

The backside of my property runs along one of the main thoroughfares to the community college and because we are on the edge of town and there aren't any houses up next to the road, it gets a lot of trash thrown out the windows of vehicles coasting down the hill and getting reading to turn into the college entrance. When I first moved in, I would pick up a bag of garbage once a week when I mowed it. But after all these years, I have just given up and let it gradually blow into the woods where hundreds of years from now some archeologist will discover this interesting seam of plastic. Fortunately none of this is visible from my house since the woods block our view of it.

I'm surprised that the apartment buildings don't have a proper waste disposal system set up.

Your book about Zelda Fitzgerald sent me down a rabbit hole. I didn't realize that Zelda was a writer too. F. Scott sounds like he was a bit of an asshole, plagerizing his wife's writing. Two very unhappy people, sadly.

Horizontal striped shirts, all the rage- or a clearance sale at Penny's? Your Mother is so adorable with her plaid dress and braids. Sixth grade crushes are memorable!

It seems very odd to me that apartment dwellers don't get to put their trash in garbage cans. Sometimes what's in a garbage bad is a stinky mess and needs to go out long before the truck comes. Ugh.
Love that old photo of your mom's class.

I love seeing that photo. I enjoy looking at all the clothes and hair cuts on the kids. They aren't much different than how kids looked in my class photos some 15 years later. Striped shirts for boys was popular then and the girls shoes look familiar. Great photo.

I was wondering about your biography of Zelda earlier and I think you've probably answered my questions. I don't believe I care to know any more about them than I already do.

I would think garbage sitting out in bags would attract critters. It almost seems like a health hazard.

So much to see in those old class photos! We (my sibs and I) were fortunate to be able to go through old photos with our mother not too long before she died. Her memory was sharp and she filled us in on a lot of details. I treasure the memory of sorting through those boxes of photos.

I guess at least the pretty tree rises above whatever is on the ground below. But city garbage is definitely an issue!

Your mom is adorable with her plaits - and she had good taste in crushes!

I love those old photos but my mom wants to throw them all out. I don't want to think of how many she's already trashed. (thought I would stay on the garbage theme!) That is a HUGE class. I wouldn't have wanted to be that teacher.

In those ancient photos clothing style is interesting. Horizontal stripes must have been in as far as boys are concerned.

Your mom sure was cute as a 6th grader, and the recent photo you shared (with her hair in a scrunchie ponytail) shows that she still is.

I agree with Margaret: 37 children in one class! Mrs. Allen must have been one heck of a teacher.

PS - Harkening back to your visit with your mom, that "Yes!" had me tearing up a bit.

Mitchell: And I think New York manages its trash much better than London does.

River: How quickly our crushes come and go!

YP: I imagine it's a fairly common name. I hope people who Google the murderer don't come across this blog post by mistake!

Andrew: One would think. The mistake is asking residents to dispose of it only at certain times. People want to get it out of their house, period, and will do so whenever it's convenient.

Boud: I don't know how Robert felt about the whole situation! (If he even knew.)

Jeanie: Well, that's another thing about London -- there are very few public trash bins, particularly in certain areas. In New York there's one on every corner, but here you have to walk a long way before you come across one, so people drop their trash beneath trees or leave it on park benches.

Ms Moon: I noticed that too -- horizontal stripes on the boys, and plaids mostly on the girls.

Ellen D: They DO look young. Much younger than I felt in the sixth grade.

Ed: How infuriating. I've never understood people who just pitch trash out of a car window.

Pixie: The Fitzgeralds are a case study in substance abuse. As for apartment trash, some larger buildings do have more integrated systems or dumpsters. It's the small flats above shops that are more likely to put trash right on the street.

Linda Sue: You can definitely see trends in youth fashion! But no printed t-shirts, sports gear or slogans like nowadays.

Robin: I know! Is a person supposed to keep smelly garbage in their house until trash day?! No one's going to do that.

Sharon: I think kids' fashions stayed pretty static for a couple of decades! Even when I started school in the early '70s we were wearing some similar stuff.

Kelly: They are a tragic couple, and there are a lot of factors in their downfall, but the primary one is definitely alcohol.

Wilma: I also sat with my mom looking through our photo albums a couple of years ago, and it's a memory I cherish! She loved to laugh at the funny ones.

Bug: It's still a pretty corner, overall. But I do wish the trash was better managed.

Margaret: You know, I didn't even think about the number of students, but you're right -- it IS a big class!

Chris: It was a worthwhile visit for so many reasons.