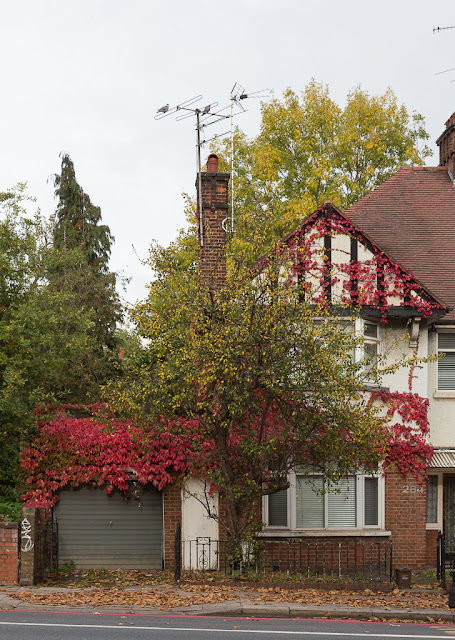 Yesterday a 7th-grader came up to my desk and asked, "What's metaphysics?"

Although I believed I had a vague idea, I had to Google it to give him an answer -- "the branch of philosophy that deals with the first principles of things, including abstract concepts such as being, knowing, identity, time, and space."

"What's epidemiology?" he asked. This one I knew from my work in the Peace Corps. It's the study of public health, more or less.

"And what's epistemology?" he asked. I realized he was reading these terms from the list of Dewey Decimal subject ranges posted on my desk. Once again I had to resort to Google -- epistemology is the theory of knowledge.

"As you can tell, I never studied much philosophy," I told the kid.

"That's OK," he said, comfortingly. He went to the shelves and checked out a book called "Discourse on Metaphysics: Correspondence with Arnauld, and Monadology."

Good luck with that. I will stick to my Tasmanian murder mystery. 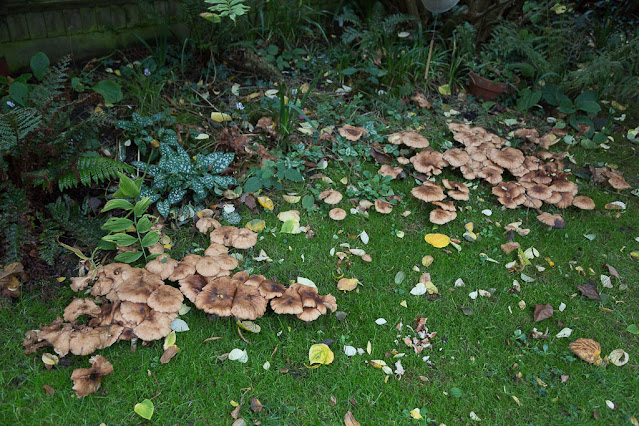 The mushroom crop in our back garden has continued to be rather spectacular. I'm not sure that's a good thing, though. I started Googling around to figure out what kind of mushrooms they are, and I landed on something called Honey Fungus -- which sounds like a serious problem. It sure looks similar to me.

(I can just hear that student: "What's mycology?")

Based on what I've read online, if we have that in the garden we're moving. I am not dealing with excavating large quantities of soil. I suppose I should get a professional opinion and/or alert the landlords. 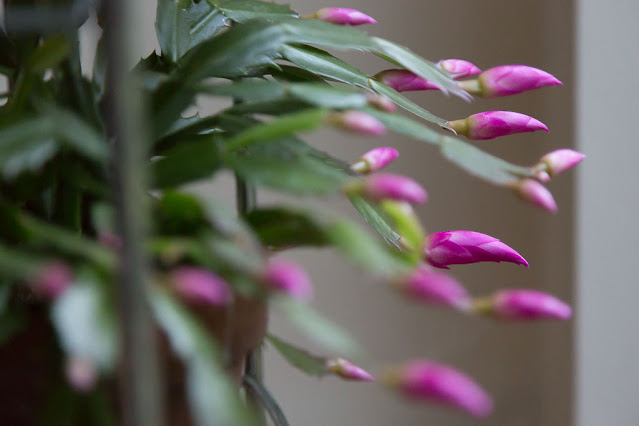 On a brighter note, our Thanksgiving cacti are budding. It looks like we should have a nice display this year. In addition to this one, the salmon-colored one and a white one sent to me as a cutting by blog reader Frances are also both in bud. I haven't seen the white one bloom yet -- last year it dropped its few buds as it was still quite small -- so hopefully this year we'll get some flowers.

(Top photo: A very autumnal-looking house on Finchley Road.)
Posted by Steve Reed at 6:53 AM

Are visitors to "Shadows and Light" allowed to ask questions at your virtual library desk? Here goes:-

When did time begin?
Is there life after death?
What are dreams?
What is the goal of humanity?
What is antidisestalishmentarianism?

I will await your informed responses with eager anticipation.

Pleased to hear that you have buds on the cutting I sent you. It might turn out pale pink rather than white. I noticed yesterday that the parent plant is covered in buds. I read somewhere once that you shouldn't move their position when they are budding/flowering.

Honey fungus..what is not needed....but the fruiting bodies are only a small part.

In second grade, I was only interested in the latest Stephen King novel. I'm impressed by that boy.

From what I read on the Honey Fungus, it only grows on the woody remains of trees and shrubs. That doesn't look to be the case in your photos. It still looks like the Fairy Ring (Marasmius oreades) mushrooms that we sometimes get though perhaps in your small yard, the entire ring can't sprout.

You are better than I at handling the kids and their questions.

It doesn't really look like the pictures of honey fungus to me. Try not to over worry yet.
The child- what a desire to learn he must have! I'd be curious and talk to some of his teachers to see what they know about him from class.

Lots of big thoughts for a young boy! I hope the dryness of the material doesn't dampen his interest in Philosophy.

I hope the mushrooms aren't what you're afraid they are!

We used to say antidisestalishmentarianism very quickly in my speech class as a tongue twister. Also, "Betty Botter bought some butter..."

I'm not sure about the identification, but the good news is that if it truly is honey fungus, it's edible! There you go. Your own food patch. You can eat sauteed mushrooms every day for the rest of your life!

I like that you're the sort of adult that children feel comfortable asking questions of.

I love the questions that 7th grader asked. What interesting things to be thinking about at that age.
Sometimes it's really hard to identify a mushroom. Now I'm wondering if there is someone who can be called to really ID it.

Nothing better than curious kids. These terms will rattle through his brain and attach themselves to other concepts an widen the kid's understanding of many topics.

That is some pretty heavy reading for a 7th grader.
I love the fall look. We still aren't seeing it here yet although, there has been a bit of chill in the air the last two days.

Surely there are easier books on metaphysics for 7th graders than the one he picked out which does not sound very engaging.

What's the big deal with the mushrooms (I looked them up too)? Why would you even consider getting rid of them? They'll be gone soon enough. They do serve a function.

The parts of the fungus you're seeing is only the visible fruit. It's a huge underground network and any attempts to attack them will spread the spores faster. Doesn't look very serious to me. It may have been dormant through the previous drought and the recent rains have revived it.

The cynical ex-teacher in me wants to compare that student to 3 year-olds who keep asking "why?" to each answer you give them.
He either has an IQ greater than the number of days in a year, or he's using the book to prop up his Gameboy.

Well, honey fungus sounds bad. I'm hoping it's the fairy ring kind. Does Olga eat stuff on the ground?
You haven't mentioned the Russians for awhile, is their work complete now?

That's an ambitious kid. I hope your honey fungus problem doesn't spread to other areas of your life.

Hmmm.... well everyone has an opinion, but for what it's worth, I'd just leave the mushrooms alone. I wouldn't think that problematic variety would have just popped up overnight en masse. Besides, I've always been told that if you kick them over or knock them down, it just spreads their spores so you get even more.

I'd read somewhere that mushrooms in the lawn is a good sign. Personally, I hate them--but with our damp weather, they are chronic. My son-in-law is ABD in Philosophy, so I'll have to test him on those terms. ;)

I'd be sticking with a murder mystery too.
The mushrooms will continue to spread as they release their spores, the next patch will be bigger. You'll have to nip this in the bud and soon.
Your cactus is going to look so pretty.

YP: I'm only paid to answer students' questions. For you, there is Google. :)

Andrew: It DOES sound terrible. Hopefully this is not it.

Frances: It's still on the same windowsill and I have no plans to move it, but good to know!

GZ: Yeah, and apparently removing them serves no purpose. The real problem is underground.

Ed: I'm sure you mean in seventh grade, not second! I hope you're right about the mushrooms.

Rachel: That's true -- we were all introduced to epidemiology in a big way!

Bob: It always amuses me what they come up with.

Ms Moon: I hope you're right about the fungus. I've kind of backed away from the Honey Fungus fears.

Colette: Well, hopefully he'll still be interested and who knows, maybe he'll understand it! (Unlike me!)

Debby: Ha! I'm not sure I could eat enough of it to make a difference.

Ellen D: I'm sure she won't nibble them. There's nothing about a mushroom that would appeal to a dog. My brother used to say his dog would eat anything EXCEPT a mushroom!

Robin: He is definitely thinking about big ideas!

Red: Yeah, hopefully when he hears those words again he'll have some idea what they mean.

Sharon: We are definitely getting autumnal in terms of appearance, but our temperatures have been pretty warm.

Ellen: I would only try to get rid of them if they're Honey Fungus, which invades and kills healthy plants and trees. (And even then I'm not sure I'd bother because it's very hard to do.) Any other mushroom I would certainly leave alone.

Boud: Yeah, the gardening sites say the only way to remove it (if it's Honey Fungus and threatening other plants) is to dig out the soil and dispose of it by burning or in a landfill, and I'm not about to go to that much trouble.

Marty: Ha! I'm sure he will try to read it and find it way too hard, but that's OK -- it's good for kids to try difficult stuff.

Allison: No! We're hearing drilling and pounding every night! Olga won't bother the mushrooms, I'm sure.

Kelly: Yeah, I am leaving them alone. Even if it's Honey Fungus the web sites say knocking down the mushrooms does no good.

Margaret: Yeah, I've heard that too and I've always believed it, but when I read about Honey Fungus I realized there are BAD mushrooms (at least for gardeners). Which I never knew.

River: Well, I don't mind if the mushrooms spread as long as they're not going to harm our plants. Apparently trying to get rid of them is almost a futile exercise because there are so many spores drifting around anyway.

Wow -- now that's a curious kid. I suspect he'll go far. And hopefully learn how to Google himself! Interesting about the honey fungus -- I need to look that up.