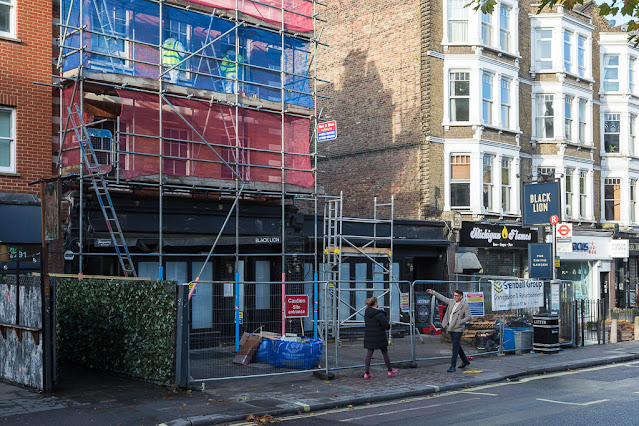 Our pub on the high street is undergoing some kind of huge renovation. (I say "our" pub, but honestly we only go there a couple of times a year. It's our pub more than any other, though.) I'd heard they were going to move some walls and remodel the deck, as I recall, so I guess that's what's going on.

I took this photo just as that guy walking in front of the pub was about to give his friend a very theatrical hug. At least, I assume she's his friend. She's not running away.

Thanks for all the advice about the mushrooms yesterday. I don't intend to remove them or do anything about them. They don't bother me as long as they're not hurting anything, and as some of you pointed out, fungus is usually a sign of a healthy ecosystem. Olga isn't the least bit interested in them, so I'm not worried about her. If it's Honey Fungus I'd be concerned because it can invade and kill healthy plants and trees, but I have my doubts that's what it is -- and even then knocking over or removing the mushrooms (which are just the fruiting bodies of a much larger organism beneath the soil) does no good. For now I'm leaving them alone. 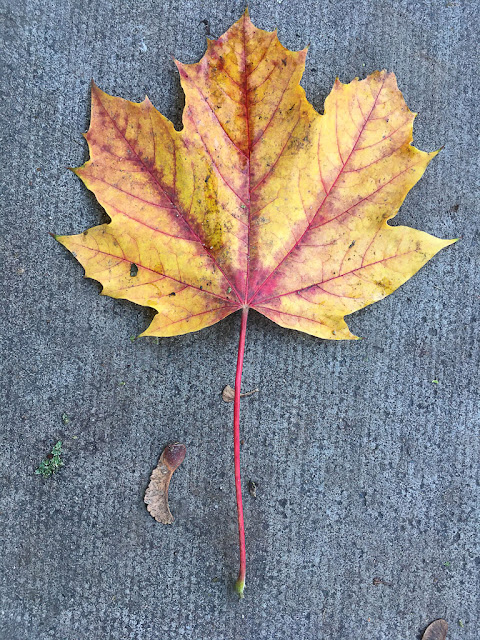 Yesterday I was buried in sending overdue notices. We do it automatically every week, but when things get really overdue I send personal notes, first to kids and then to parents -- and that's what I was doing yesterday, for kids who still haven't returned their summer reading. (It's almost November, for God's sake.) I was typing all morning!

Definitely a theatrical hug, and nice.
So you personalise the overdue notices then?

Hi there! This is your friendly school librarian, Mr Reed. If you do not bring ......................(Name of book) back I am going to start up some nasty rumours about you on social media involving drug use and bestiality. So get the effing book back IMMEDIATELY!
Yours threateningly,
S.Reed
(Karate Black Belt)

Glad you don't have to worry about the mushrooms. Time flies. It seems like only yesterday you were sending out overdue notices.

It looks like a very theatrical one armed hug, or did he remove that other hand from his pocket???

I'm glad you're not worried about the fungi. They'll have vanished in a few days anyway! Do you have students who are routinely on every overdue list?

Sorry about the overdues but I am glad that students are checking out books!

I do really love that hug in progress. It's like a diorama, almost.

I guess I don't have a pub and honestly I can't remember the last time I was in one... at least with the intention of drinking. Probably the last 20 years or so, the only pubs I have been in are for their food and even that isn't often. My social life is pretty lame these days.

I like that almost-hug moment. He looks really read for a big hug.
I'm glad you're leaving the fungus. If they're not hurting anything, they really are a good sign of a healthy ecosystem.
Hope you get some books back today!

It sounds like a big job ahead for that pub.
Here's hoping your work to get the books returned is fruitful.

I always feel both diabolical and nervous when I send a nastygram to someone. It's an....interesting balance. Ha!

I sure do love seeing a pretty leaf! The whole overdue business baffles me. I guess I've just always been a responsible book borrower.

I went to a park program with my grand daughter. They were meeting a police officer. He was there to demonstrate that the police are our friends, and let the kids flip on the lights and sirens, etc.

During question and answer time, a sweet wide-eyed little girl asked, "Does everyone who does a bad thing go to jail?" To which the nice officer responded, "Well, it depends. Sometimes if someone is really bad, we DO take them to jail. Othertimes, we can just talk to them or give them a ticket." The little girl nervously said, "I can't find my library book." The crowd laughed and the police officer said, "Well, now, that's a pretty big deal..." in a joking way. The little girl turned and buried her face in her father's shirt.

The poor cop felt just awful. He tried to back it up, but it was too late.

Perhaps you need to call in the law.

I'm also quite theatrical in my hugs! :) Many people (including adults) don't seem to care about overdue library materials. My parents seemed to think that the police would come to our house if we had an overdue book. They instilled that attitude in me! :)

Everyone should have their own pub

There's one kind of fungus that kills your grass. It leaves circles where the grass has been killed.

Yes, the Black Lion is definitely under some big renovation it appears. Just curious, do you suppose any of your young charges ever read your blog?

Another lovely leaf. I like that you send the personal notes. Makes me smile!