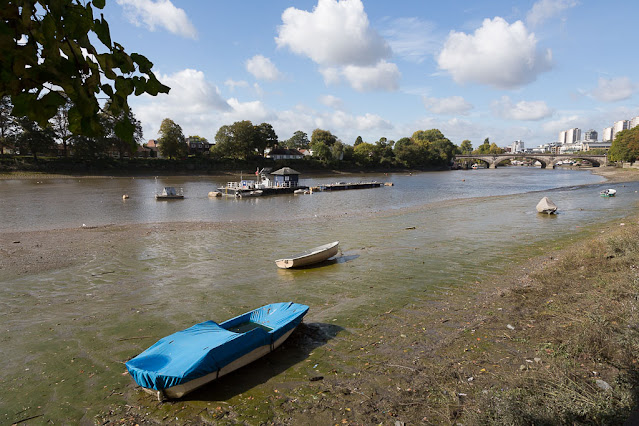 I did get out and walk the Thames Path yesterday, as planned. I went about nine miles, from Kew Bridge (above) to Lots Road in Chelsea. It was a beautiful warm day (t-shirt weather!) and perfect for walking.

I have a lot of pictures, so I'll share just the first batch in this post, covering the stretch from Kew Bridge to Fulham. 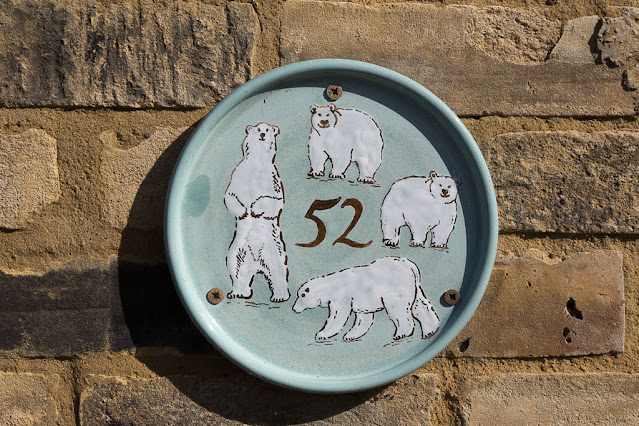 The path took me past quaint but surely expensive riverfront houses, some with interesting address plaques. I'm not sure what polar bears have to do with the Thames, but I like them.

My map told me to watch for blue plaques on the houses, signifying that someone famous once lived there. The example it gave was Johan Zoffany, a painter. I'd never heard of Zoffany (and I didn't see his plaque) but I did see one for actor Donald Pleasence. 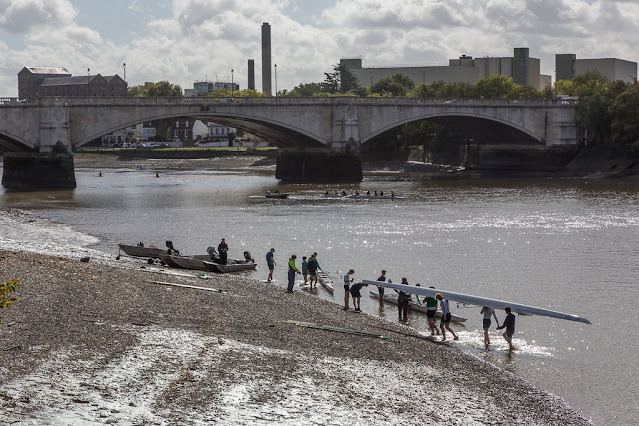 There were lots of rowers out on the water, as is often the case on this stretch of the Thames... 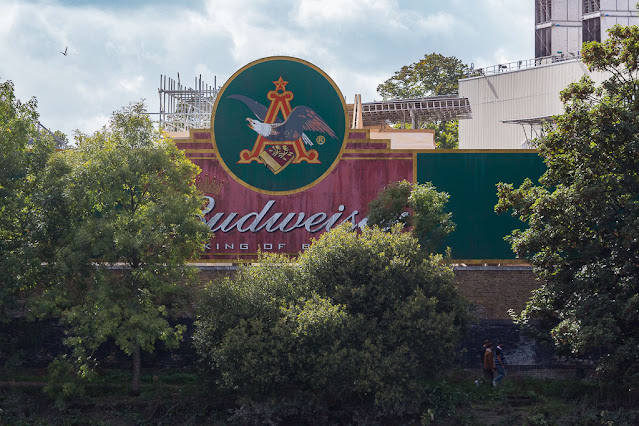 ...and some familiar brand names on buildings on the opposite shore. This was once a brewery but it's permanently closed and is now the object of a redevelopment campaign. Farther downstream there's a beautiful old furniture storage facility once owned by Harrod's, now converted to apartments. 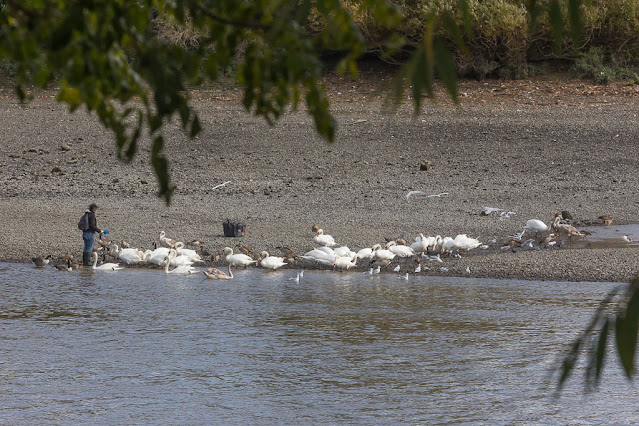 This woman came down to the river to feed the birds. As you can see, she was getting mobbed. 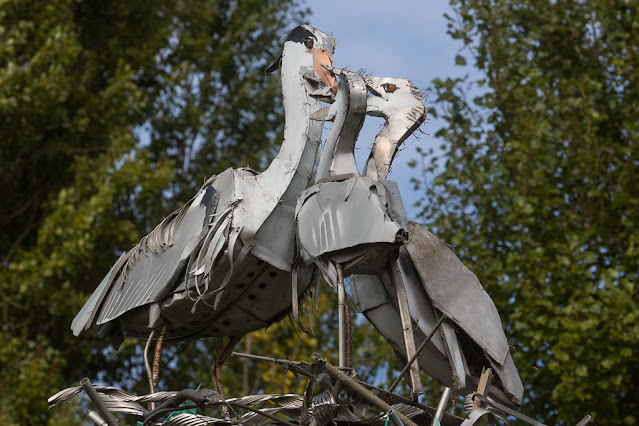 And speaking of birds, this sculpture stands atop a tall pole in Duke's Meadows near Chiswick. It was made of recycled materials by artist Kevin Herlihy and students at Cavendish Primary School, and although the route map erroneously describes it as a gull and chicks, it is in fact called "The Fantastic Herons." 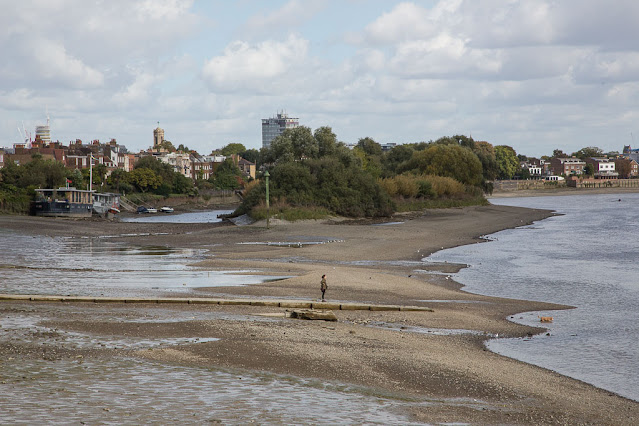 This shows how low the water level is in the Thames. The river is partly tidal, but this is pretty far upstream and it didn't seem to vary much all day. I wonder if this low water level is due to our recent drought. Can you see the woman who walked her dog all the way to the end of that concrete walkway so it could take a dip in the river? (I suppose the fact that there's a walkway there suggests those mud flats are often exposed.) 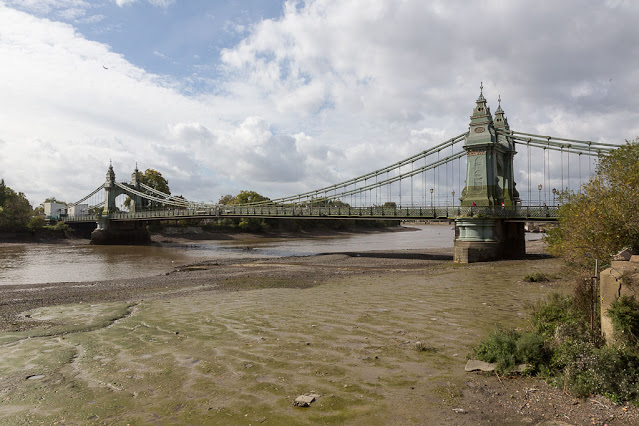 I walked past the troubled Hammersmith Bridge, which is no longer open to traffic because of structural issues. It's now being used by pedestrians only, while various governmental entities wrestle with how to repair it (and who should pay). 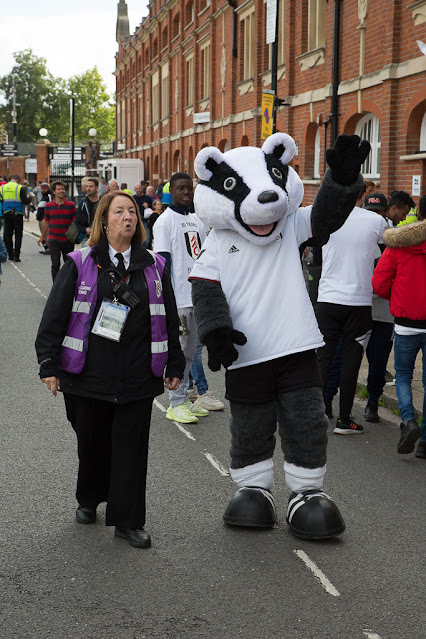 And I circled around the riverfront Fulham football stadium, Craven Cottage, where crowds in black-and-white striped jerseys were gathering for a game. I happened to see Billy Badger, the Fulham club mascot.

As I said, this is just the first leg of my walk. I'll share the rest with you tomorrow.

Incidentally, although I was motivated to get out of the house by the fact that roofers were supposed to be here yesterday, doing their noisy repairs, Dave said they never showed up!
Posted by Steve Reed at 7:20 AM

Sad to see your Thames river in drought, while our own Murray River is flowing much fuller than usual due to all the unusual rain we've been having. Nine miles!

Bill the Badger's girlfriend looks hot! A female badger is called a sow. Baby badgers are called cubs and a male badger (i.e. Bill) is called a boar. Fulham lost by four goals to one against Newcastle United.

As always with your walks, I loved it. Keep it up.

A good walk.
Yes, the Thames is still low..the actual source dried up, the first time in a long time and like many places around, the groundwater levels will take a long time to restore

Did you do any mudlarking? That looks like a good place to find treasure in the mud.

I was just reading an article yesterday about how low the Mississippi was.

What a lovely old bridge. I hope they find someway to preserve it though I understand that it is painful to have to pay for such repairs.

Love the old bridge and the heron sculpture, and, of course, the workers didn't show up!

I don't think they will do anything about Hammersmith Bridge until it collapses with pedestrians on it.

Did you see the pictures of the water sucked out of Tampa Bay during Ian? That phenomenon ran all the way up to Wakulla and Franklin Counties. Rivers were completely drained and dry.
You certainly are able to see and FEEL more when walking than any other way of moving about, aren't you?

It sometimes takes a long tome to walk as we're taking so many photos.

You do see some very cool things out on your very long walks. The old bridge is beautiful, and I love that recycled heron sculpture.

I love this walk. I’d follow it in a heartbeat. So much variety.

Second comment, blessed with afterwit, when you write your book of London walks, any of your blog post titles would work! This one would be great.

That's shocking to see how low the water is, although as you say, if the cement walkway goes down that far, it can't be the first time the water has been this low.

That Harrod's furniture depository is a beautiful building.

I love exploring London with you:)

This route is really taking you into different territory than usual. I look forward to seeing the rest of your outing!

I think that woman is crazy to feed those birds. An accident (mauling) waiting to happen!

That Budweiser sign surprised me. I guess it shouldn't. The water does look a bit low. This looks like an interesting route to take. Lot's to see along the way. That Hammersmith Bridge is quite elegant looking.

Terrific urban photo walk. Do you find that having a camera with you encourages you to see things through a different eye?
Too bad the roofers didn't shw up will you were out and about.

NINE MILES! I bow to you, sir.
I think I'm really accomplishing something when I make 2.5.
-Kate

I love going on these walks with you!

I always love your walk photos - it gives a visual to how diverse London is.

The roofers said Oy - he left! I guess we'll have to come another day.

The low river levels are shocking and scary. No roofers? However, a walk is never a waste of time.

The roofers arrived at our new home at 6 a.m. this past week. We escaped to the BRD's home in Prescott and when we came back at 2 they were done and gone. Our neighbor, though, was not happy to be awakened by hammering on the roof and someone ringing her doorbell to tell her she needed to move her car out of her driveway. Such is life.

Well, at least the walk was a pretty one and interesting (although too bad about a quiet home day, given the roofers' failure to show!). That low water level is really disturbing, It sounds like your Thames walks will be interesting and looking forward to the next!