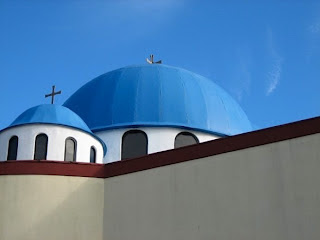 It could be Santorini, but it's not - it's Queens! Astoria was my goal when I went exploring on Sunday. It's a heavily Greek neighborhood in northwestern Queens along the East River, where the ornate porch railings and the white lacy curtains in the windows definitely bring Athens to mind. Of course, this being New York, other cultural influences are there, too. For example, when I got hungry, I stopped in at the Neptune Diner for some lemon meringue pie. I suppose I could have had spanakopita or baklava somewhere, but what can I say? I wanted comfort food.

Astoria is a popular alternative for Manhattanites seeking less expensive housing, and I can see why - it's vibrant and interesting, with nice parks along the river between the Triborough and Hell Gate bridges. It's also known for German-style beer gardens, and the Steinway piano factory is located there. More exploring is in order!

I saw several more movies over the last few days. (I'm going to start calling this feature "Steve's better-late-than-never movie reviews.") I finally got to "Dreamgirls," which I thought was kind of boring, frankly. The performances were excellent, with Beyonce looking amazingly Diana Ross-like and, of course, Jennifer Hudson belting out the signature song. But I've never been a big fan of that show, and I was underwhelmed. On the other hand, I loved "Blood Diamond" and "Notes on a Scandal." I thought the ending of "Blood Diamond" took an unnecessarily sentimental turn, but Leonardo di Caprio and Djimon Hounsou do great jobs. And of course Judi Dench in "Notes" is brilliant - as brittle as her character can be, we still sympathize.

It's very frustrating that studios stack up all the good movies for release at the end of the year. It turns moviegoing into a marathon. Whew!
Posted by Steve Reed at 10:39 AM