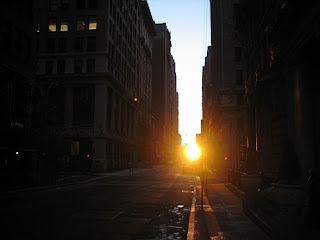 We're back in New York with today's photos...back on the street where I live, in fact. I've noticed in the past week or so that the sun seems to rise almost exactly at the end of the street, over the East River. It blazes up, a big orange ball, and sends its rays down the center of the road, no doubt causing a lot of cursing among eastbound drivers on adjacent streets. (Fortunately, my street runs one-way westbound. I wonder if the setting sun does the same thing?) 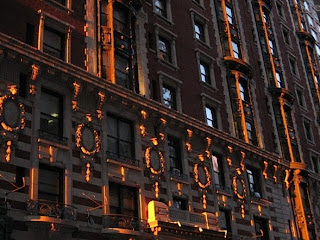 When it first appears the sun just skims the buildings, giving only select bits a warm glow. This is the Carlton Hotel, an ornate, recently renovated hotel at Madison Avenue and 29th Street. I've never been inside, but one of these days I'm going to check it out, because it was under renovation for a long time and looks quite swanky. There's a promising-looking restaurant in the basement called, ironically, Country.

I took these photos on an icy morning last Saturday, and a few minutes later actually slipped and fell on the sidewalk, causing a perfect stranger to ask if I was OK. Come to think of it, that's the same day I later dropped my camera. I hope I've used up my annual quotient of klutziness!
Posted by Steve Reed at 10:37 AM