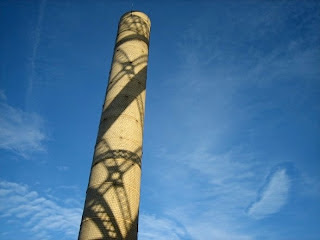 I took a little trip out to Queens on Sunday to explore some neighborhoods I'd never visited before, and then walked back to Manhattan over the Queensboro Bridge. The bridge connects Long Island City, in Queens, with Manhattan's Upper East Side. When the bridge passes over Roosevelt Island, there's something like a power station right next to it, and the bridge girders threw some fantastic shadows on the smokestacks. Any good Scot would be proud of that plaid!

The Queensboro Bridge is also known as the 59th Street Bridge, which, as fans of Simon & Garfunkel will know, is the locale for "The 59th Street Bridge Song," aka "Feelin' Groovy." So, yes, walking across the bridge, I did indeed sing that song to myself, as probably thousands have done before me. Not very original, but it matched my mood for the day, which was basically groovy. 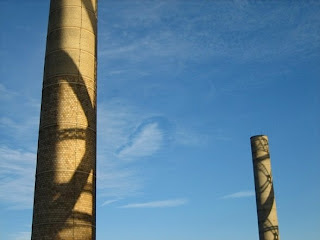 I've now walked three of the four bridges connecting the east side of lower Manhattan to Long Island: the Brooklyn Bridge, the Williamsburg Bridge and the Queensboro. I've never walked over the Manhattan Bridge, which is located between the Brooklyn and Williamsburg bridges. (Are you diagramming this yet?)

Another place you may have seen the Queensboro: There's a famous scene in Woody Allen's movie "Manhattan," where he's sitting with Diane Keaton on a park bench watching the sun rise near a vast bridge. That's the Queensboro. A photo of that scene is on the movie poster.
Posted by Steve Reed at 12:02 PM