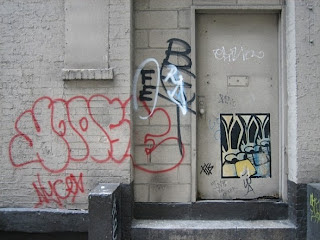 This wall is just a short walk from my apartment, but it's been painted over since I took this photo - all this graffiti is long gone. The poster with the bizarre, manic rabbits is by the street artist Branded. They're very common all over the city and come in many subtly different varieties.

I finally went to see "Babel" last night. What a great movie! It's been out for weeks and weeks, so I expected to be the only one in the theater - but no, the place was packed. I was eager to see it because much of it was filmed in Morocco, and I lived in Morocco for more than two years as a Peace Corps volunteer in the early 1990s. I wanted to see how the country was depicted and listen to the Berber language again.

I must admit I didn't really hear any Berber, though it was allegedly in the film. (My Berber language skills have grown incredibly rusty, and the dialects vary from place to place - it may have been a variety very different from the one I spoke, called Tashelhait.) Most of the characters in the Morocco sequences used Arabic, which I never spoke well. But it was still great to see the landscapes and the people, and the film was a provocative exploration of cultural divisions. The themes were very similar to those in "The Sheltering Sky," by Paul Bowles, one of my favorite books.

I'd really like to get out and take some photos this weekend, if I can overcome my cold and the somewhat drizzly weather. (I think it's supposed to clear up later today.)
Posted by Steve Reed at 11:12 AM