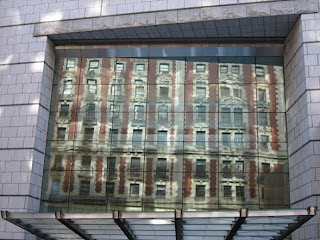 Fox & Fowle’s towering Conde Nast building opened on Times Square in 2000. Its glassy entrance reflects its older neighbor, the former Knickerbocker Hotel, across 42nd Street. The Knickerbocker, where Enrico Caruso and George M. Cohan once lived, was designed by Marvin & Davis and finished in 1905.

On my way to work yesterday, I noticed lingering traces of the New Year’s Eve festivities in Times Square. There was a sort of after-party desolation to it all. The utility trucks were still parked along Seventh Avenue, empty of promise, waiting to be rolled away. On the rooftops of the Broadway theaters, little cyclones of leftover confetti were swirling in the wind and collecting in puddles of rainwater.

Confetti leftovers were also lying dead on the subway tracks in the Times Square station. Some of those little squares, I noticed, bore the bull’s-eye trademark of Target stores. How ingenious is that marketing? Talk about finding value in clever places. (And see - it earned Target a mention in my blog!)

Got a funny piece of spam in my work e-mail. The subject line: “Don’t waste your time, have sex immediately.”