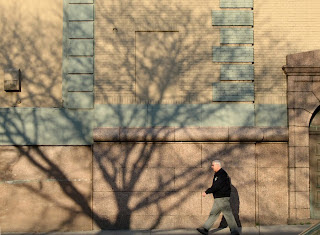 Several months ago on BlueJake, his excellent photography Web site, Jake Dobkin mentioned the concept of "punctum," and it's been rolling around in my head ever since.

In "Camera Lucida," Roland Barthes argued that punctum is a quality that must be present in an effective photograph. According to Jake, Barthes defined it as "that accident which pricks, bruises me."

Jake added: "It's a hard concept to pin down, but I've come to think of it as a certain detail in the picture that animates the composition. Without punctum, photos can be beautiful in a formal sense - with symmetries and color and so on - but they feel dead. They don't draw you in."

Jake said he believes punctum is most easily triggered by images we can relate to, such as those of people and animals. It's harder to find in landscapes or architectural photography, and Jake suggested that one way to add punctum to an otherwise static composition is to wait until someone wanders into the picture. (He admits that this is "cheating," and the punctum it provides can be superficial.) 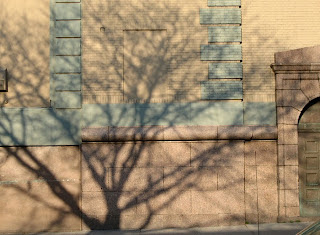 I've thought about this a lot as I wander the city taking photos. Sometimes I specifically ask myself, "Yes, it's a nice shot, but does it have punctum?" In this case, I thought I'd experiment by taking one photo with a person and one without.

Admittedly, the person in my first photo is not the most interesting fellow. But I think Jake is right - in comparison, it is a more interesting picture. I think the second shot would have been fine by itself, but seen alongside the first, it looks awfully empty.

Then again, much of this depends on the photographer's goal. In my case, emptiness, transience, stillness and spaciousness are qualities that I try to convey in my photos, which I take with an eye toward advancing Buddhist ideas. So for that purpose, the second image may be the better one.
Posted by Steve Reed at 10:41 AM