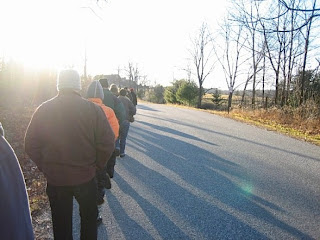 Here we are in 2007. Yikes - how did this happen? Remember when “2001: A Space Odyssey” was set in a far-off time we had yet to reach? And now we're six years past that, already inhabiting our own distant future.

You may remember my plan to spend New Year’s Eve in Connecticut, on silent retreat with my Zen group. Well, I’m trying to figure out what to write about the experience that wouldn’t sound utterly banal. To say it was great, or calming or meaningful, or that it renewed my bonds with my fellow practitioners, just doesn’t measure up. All of those things are true, but they don’t even scratch the surface.

I never know what to expect when I practice. Sometimes I sit and all sorts of tension comes up, and that was happening when I got to the retreat on Saturday. I found myself wrestling with “shoulds” - I should sit more frequently and more effectively, I should participate more skillfully in services, I should know more about the intricacies of Zen than I do. “Shoulds” are a common plague for me. I forget to just let things be what they are, and forget the value of not knowing.

So, at a teacher’s suggestion, I just sat with that “should” feeling. Not pushing it away, but trying to breathe into it, trying to reach the deep internal part of me that holds the tightness of “should.” Siphoning it off, bit by bit. 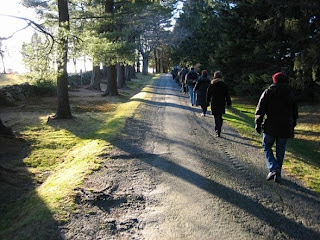 By the next morning, after many periods of silent sitting, I felt I could literally breathe more deeply - like I’d long been filling my days with short, shallow breaths, and could finally, slowly, open myself to the air. It wasn’t just relaxation - it was an expansion, an awareness.

I brought that feeling to our New Year’s Eve celebration, which included an interesting outing, depicted in these photos. We lined up single file and silently walked to a field in a forest near our retreat center, where we held a little ceremony. We thought of things we’d like to leave behind with the turn of the year - an unskillful habit, a behavior or thought pattern lacking in mindfulness. We wrote them on slips of paper and burned them in an aluminum pan, releasing them to the air and the earth, to the past.

Then we walked back to the retreat center for some ceremonial bell-ringing and, once we could speak again, a small party. I didn’t even try to stay awake until midnight. I figured the New Year didn’t need me around to see it in - it would be there when I woke. And it was.
Posted by Steve Reed at 10:18 AM