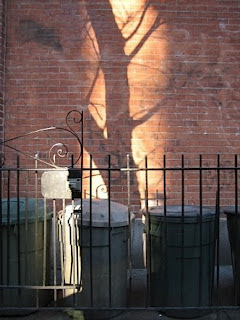 This narrow bit of light framing the even narrower tree trunk was, well, perfect!

I'm glad that Rep. Keith Ellison, a Muslim from Michigan, stuck to his convictions and was sworn into the U.S. House of Representatives using the Koran. It's a testament to this country's diversity and religious freedom. It was especially brilliant that he used a Koran owned by Thomas Jefferson, making it clear that our more reasonable forefathers were not afraid of other faiths.

I read an article contending that Jefferson owned this Koran only to better understand "his enemies," the Barbary pirates, and that its presence in Jefferson's library was otherwise insignificant. But that both sells Jefferson short and introduces a red herring: Keith Ellison is a Muslim, but he's hardly a pirate! By which I mean that whatever disagreements we have with the Muslim world, they are not with Islam, but with individuals - some of whom are extremists arguably deviating from the Muslim path.

I am fighting a cold. It started in my throat, moved to my nose and has now settled into my chest. As Queen Victoria would say, at least in mythology: "We are not amused."
Posted by Steve Reed at 10:48 AM