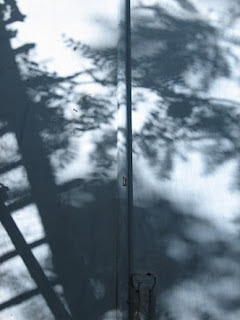 Looks a bit summery, doesn't it? Just thought I'd whet your appetite for warmer weather and feathery shadows of leaves.

I finally got to go to the Zendo last night - the Zen center where I practice - after about two weeks away. It was so nice to be still after a long period of hyperactivity. I felt much clearer and calmer after three periods of sitting. Whenever I have a gap in my practice like this, I always leave wondering why I allowed it to happen.

It can be hard to sit in the daily rush of activity - it always seems like the one thing that can be put off until later, which is kind of funny, because it has such a profound effect on my state of mind. Why don't I put off making the bed?
Posted by Steve Reed at 10:57 AM