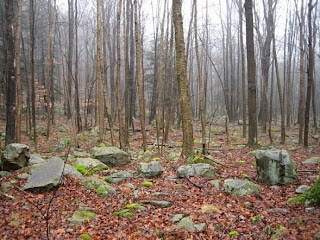 Sorry for abandoning the blog yesterday. I went for a weekend visit to the Poconos, in northeastern Pennsylvania, where some friends own a vacation house. I thought I’d post an update from there, but they didn’t have a computer handy - and it’s just as well, because it broke my Internet habit for a day.

Their house, near the town of Gouldsboro, is surrounded by these woods. The weather was chilly, misty and gray all weekend. We got out a little - we drove the winding roads to Skytop Lodge, a luxe hotel, where we had French onion soup and locally brewed beer. We visited the desolate wreck of an abandoned honeymoon lodge where I was dying to take photos, but of course I’d left my camera back at the house. (Note to self: NEVER leave camera behind!)

With the weather so damp, we spent most of the weekend watching DVDs. It was a “camp-out,” or maybe a “camping trip” - we watched “Valley of the Dolls” (one of my favorites, you'll remember) followed by “Mommie Dearest.” Imagine seven gay men watching two of the campiest movies ever made. Too many of us knew all the lines. It was frightening. 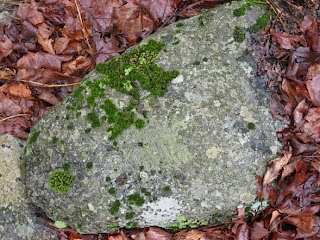 It got me thinking about the nature of camp, that invisible line between tragedy and comedy. When does a movie break down the wall between drama and melodrama, becoming SO dramatic that it’s actually hilarious? I’d never seen “Mommie Dearest” before this weekend, and parts of it are genuinely horrifying - but then Faye Dunaway gets a crazed look in her eye, flexing her red-nailed claws and lunging at her daughter’s neck - and you can’t help but laugh. It’s so over the top.

I’ve never read Susan Sontag’s “Notes on Camp,” but I think I should. I want to understand this better. I especially like the fact that almost all of us responded so strongly to one or both of these movies. That special marriage between gay culture and camp created a warm, almost familial bond as we sat before the fireplace watching Patty Duke screech at her co-stars. It was a nice antidote to the chilly damp of the woods outside.
Posted by Steve Reed at 11:31 AM