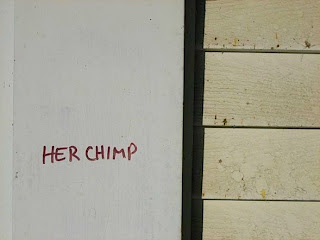 Someone wrote this on an exterior wall at the Montauk train station. I have no idea what it could mean. Is someone feeling badly treated? Insulting a romantic adversary? There’s a whole short story tied up in those two words.

Speaking of not knowing what something means, have you ever believed that you knew the definition of a word, and in fact used it quite confidently, only to find years later that you were totally off base? That happened to me yesterday. I was reading an article in the newspaper that mentioned someone living on “Nimrod Street.” I thought, why on earth would a street be named “Nimrod Street,” when “nimrod” means a stupid person?

Except that it doesn’t. I looked it up in Webster's New Collegiate Dictionary and it’s actually another word for a hunter, taken from the name of Noah’s great-grandson in the Old Testament.

Where, I wondered, did I ever get the idea that “nimrod” meant a dimwit? I looked around online and found another definition from the American Heritage Dictionary that proved me not entirely wrong: “(informal) A person regarded as silly, foolish or stupid.”

Here’s the interesting part - the dictionary’s explanation for that definition: “Probably from the phrase ‘poor little Nimrod,’ used by the cartoon character Bugs Bunny to mock the hapless hunter Elmer Fudd.”

I wonder what “ultramaroon” really means?
Posted by Steve Reed at 11:03 AM