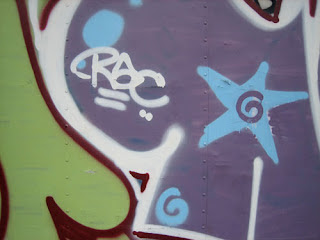 Graffiti painters seem unable to resist white panel trucks, I suppose because they're so big and blank and just CRYING OUT for decoration. This bit of graffiti was part of a much larger bunch of tags on a truck parked on 11th Avenue, near the Javits Convention Center.

I'm a bit late with my posting today because I've been on a train all morning, coming back from a quick visit to Washington, D.C. I went down yesterday to see my cousin Kristine, who is about to move to Sydney, Australia. The family gave her a little party last night, with Australian food like Vegemite and chocolate-covered cakes called lamingtons (sp?). For the record, I do not understand the appeal of Vegemite at all. (Perhaps my pal Pod can enlighten us?) 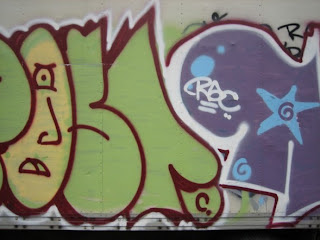 I also had lunch with my friends Liz and Kevin near Eastern Market, and wandered around the area east of the Capitol to do some photography. It was beautiful and clear and cold and windy, and quite fun until...

...I dropped my camera on Pennsylvania Avenue, jamming the lens and basically destroying it. I've been talking about upgrading to a better camera for a while, so my friends will be perplexed to know that instead of seizing this opportunity, I went right out to Best Buy yesterday afternoon and bought pretty much the same camera all over again. When it came down to it, I chose security - the certainty of what I know - especially given that I wanted to take photos last night at our party.
Posted by Steve Reed at 6:23 PM