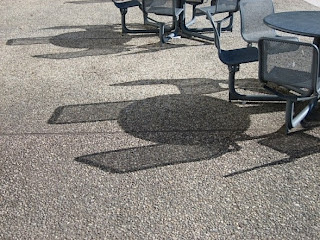 The shadows from these tables and chairs look like some kind of giant swans, with wings spread. I picked up a lot of blank space in the foreground because there was some stuff at the top of the photo that I wanted to avoid. At first I thought it was too much blank space...but then I decided I liked it.

When I was in the Peace Corps in Morocco, my high school friend Kevin - who I visited on my trip to D.C. last weekend - was one of my most faithul letter-writing correspondents. Kevin was about to start his own Peace Corps adventure, so I suppose he was sensitive to the plight of a poor overseas aid worker sequestered in some dusty village.

In one of his letters, Kevin sent me an article by a guy named John Weir from the January 1993 issue of Details. Titled "Getting a Life," it was all about the paths Weir and his friends took after graduating from college, trying to make their way in the world.

Something about that article really spoke to me. I guess I identified with it, being not long out of college myself. I read it and kept it, and in fact I'm holding it now, a battered photocopy with Kevin's letter still attached and the staple coming out. I kept an eye out for other things by Weir, occasionally seeing short pieces in magazines or anthologies, but oddly, it wasn't until last year that I bought his two novels, "The Irreversible Decline of Eddie Socket" and "What I Did Wrong." I read them over the past month or so.

I liked "Eddie Socket," the story of a young, artistic, slacker-ish gay guy in New York City during the dark days of the AIDS crisis in the 1980s. It was not a happy book, but it made good reading. Weir wrote it more than 15 years ago, and then didn't publish another book until "What I Did Wrong," which came out last spring. I was less impressed with "Wrong," which was more like a non-linear series of related vignettes. Where "Eddie Socket" was all youthful energy and angst, "Wrong" was middle-aged malaise and regret. In a note on Amazon, Weir said he initially wrote a large amount of text and then cut it down to its current length, and I understood then why it felt a little jumpy. It seems like parts of it are missing.

Still, I was happy to find more work by John Weir. I remain an admirer.
Posted by Steve Reed at 10:16 AM