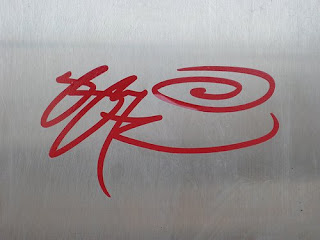 Yesterday I wanted to explore a part of the city I hadn’t seen before. So I hopped on the F train and went way out into Brooklyn, to Avenue P. From there I walked south along Stillwell Avenue through Bensonhurst, all the way to Coney Island. (With many little side trips.)

I visited Avenue P once before, last summer, but had to leave after just a few minutes because of rain. (My pals Lettuce and Squirrel were getting rained out at Coney Island on that very same day.)

I’ve always been curious about Avenue P because of “Really Rosie,” a children’s TV special developed by Maurice Sendak and Carole King back in the 1970s. I don’t ever remember seeing it as a child, but I was introduced to the music in the ‘80s by my friend Suzanne, who knew I loved King’s music. Rosie, a little girl who yearns to escape her boring childhood and be an actress, lives on Avenue P.

Surprisingly, I didn’t find a whole lot of terrific graffiti out there -- just lots of uninspiring tags. But once I got to Coney Island -- which I had visited before -- I found some good street art, and lots of other pictures as well. Coney Island looks even more desolate these days, with its amusement park now shuttered for redevelopment.

The tag above was on a phone booth. It could almost be a piece of Zen calligraphy -- disciplined and yet so simply and thoroughly an expression of the moment.
Posted by Steve Reed at 11:49 AM