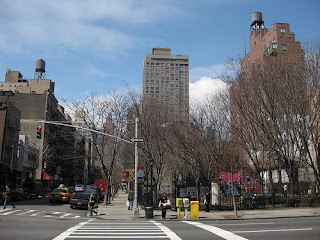 Not long ago I rented a movie called “The Boys in the Band." It’s considered a groundbreaking movie, from 1970, about gay men and gay culture. By today’s standards it’s overwrought and it reinforces some undesirable stereotypes, but it was hugely progressive at a time when gay men were still considered inherently mentally ill.

Anyway, there’s a short outdoor scene with one of the characters standing on a street corner holding a casserole, trading dirty looks with a large woman. Behind them is a small park. The Empire State Building looms in the background. I paused the movie and tried to figure out where that scene could have been shot. And then I realized -- it’s on my street! 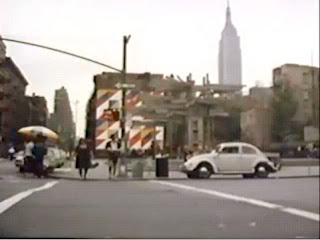 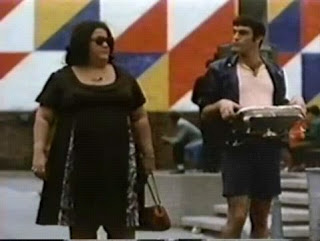 As you can see in my photo, there’s been quite a bit of construction in 40 years. The view of the Empire State Building is now blocked by that red brick building on the right -- the tip of the ESB's spire is just barely visible to the left of the water tower on the brick structure's roof. That tall beige monstrosity in the background (which is right next to my building) came later, too.

The mural behind the two characters in the movie was the real giveaway. A matching companion mural remained on one of the park’s walls until last year, when it was covered over with beige paint. Here’s a shot of it from 2006: 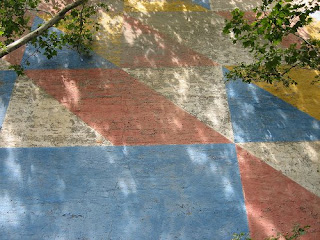 Cinematic history in my neighborhood!

If you're really interested and you'd like to watch the clip, it's here. The corner shot appears at 4:08.
Posted by Steve Reed at 2:24 PM