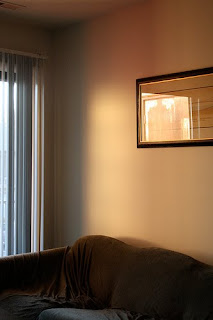 Well, I'm back in New Jersey, sitting on the couch in the early morning light with Ernie snoring beside me. I had a good couple of days in New York, walking and photographing. I'm now stocked up with enough photos to last the next few weeks.

We had a little crisis at my apartment building in New York. When I got there on Thursday I found a legal notice pasted to the front door by Con Edison, saying our power bill had not been paid and the electricity would be turned off. I'm the co-op board president, so I contacted the managing agent, who initially said the bill was current. But then I called Con Edison directly, and they said we were more than $10,000 in arrears.

I called the managing agent back, and after further investigation he said we'd run short of money in January and February and simply hadn't paid the bill. After picking myself up off the floor, I said, "Were you going to tell the board about this?" (We have access to a line of credit where we can borrow money in case of such emergencies.)

The whole episode left me dumbfounded and utterly seething. I still don't have an explanation for why the manager initially said the bill was current, and then changed his story. It's clear to me that he and his staff don't know what the heck they're doing, and I shudder to think what would have happened if I hadn't come home Thursday and found that notice.

My term on the board is ending in May, and I've decided not to run again, since I'm not sure whether I'm going to remain in the building or sell my apartment. This latest saga makes me want to get the heck out of there.

(Photo: Corner of our living room in New Jersey, one morning a couple weeks ago.)
Posted by Steve Reed at 10:57 AM

The managing agent probably thought he could pay the bill before you found out? That is so crazy. Good thing you stopped by.

This is not an unusual thing in dealing with management...Perhaps it is all the more reason for you to stay on until the unit is sold...

Gasp!! Ten thousand dollars behind with the electricity bill.. And I thought we had problems with our OC manager. I can understand you not wanting to be on the board again.
Ms Soup

You trust people to be responsible and do their jobs. But sometimes they don't as you found out. I hope the manager was at least embarrassed to be caught in a lie. At a minimum, perhaps the condo should get a new managing agent.

I wonder if somone is skimming some money out of the account. Hmmm