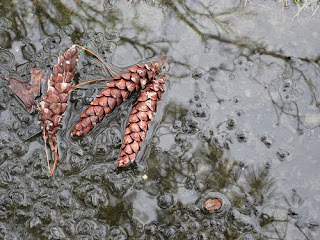 Yesterday was pretty nondescript. It rained all day, so I stayed inside reading "The Omnivore's Dilemma" and taking care of a few things around the house.

I'm enjoying the book -- I was fascinated to learn that the United States experienced a surfeit of corn in the early 1800s, which led to an explosion in the availability and consumption of corn whiskey. Apparently people were real drinkers in the first half of the 19th century, even more so than in later years. Who knew?

Of course, the main goal of the book is to point out all the problems with our present-day industrialized food stream. I like to think I'm a pretty healthy eater, since I usually buy fresh produce, meat and dairy as opposed to all the processed stuff. But even fresh products in a supermarket are tainted by their origins in factory farms, slaughterhouses and feedlots. I can only hope the author gives me some ideas about how to eat more conscientiously -- I'm sure that will mean buying locally produced food, but how does one buy local in New Jersey in the middle of winter?

Another grain of food for thought -- our entire food-production structure, which has enabled the planet's population to balloon to the point it has, is heavily dependent on fossil fuels. What happens as those fuels become more scarce? Do we face a future where starvation is a possibility?

Today I'm going to tackle another chore and try to get Dave's car inspected. First we have to install a front license-plate bracket, because his car didn't come with one, and a front plate is required in New Jersey. Bureaucracy!

The Omnivore's Dilemma definitely raised my level of food consciousness and changed the way we eat. We buy all our meat from Polyface and it is noticeably different.

I'll be curious to see what you think by the end of the book.

Try shopping at Whole Foods. They are extremely conscientious, and yes, it costs more. Why did we ever come to believe that food is cheap? It's not.

I like Kim Y's label for the way she eats: she is a flexitarian. I like that.

Dave you are correct about Steve. He is awesome.