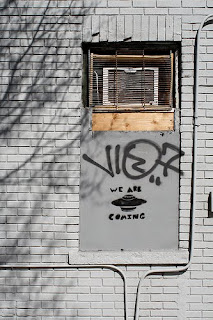 How many of you remember a TV show from the mid-'70s called "Space: 1999"? It starred Martin Landau and Barbara Bain in their post-"Mission Impossible" years, as astronauts stranded aboard a moon colony when a nuclear explosion blasts the moon out of orbit. It was syndicated and aired on independent channels around the U.S.

I watched it fairly regularly as a kid, but I hadn't seen it since. The other day I got to thinking about one particular episode involving a tentacled alien monster that ate several astronauts and spit out their smoking corpses. As you can imagine, that image vividly imprinted itself on my childhood mind. I think it gave me nightmares, but at the very least it creeped me out.

I went online and looked up an episode guide for the series. Sure enough, the episode was called "Dragon's Domain," from 1975. Assuming I saw it around that time, I would have been nine years old.

And imagine my excitement when I discovered DVDs of the entire series available on Netflix! Naturally I ordered "Dragon's Domain" immediately, and Dave and I watched it last night.

I'd forgotten so much about the series! For one thing, it was made in England, so everyone except Landau and Bain has a British accent. The costumes and sets are vaguely Kubrickian a la "2001: A Space Odyssey," though on an obviously much smaller budget.

My memory of this particular episode was surprisingly very accurate. The monster (obviously foam rubber, with a blazing headlight for an eye) ate the four astronauts in the order I remembered, and was killed the way I remembered. There was a lot of exposition in the middle that I naturally did not remember, but what do you want from a nine-year-old?

I always wonder what children would be learning if they didn't have television. If I hadn't invested my time, energy and brain cells in "Space: 1999," would I have learned more about my environment? Maybe I'd know the names of all the weeds in the front flower bed. Or maybe I'd have been bored and getting into mischief and bitten by a poisonous snake. Who knows?

i wonder if the scifi channel will ever pick it up!

Ahhh ... as my mother always used to say, even the beautiful rose needs manure to grow. There's nothing wrong with silly shows like that.

Sounds fun to me!

But did you have nightmares after your adult viewing of "Dragon's Domain"? It's pretty amazing what you can get on Netflix, yes?

I spent a lot of time watching cartoons as a kid and I really don't think it did much damage. I was a kid who badly needed a break from academic pursuits.

some of the acting was SO dire!

no, make that "most"

we had very limited TV when i was a kid--if our beat up old used TV broke, we went without until someone gave us another junky one. We never got a color TV --when I got my own apt you'd think I'd rush to buy a tv but I didn't care and didn't have one until I married someone who happened to have one (an old beat up one!) Now we have a nice one, but we cancelled cable, and only watch DVDs & local news/weather on it.

I never had any idea what people were talking about when they discussed TV shows, and I still don't. But I'm sure I can get Space 1999 on DVD, right?