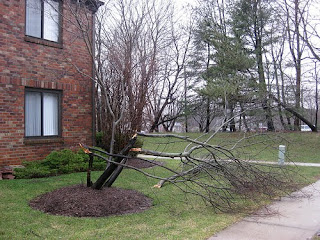 And I don't mean that in a good, nurturing way! We got hammered by a storm on Saturday that knocked out the power for about 25,000 people in East Brunswick, and left our tap water temporarily undrinkable. High winds knocked down trees (including this poor specimen in front of our apartment building), and it's raining more, even now.

Dave and I were home Saturday watching movies as the storm became more and more violent. Every once in a while the building would shudder and we'd look at each other and say, "Wow!" The wind and rain were so fierce that we had water coming in above our sliding glass door -- the wind blew it through the frame. It was like a low-grade hurricane.

We had tickets to a concert at the 92nd Street Y that night (ironically, replacement tickets for a performance we couldn't attend due to a blizzard), and we decided not to go. It's a good thing, because New Jersey Transit shut down the trains on Saturday evening, and if we'd gotten into the city there's a chance we couldn't have come home. Some poor passengers were stuck in trains immobilized on the tracks. I'm going to toss those tickets and call them a donation to the Y. I'm clearly just not meant to use them!

We tried to order Chinese food from our usual take-out place up the road, but they weren't answering their phone. Turns out they had no power. So we wound up making pasta.

Yesterday we had a friend over for dinner, and I'd just served everyone a big glass of ice water when Dave got word that school drinking fountains would be turned off today because of a boil-water advisory. Yikes! I'd been drinking water all day yesterday, including using the water fountain at the gym, and that was the first I'd heard of it.

I made my (hot but unboiled) coffee as usual this morning. I'd rather risk a dose of bacteria than forego my morning brew.
Posted by Steve Reed at 1:19 PM