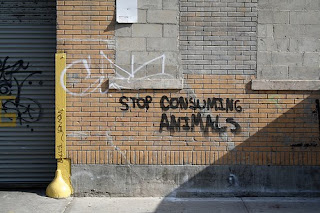 As I mentioned earlier, I've been reading Michael Pollan's book "The Omnivore's Dilemma," which is a look at the way we produce and consume food in America. It's most generally an indictment of industrialized agriculture, which we practice to the detriment of our health, environment, economy, family and society.

There's a lot of food for thought in this book, to make a bad pun. I learned a lot of little factoids I never knew before. For example, did you know that you can harvest enough "wild" yeast from the air to bake a loaf of bread?

But beyond the interesting factoids, there are greater issues to be considered. I especially appreciated Pollan's discussion of the ethics of eating animals, a topic I frequently struggle with, as my approximately four longtime blog readers know. Pollan concluded that the act of eating the animal may not be the most important question, but rather the way we eat the animal, and the way we raise and treat it during its life.

"The industrialization -- and brutalization -- of animals in America is a relatively new, evitable, and local phenomenon: No other country raises and slaughters its food animals quite as intensively or as brutally as we do. No other people in history has lived at quite so great a remove from the animals they eat. Were the walls of our meat industry to become transparent, literally or even figuratively, we would not long continue to raise, kill, and eat animals the way we do. Tail docking and sow crates and beak clipping would disappear overnight, and the days of slaughtering four hundred head of cattle an hour would promptly come to an end -- for who could stand the sight? Yes, meat would get more expensive. We'd probably eat a lot less of it, too, but maybe when we did eat animals we'd eat them with the consciousness, ceremony, and respect they deserve."

His conclusion coincides with the position I've reluctantly taken in my own life: That I'm going to eat animals, but I'm going to try to eat them wisely and sparingly. I once ate no animals at all, and I still believe I am more vegetarian than not by nature. But when I began to work out about 15 years ago, and felt I needed more protein, I began eating chicken and fish. Now, out of deference to Dave's passion for cooking all sorts of dishes including beef and pork, I've liberalized my stance even further, but I still try to be conscious of what I'm doing and the suffering I'm causing. Maintaining awareness leads to a healthy degree of moderation.

Overall, I think I'm a relatively responsible eater. I don't buy a lot of pre-processed food, and I don't patronize fast food joints or cheap restaurants. (Well, OK, the occasional diner!) I don't drink soda or consume a lot of empty calories. I'd like to shop more locally, and explore the area farm stands when they open this summer.

I try my best, and that's all any of us can do within the confines of the industrial system in which we live.

You are a responsible eater and a responsible human. If everyone was as thoughtful and ethical as you are, we would not have to worry about brutalized animals.

I'm also against experimenting on animals. I think of scientists wanted, they could figure out some other way to learn about humans and disease and all the other things they use as an excuse to torture animals.

I'm flexitarian. I eat animals but I do so mindfully.

The food chain is a bitch. Somehow we have forgotten that.

I'm glad you eat right, brother. Law of averages here though...your 'good' behaviors allow me to scarf down that much more red meat and not affect the average!

"There's room for all God's creatures...right next to the mashed potatoes!"

After reading this book, I find myself asking more frequently at the market "Where does that meat come from? Exactly how was it raised?" I'm willing to pay a little more to buy meat that was humanely raised and slaughtered (as if slaughtering is ever really humane). After you finish this book, move on to Jonathan Safran Foer's latest book "Eating Animals." A few more factoids to add to your collection.