Raised in a Barn 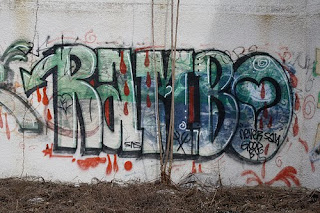 Last night Dave and I went to see a performance by The Shanghai Quartet here in East Brunswick. Of course the music was terrific -- they played Debussy, Elgar and Schubert, and a modern piece by Penderecki. That one was my favorite -- I could hear the interaction between each instrument, yet at times the piece seemed to buzz like a swarm of locusts. Pretty awesome.

I wanted to clobber the woman sitting in front of us, though. She was there with a little girl, probably five or so. When the music started the girl began swinging her arms in the air, mimicking the conductor, which was cute at first. But the mother did nothing to restrain the kid, and because she was directly in front of me she kept interfering with my line of sight. It went on and on, and I went from laughing at her cuteness to wanting to cut her head off.

During a break in the performance, another woman came up and asked the first to please "be respectful of the music and the musicians" and keep her child quiet. The first woman got indignant and insisted the girl was being quiet.

The show resumed, and pretty soon, the girl -- after twisting around in her seat to examine everyone around her, including me -- announced she was bored. The woman had become absorbed in a hand-held digital device, apparently texting or checking her e-mail. The girl said she wanted to leave, and the woman absently moved aside to allow the kid to traipse freely around the darkened auditorium.

After the girl returned a few minutes later, clomping up the steps next to our seats to resume her squirming, the mother began playing video games on her digital device. I couldn't believe it. And she wasn't entertaining the kid, either -- she was entertaining herself.

I seriously wanted to lean down and ask her why she was even there. Dave said she no doubt had a kid in the performance -- the middle and high school orchestras had opened the show, and some students played with The Shanghai Quartet during the Elgar piece. But still -- let's assume you went purely out of a sense of obligation to your child. Wouldn't you want to at least pretend to be listening? Wouldn't you be respectful of those sitting around you? And why would you bring a little girl who is clearly way too young for a classical music performance?

I was reminded of the time I went to Central Park with my friend Jan to hear the Philharmonic play, and people around us were blabbering. Argh! What is wrong with people?

(Photo: Graffiti by Rambo, which roughly depicts my attitude toward clueless theater-goers. Bushwick, Brooklyn, last week.)
Posted by Steve Reed at 10:57 AM

was this a hall with no ushers? someone should have dropped a dime on this mother immediately with one of the ushers and had them confront her.

and oh my god she was also texting!! another complete breach of not only etiquette but surely the house rules!

argh!!! if this ever happens again, you should also go to the box office explain what happened and ask for vouchers for another performance - that is dreadful!

I never hesitate to raise the consciousness of people in movies and at concerts and plays. I think they are completley unconscious of the fact that they could be rude. They usually get mad, but after that they're often self conscious and shut the hell up. So they will always hate me, that woman sitting behind them at the concert. It's worth it.

You wonder how people could get this far in life without a lesson in concert etiquette! And now the next generation is missing out as well in her case. I would probably have been pretty outspoken (at least by intermission). These are often the same people who tend to clap at the wrong places.

Have to agree with Reya. I'da told her to shut the hell up.

As fo clapping in the wrong places (see Barbara's comment) I am sure I would have clapped them both over the ears. Did that woman think she was at home listening to music?

Kim: I think the woman who asked the offender to be respectful actually WAS an usher.

Reya and JM: I considered saying something to her, I really did. But I thought it would probably just lead to an altercation, given her indignant response to the usher.

Barbara: I've given up on the clapping thing, particularly in a small-town concert hall like this. People have no clue when to clap.

Soup: I often wonder whether people just forget they're in public. We've all become so used to entertainment in our homes -- maybe some of us are losing the ability to adjust our behavior to consider the experience of others?

You handled it better than I would have.